“We don't realize they made off with almost the whole damn cake.” 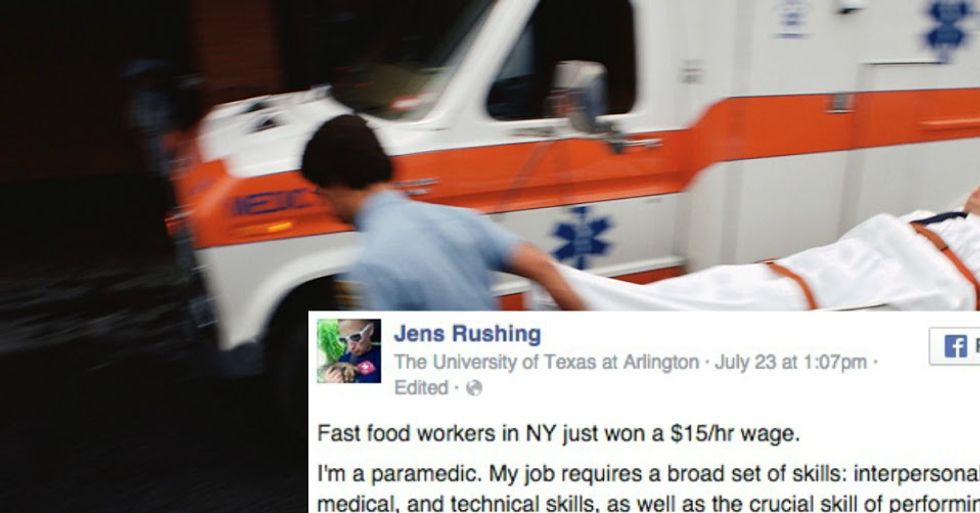 This article originally appeared on 01.02.18

Jens Rushing, like so many people, took to Facebook to rant about something. Rushing, a paramedic, wrote an impassioned post about fast food workers winning a $15 an hour wage two years ago that immediately went viral. But instead of getting angry that his skilled job pays him the same amount, he stood in solidarity with the underpaid workers and had this to say to everyone complaining about the wage increase: “That's exactly what the bosses want! They want us fighting over who has the bigger pile of crumbs so we don't realize they made off with almost the whole damn cake."

Although originally published a while ago, the post is still being shared daily by thousands of people. Check out the full message below:

I'm a paramedic. My job requires a broad set of skills: interpersonal, medical, and technical skills, as well as the crucial skill of performing under pressure. I often make decisions on my own, in seconds, under chaotic circumstances, that impact people's health and lives. I make $15/hr.

And these burger flippers think they deserve as much as me?

Look, if any job is going to take up someone's life, it deserves a living wage. If a job exists and you have to hire someone to do it, they deserve a living wage. End of story. There's a lot of talk going around my workplace along the lines of, “These guys with no education and no skills think they deserve as much as us? Fuck those guys." And elsewhere on FB: “I'm a licensed electrician, I make $13/hr, fuck these burger flippers."

And that's exactly what the bosses want! They want us fighting over who has the bigger pile of crumbs so we don't realize they made off with almost the whole damn cake. Why are you angry about fast food workers making two bucks more an hour when your CEO makes four hundred TIMES what you do? It's in the bosses' interests to keep your anger directed downward, at the poor people who are just trying to get by, like you, rather than at the rich assholes who consume almost everything we produce and give next to nothing for it.

My company, as they're so fond of telling us in boosterist emails, cleared 1.3 billion dollars last year. They expect guys supporting families on 26-27k/year to applaud that. And that's to say nothing of the techs and janitors and cashiers and bed pushers who make even less than us, but they are as absolutely crucial to making a hospital work as the fucking CEO or the neurosurgeons. Can they pay us more? Absolutely. But why would they? No one's making them.

The workers in NY *made* them. They fought for and won a living wage. So how incredibly petty and counterproductive is it to fuss that their pile of crumbs is bigger than ours? Put that energy elsewhere. Organize. Fight. Win.

The original post, which has been shared over 48,000 times, can be found here.