TOMORROW WE DISAPPEAR chronicles three years in the life of the Kathputli colony’s resident artists, acrobats, magicians and more—and the looming evictation that threatens their traditional way of life. 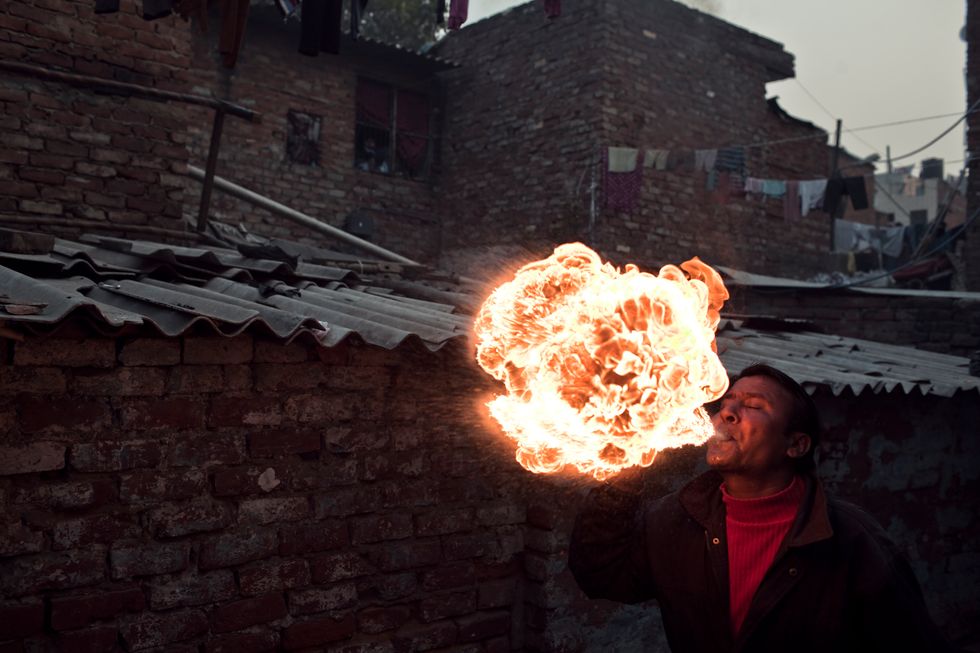 Gentrification is not a new concept. From the industrial revolution’s displacement of indigenous peoples to today’s affordable housing shortages in London and New York City, mass culture (and real estate) often has little sympathy for the underdog. As one of India’s most vibrant communities succumbs to “the market” and faces eviction, two young filmmakers decided to capture the waning days of the once-thriving micro-city. TOMORROW WE DISAPPEAR charts the soon-to-be-displaced Kathputli colony, an enclave of magicians, acrobats, poets, and puppeteers in New Delhi made famous in Salman Rushdie’s Midnight's Children. As they learn of the city’s plans to turn their home into a skyscraper, we watch as these entertainers fight to preserve their uniquely off-beat, traditional way of life alongside India’s rapid industrialization. Kathputli, more than just a mythic hand-built artist commune, is also an incubator and homebase for over 2,800 families. The film, created with a loving hand by Adam Weber and Jimmy Goldblum, charts three years in the life of the colony as it braces for its looming eviction.

To the unimaginative eye, the Kathputli colony looks like just another one of India’s many slums. As a press release put it bluntly, “flies swarm its putrid canals and children climb on drooping electrical wires. Construction cranes and an ever-expanding Metro line loom on the horizon.” But take a closer look and you’ll see a world that has been sheltered from the corrupting effects of modern life for over half a century. In 2009, the local government sold Kathputli to developers with the hopes of turning what they considered an eye-sore into an international destination. The film captures the heartbreak, but hope, of these artists as they face the encroaching modern world. “We are honored to share the story of Kathputli with a worldwide audience,” said directors Jimmy Goldblum and Adam Weber. “It tells a universal story of working class people being forced out of neighborhoods they have called home their entire lives.”

When India loses this colony it will also lose part of its history in the way of its legendary jadugars, street performers who have trained in the ancient traditions of magic. The documentary, which premiered at the 2014 Tribeca Film Festival and Hot Docs International Documentary Festival (and is now available on all major VOD platforms) is both heartbreaking and inspiring. In it, we follow three of Kathputli’s most-talented performers as they contend with the reality of their approaching eviction. Puran Bhatt was initiated into the world of puppetry from his late father, Manoram, the first president of the Kathputli Colony. Over his lifetime he’s traveled to over 25 countries to perform, and in 2003 won India’s prestigious Akademi Award for traditional arts. In the film, Puran fights the city’s plans for redevelopment by writing letters to the government, organizing a giant protest parade with 15-foot puppets marching through the bustling streets of Delhi, and attempting to convince poorer residents not to sign away their rights. Another protagonist, Rahman Shah, greets each morning with a street performance and magic show that is both comedic and gruesome. We watch as policemen coerce bribes from him, and as he wrestles internally with whether he wants to pass on this life to his two impressionable sons. The acrobat Maya Pawar, however, feels that Kathputli has stagnated. She abhors the colony’s mistreatment of women, and the way it has nurtured a generation of broken artistic dreams. All together, they paint a nuanced picture of a way of life on the way out. As the creators of the film notes “Our story begins with the fate of thousands of marginalized performers in Delhi, India. The film chronicles a turning point in the lives of these performers, with the hopes of anticipating what’s to come in India’s future and preserving what’s being left behind.”

The film is currently available on iTunes and directly through its website at www.twdfilm.com.