Being ready for class now includes learning how to respond to an active shooter. 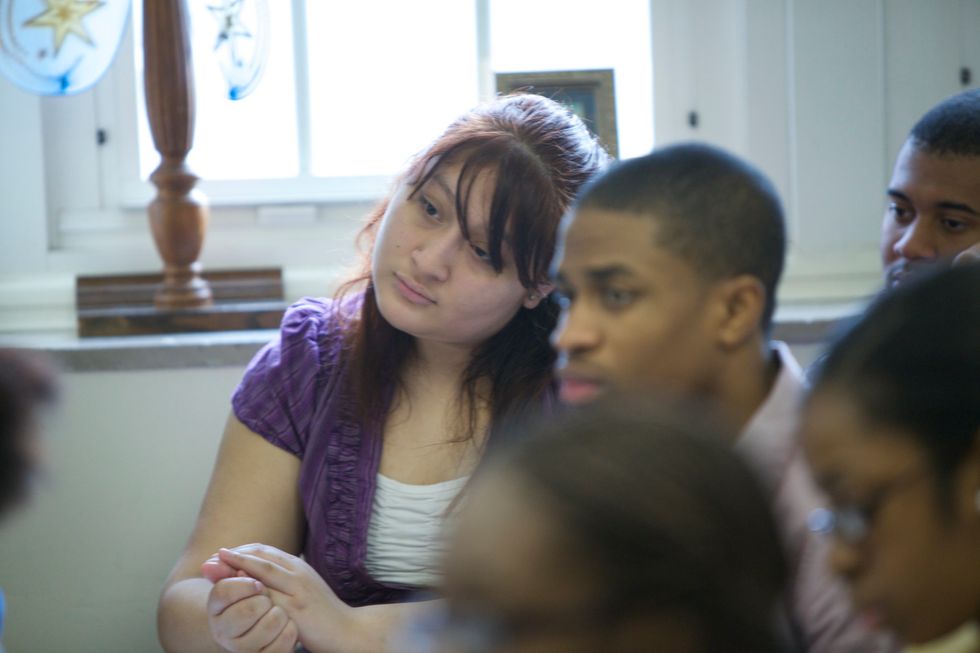 Photo by U.S. Department of Education/Flickr.

High school orientation is for finding your assigned locker and making sure the combination opens it, getting your schedule of classes, and signing a form that says, yes, you will follow the draconian dress code. But along with those typical activities, some parents are finding that some campuses are using orientation to give students information on an unexpected, but necessary, topic: surviving an active shooter.

On Aug. 8, a Twitter user named Buffy the Psych Prof expressed disbelief that her daughter was trained at her high school orientation about what to do if someone has a firearm at school. The Twiter user, who says she works as a psychology professor, wasn’t exactly thrilled with how normalized it’s become in the U.S. to teach kids about what to do when someone has a gun at school.

She tweeted that her daughter had been trained in the ALICE — Alert, Lockdown, Inform, Counter, Evacuate — method. Since 2001, the Ohio-based ALICE Training Institute has taught this way of responding to an active shooter to about 1 million Americans.

ALICE was created in 2001 by a law enforcement officer whose wife was an elementary school principal. Since then, students and staff at about 3,700 K-12 schools nationwide have been trained in the method. "Our vision is to empower all citizens with the skills and knowledge to respond when shots are fired," says the ALICE Training Institute website. "If the police cannot be there in time to help, the next best thing is to prepare our civilian population to help themselves until public safety arrives."

Buffy the Psych Prof wrote on Twitter that, during the ALICE training, her daughter “learned that she should throw books & desks & hide in order to save her life. Because that’s protection against an AR-15, right?”

Moreso, Buffy was outraged over the message the training seemed to be giving the students. “‘It’s like they were preparing us for battle, not high school.’ MY KID SAID THAT,” she tweeted. She went on to make an observation that so many other Americans have made: “Look how normalized this has become.”

As Buffy points out, school is hard enough without having to worry about getting shot. Now kids have this “added layer of fear and worry because people have a hard-on for a piece of metal designed to only do one thing: kill,” she wrote.

Some folks might see the need for ALICE training and drills and applaud it because of the 233 school shootings in the United States since 2013. Meanwhile, the NRA is busy making ISIS-style recruitment videos, and teachers are misguidedly being trained to carry guns in school — so it can feel like active shooter drills are just an inevitable fact of life. But several fed-up parents and educators responded to Buffy, sharing that they find the psychological effects of active shooter drills on children problematic. One mom tweeted that her kid doesn’t always know that the drill isn’t real.

A special education teacher tweeted that it takes her students “weeks to recover” from the drills.

“I signed up to teach grammar and Shakespeare, not how to shelter in place,” tweeted another educator.

And a first-grade teacher’s struggle with keeping her students quiet is heartbreaking.

As a kid growing up in the Midwest, we had drills for natural disasters, like tornadoes, and for accidents, like fires. When I became a classroom teacher in Compton, California, in the late-1990s, we still had fire drills. In California, earthquakes replaced tornadoes as the natural disasters we prepared for, and active shooters drills were added in.

During a drill, I’d have to turn out the lights in my classroom, close the door, lock it, and silently gesture to my students to quickly get under their desks and stay quiet — as if a shooter was supposed to think that no one was in the room at 10:30 a.m. on a school day. To get a classroom of rambunctious 8-year-olds to do this within 30 seconds took plenty of practice.

A few years later, when I moved to a role where I observed teachers and provided professional development at schools throughout South Los Angeles, I was in a classroom when an active shooter was present in the surrounding neighborhood. The school was on lockdown for nearly two hours. I laid on a floor in a classroom with the teacher and her students for that entire time. Some of the children urinated on themselves, and I thought I might too.

On the ALICE Training Institute website, the company offers tips for educators on how they should best arrange their classrooms, just in case an active shooter situation happens. No. 3 on that list is: “Consider arranging a low bookshelf to create a path into the class.” That will, apparently, create a barrier that will temporarily block the view of the person with a gun. That is the normalization that Buffy and so many other folks have had enough of. But until America gets serious about gun safety, it seems the days of teachers only having to think about teaching — and kids like Buffy’s daughter only having to think about learning — really are over.