Thanks To Trump, ‘Lawyer’ Is Now A Dream Job 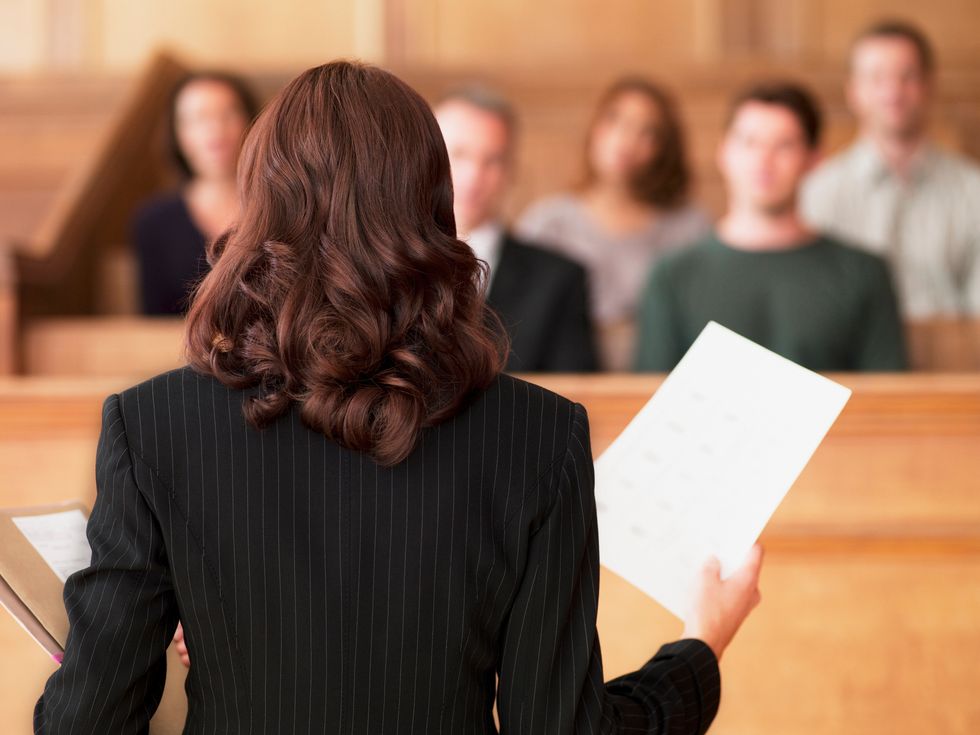 Last Friday afternoon, my Iranian grandmother was anesthetized in a white operating room, in a hospital in America, where a doctor removed the uterus that had housed my mother 62 years ago. At about the same time, our new president announced the United States would no longer be a home for millions of people like my grandmother, because of an attribute they were born with: country of origin as genetic defect.

[quote position="left" is_quote="true"]I kept an eye on the lawyer, because at that moment, he embodied equality, freedom, and fairness. [/quote]

The next day, my grandmother drank tea, reclining on her American hospital bed, as disturbing news reports and social media posts lit up my phone. Refugees and travelers from banned countries were being stopped at airports, turned away. America is the only country my family has called home since 1979 when we fled Iran. And now America had included my beautiful motherland, home of poets and jagged mountains, among the nations banned. All Saturday, I cried. I grieved. Iran then said it would take “reciprocal measures,” though it wouldn’t exclude those with valid Iranian visas, and I no longer had a grip on the meaning of “home.” My face felt hot, my body weak.

But in my despair, I remembered something important: I know America as intimately as I know my mother and grandmother, their bodies my other homes. I studied in its schools, I read its books, and years ago, I’d practiced law in its courts. On Sunday, I left my three-year-old twin daughters at home with my husband, their father. I rode with a friend to Los Angeles International Airport, where thousands of people held up signs that said, in various ways, “No,” that America is its people. America is me, and it is us.​

Among all the activists, I also saw a man in a suit with a sign that read “Lawyer.” I cried. I hadn’t gone to the airport with an agenda; I just knew that I couldn’t stand what our new president had done. I’d left the law to write fiction after my father’s death nearly a decade ago and hadn’t practiced since. But while the crowd chanted, “No bans. No walls. Sanctuary for all,” I kept an eye on the lawyer, because at that moment, he was the embodiment of what I believed in: equality, freedom, and fairness.

I thought of my grandmother in the hospital, how she became an American years ago under a different president, one I mostly disagreed with but with whom, in retrospect, I shared some core beliefs. My grandmother, like myself, was a citizen now, and I refused to let our family, or other families like ours, be tossed aside without a fight. I wasn’t ready to claim the law just yet, but at the end of that day, back at our apartment, I wrote to organizers online with offers of help, telling them: I speak Farsi. I’m a lawyer.

I worried. The truth is I speak Farsi only well enough to talk to my grandmother about her day. The truth is, my father died never recovering from being in exile. When he died, I vowed that I wouldn’t do the same, that I would recover by exploring who I really was: a writer, an artist. And even before I dropped the law, I would cringe (along with many other Americans, apparently) at being called a lawyer.

[quote position="right" is_quote="true"]I drove to LAX worried that my Farsi and legal skills were imperfect, listening to Iranians on NPR talking about heartache and havoc.[/quote]

But on Monday morning, I made a choice. After getting my daughters to preschool, I drove to LAX again without knowing if I would be needed, afraid that my Farsi and legal skills were imperfect. I listened to Iranians on NPR talking about heartache and havoc.

The morning was hot and sunny. I was wearing my new activist uniform: heavy-duty boots, waterproof jacket. I had an apple and full bottle of water in my bag. When I walked into the terminal, I immediately found the tables that had been set up for those offering legal help. Behind them, attorneys in discussion or typing on laptops. Almost all of them were women, in their own versions of activist uniforms. On the tables themselves, there were sign-up sheets for volunteers, forms to fill out while speaking to people detained or their family members. Afraid that my Farsi would be inadequate, I told one of the lawyers that I only spoke Farsi with my grandmother. She smiled and said that was great.

I borrowed a marker and wrote a message on a manila folder. It said in English, “Volunteer lawyer. Do you need help? I speak Farsi.” Feeling bold, I headed out to another terminal holding up this sign. Along the way, I was joined by other women lawyers, and we rushed around from one terminal to another. We put our bodies where the glass doors opened, available in case someone was questioned or detained. “I feel a little exposed holding this sign,” I said. The others nodded.

We headed back to the tables, which I was starting to think of as lawyer headquarters. There, an Iranian woman was crying; in Farsi, she said her sister had been detained. She and her sister had been in Tehran because their mother had a heart attack. But at first, I couldn’t quite figure out which tense she was using. Did her mother already have a heart attack—or was the woman worried the new president’s policy would give her mother a heart attack, in the way a heart is said to break from longing?

Both made sense to me.

Later, I stood with my sign near the area where those held by customs could exit by walking up a wide ramp. There, I spoke to a few young women from Iran who’d safely made it out, and recommended that travelers come through Abu Dhabi. Officials there were fair.

Suddenly, a lawyer approached, joined by an Iranian woman who’d just arrived. The lawyer asked if I could speak Farsi to her. Her cousin had a green card in good standing, but was detained anyway. We spoke in Farsi; the lawyer nodded and walked away. After she left, the woman offered to switch to English—she was American, too, after all.

“Of course,” I said; then, emboldened, “but I can speak either.” She responded in perfect English. So in English, I asked her for her name and her cousin’s name. She said, “Oh, do you want me to write it?” With a name like Sanam Mahloudji, I’ve said the same thing nearly my entire life. Though America is my home, it has trouble writing and reading me—and people like me.

[quote position="full" is_quote="true"]I have faith in the U.S. Constitution; I know that it’s greater than any one person, any one president.[/quote]

Don’t we all deserve that? I won’t let this new president take that possibility away, even if sometimes it feels like an impossible dream.

I plan on going back to LAX this week, though now that a federal judge in Seattle has temporarily blocked portions of the travel ban, I’m not sure what to expect. Just a few moments ago, the president’s officials were already appealing the decision.

But I know America. I studied in its schools. I practiced in its courts. I know its laws and its values. I feel a kinship with the 300 attorneys at the ACLU who must face the 19,000 attorneys our new president will have at his disposal. I have faith in the U.S. Constitution; I know that it’s greater than any one person, any one president. America is still my home, the home of my grandmother and my daughters—a home that will keep restoring itself and growing more just. But only if we stand up for ourselves, and for each other.