The Liquid Breakfast Of Champions At Canada’s Curling Championships

Getting tossed on gin, exploding mini outhouses, and other tomfoolery from the Brier 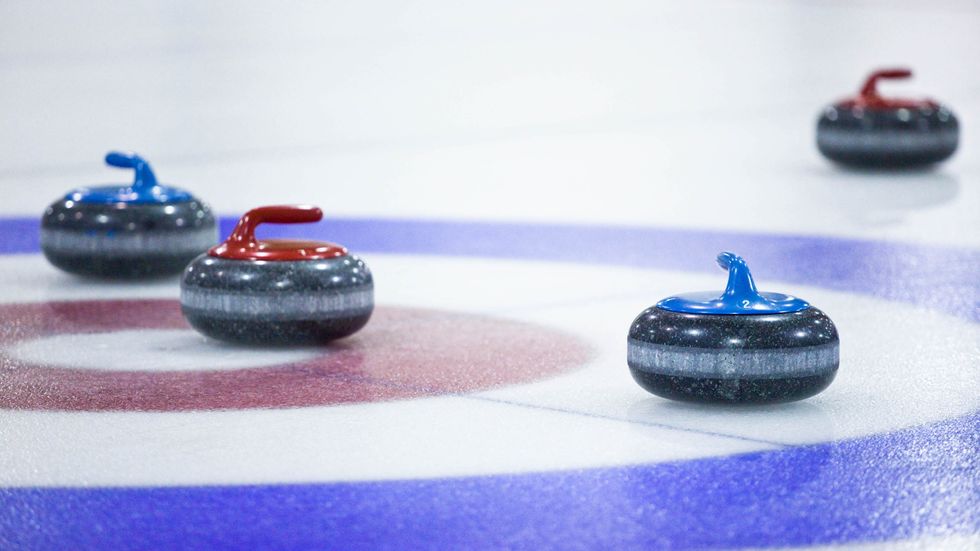 The instructions were vague: Morning Classes would be held at the Delta Hotel in St. John’s, Newfoundland, Canada, from 7:30 a.m. to 9 a.m.

“All I know is that it’s on the second floor, and it’ll be hard to miss,” Al Cameron, communications director for Curling Canada, said when pressed for more details.

That turned out to be true: a room on the second floor of the hotel hosting many of the players, staff, and attendees for the 2017 Tim Hortons Brier—the Canadian men’s national curling championship—was full, near to bursting even, with revelers at 8 a.m. on a Monday.

“Hawknesters” getting ready to serve up stiff drinks to the Morning Classes crowd. Photo by Terri Coles.

The Brier, which began in 1927, is an event steeped in tradition. The name itself comes from a brand of tobacco sold by the event’s first sponsor, the Macdonald Tobacco Company. Its mascot, the Brier Bear, was retired at the 2017 event after 37 years with the same man inside the suit. Fans meet up at the venue and outside the games to trade pins from past Briers. And each one of the events is accompanied by a Brier Patch, a party zone filled with curlers and curling fans alike.

Essentially, Morning Classes is a combination of a pregame ritual before the morning sporting begins and a bit of hair-of-the-dog to recover from the Patch the prior evening—thanks to the unnamed official drink, which resembles a Tom Collins without the simple syrup.

For Americans, this may be hard to fathom. Imagine if NBA players downed rum and Cokes moments before the championship tip-off, or if Roger Federer and Rafael Nadal sat down for a few prematch beers. Considering curling is akin to a mix of bowling, billiards, competitive sweeping, and darts on ice—that is to say, it’s a game of extraordinary skill and concentration—one might think drinking prior might hinder these championship-level curlers.

The unnamed gin drink at the center of Morning Classes. Photo by Terri Coles.

It’s true; these days, as the sport continues to advance, most Brier-level curlers are more likely to be found having a protein shake in the morning instead of a gin cocktail. But the revelry remains an entrenched part of the sport in Canada, and the hometown Newfoundland and Labrador team that eventually won this year’s Brier partied with fans later that night.

Morning Classes are both a reminder of the Brier’s hard-partying earlier years, when players would smoke during draws and Labatt was a sponsor, and a display of curling’s continuing function in small Canadian cities—not simply as sport, but as a social outlet. Curling clubs across the country are often social hubs, hosting a variety of events on and off the ice, and according to a 2014 survey by the University of Waterloo there are 700,000 curlers in Canada.

The event’s origins trace back to World War II, when the Brier was put on hold for three years. As attendees tell it, Collie Campbell left Northern Ontario for Gibraltar, where he served as an officer. Morale was understandably low among his men as they dug tunnels day and night, so Campbell decided to do something about it.

“He came up with this idea that to lift the spirits of the guys coming off the shift, or going on in, he gave them a shot of gin,” says Alfie Childs, a member of the organizing group tied to Thunder Bay’s Fort William Curling Club. When Campbell returned to Canada after the war, he got involved with the Brier as president of the Dominion Curling Association and brought this boozy tradition to the 1948 Brier in Calgary.

Morning Classes have been a feature of every Brier since, celebrating their 69th anniversary at the Brier in St. John’s, Newfoundland and Labrador this March. By virtue of not being served during wartime, the drink has become a bit more involved: An assembly line of volunteers scoops the ice, measures and pours the gin, squeezes in fresh lemon, and tops it off with soda. The servers wear plaid jackets that date back to the 1950s, when they were worn by a group of 15 men called the Hawknesters who assisted local Brier hosting committees.

To get your drink you’ll have to be a good sport. This year that involved getting sprayed in the face with a trick toy slot machine (the “prize” was a squirt of water in the face) and gratefully receiving a “diamond” pin made with a dime attached to a safety pin. The games of chance and tomfoolery—the “classes” aspect of the event—continue with puzzle teasers, exploding mini outhouses, and rope knots that only the demonstrator can seem to tie.

But the real draw is the socializing. Recreational curlers and curling fans from Northern Ontario travel to the Brier each year to hold Morning Classes, and, for many attendees, it’s a not-to-miss part of the Brier experience. Photos of past Morning Classes covered the walls of the Delta hotel room, and groups of attendees have come from across the country—and indeed the world, with Italy, Norway, and Scotland all represented. Saskatchewan fans dressed in green and yellow gathered around the games table, and local curling fans mixed with visitors from Nova Scotia and the Yukon.

This year’s Morning Classes seemed particularly well-suited to St. John’s, North America’s most eastern city and one known for having a downtown street boasting the most bars and pubs per square mile on the continent. “This has been our highest attendance so far of any Brier,” says Diane Buchan of Thunder Bay, who was handing out dog tags and manning the guest book of the classes in St. John’s, which this year played host to the Brier for the first time in 45 years.

The Brier was a resounding success, with the local team led by Brad Gushue ultimately winning the event and the chance to represent Canada at the world championship in Edmonton in April. But the 2017 Brier will end up being remembered for one more reason: According to the retiring Brier Bear himself, Reg Caughie, Morning Classes set its own record for attendance. This is perhaps not surprising considering Newfoundland and Labrador has the highest alcohol spending per adult in Canada, and drinks at Morning Classes are provided for free.

Caughie himself might have helped them get there. On the final weekend of the Brier he stopped by the Delta Hotel for some Morning Classes and a tart gin cocktail of his own, bear suit and all.