How to Choose the Right Alternative-fuel Car for You

Click above to launch our handy flowchart, "How To Choose the Right Alternative-Fuel Car For You." More Burning... 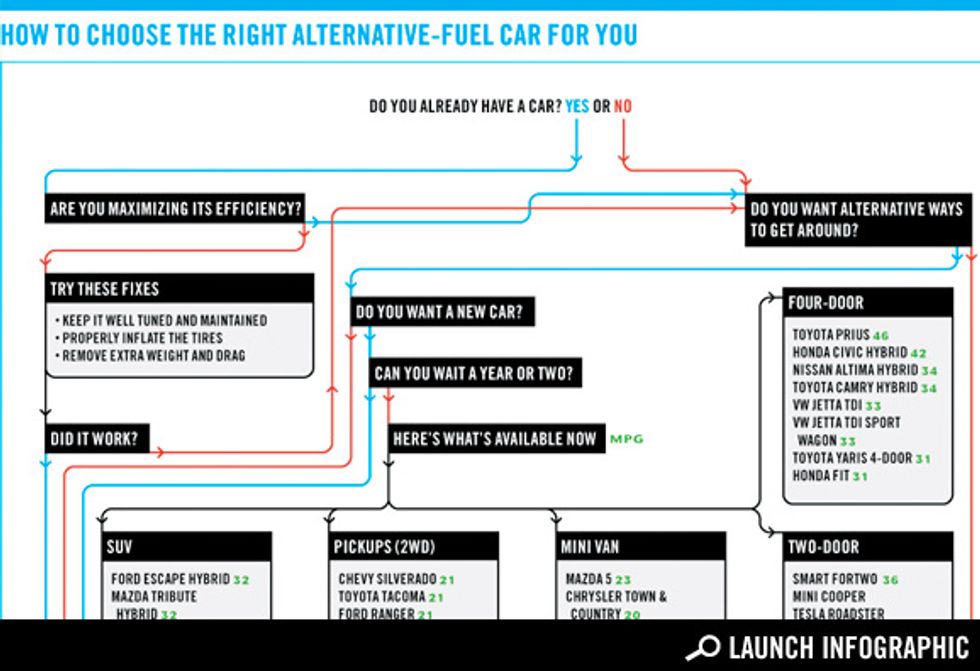 Click above to launch our handy flowchart, "How To Choose the Right Alternative-Fuel Car For You."

Whatever happened to hydrogen? The idea is great: Take the most abundant element in the universe, turn it silently into electricity, and the only byproduct is a wisp of steam. To its fans, the hydrogen fuel cell is a transportation miracle that will cork our carbon output and curb our addiction to foreign oil. To its critics, it's vaporware.

Fuel-cell cars are, in essence, electric cars. With the electricity it extracts from hydrogen, the onboard fuel cell charges a battery. The battery then powers an electric motor that turns the wheels. Critics argue that because "producing" hydrogen requires an energy source, typically natural gas, that unless the energy used is renewable, fuel cells are just running on fossil fuels.The other concern is that hydrogen cars may be a long-term solution at best-that it could take at least 40 years for a switch to make a marked impact on gas consumption and climate change. Quite simply, experts told Wired last year, we just don't have that kind of time. Still, many automakers continue to shake the pom-poms for fuel-cell vehicles, invoking images of a "hydrogen highway" dotted with filling stations (which would be, in truth, a new nationwide fueling infrastructure). VW is working on its; Honda has been quite aggressive with its FCX Clarity.Where fuel cells do pull their weight is in the home. In Japan, hundreds of houses already use them to generate power and heat. So don't be too surprised if, in five years, the fuel cell that gives you electricity and hot water also charges the electric car in your driveway.Are hybrid batteries toxic?If the forecasts are right, electrons will replace hydrocarbons as the energy source in our cars. Then, of course, we'll have to face the question of batteries. The batteries favored in hybrid cars-nickel-metal hydride-have an encouraging track record of lasting at least as long as the cars themselves. The lithium-ion batteries used in fully electric cars are similarly enduring. But how bad are they for the planet? Depends on what you do with them when they die.

According to the Blacksmith Institute, which studies pollution in the developing world, contamination from lead-battery recycling, mostly in developing countries, is one of the 10 worst global pollution problems. So while experts say that the batteries used in electric and hybrid cars are significantly less toxic than the lead-acid batteries found in conventional cars, the same rules apply: They must be properly disposed of and recycled.Meanwhile, Toyota alone sold 224,547 hybrids last year. If there isn't sufficient capacity to recycle these batteries, they could end up being shipped overseas to landfills, as is the case with many lead-acid batteries. Here's hoping we've learned enough from our (many) mistakes, and won't let it happen again.The amazing Indian Air Car: Coming to America?Perhaps you have heard that India's largest automaker, Tata Motors, has created the world's first commercial car that runs on air. The good news is that they're bringing it here. A few fun facts:It is powered by compressed air • Zero Pollution Motors will produce the American version • It's priced at $17,800 • Reservations in the States will be taken midyear; delivery is early 2010 • ZPM estimates that its Air Car will run up to 1,000 miles per fill-up, and at speeds up to 96 mph • It's up for the Automotive X Prize (see below), and is considered a front-runner • Made out of fiberglass instead of sheet metal, it's expected to be safer and easier to repair than a traditional car and rust-proof • It seats six.Who will build the best 100-mpg car? After staging a high-profile competition for civilian spaceflight in 2004, the X Prize Foundation now has another $10 million on the table, this time for a 100-mpg car. And after the checkered flag flies and the winning team claims the Progressive Automotive X Prize, there is "no reason you should not be driving a car that gets over 100 miles per gallon," according to the prize's creator, Peter Diamandis.

Next year's contest will be held in six cities, in a Tour de France–like race that will include aggressive start-up companies, weekend warriors, and at least one global automaker. After a car has proven it can touch at least 100 mpg (or its energy equivalent), teams have to show that their vehicle is safe, practical (with amenities like air conditioning and a stereo), and could be priced to sell at least 10,000 units per year.Candid corn: Is ethanol worth it?A parade of studies has tried to decipher the pros and cons of ethanol. Depending on a multitude of variables, some studies find it environmentally better than gasoline, some much worse. The implications aren't light: The USDA says that nearly a third of all U.S. corn used this year will go into ethanol production. And globally, food prices have been ratcheted up as more corn is brewed into fuel.A great deal of hope has been placed on cellulosic ethanol-a term that refers to an array of next-generation technologies. Cellulosic ethanol shows promise because it can be made from waste products-everything from orange peels to cow manure-or hearty plants like switchgrass that fare well in marginal soils. Most studies find cellulosic ethanol to yield a better energy ratio than the corn variety, but production costs are still prohibitively high.Biodiesel-a diesel substitute made from vegetable oil or animal fats-shows a better energy balance than corn ethanol. But even if projections are right, and the United States produces a billion gallons a year by 2012, biodiesel will still constitute a tiny fraction of our fuel diet.