Infographic: Who's Paying for the President?

Our third infographic in the "Capital in the Capitol" series is a startling comparison of the candidates' fundraising strategies in their race to the oval office, and a crucial reminder that the candidates don’t have to talk about money this election—the money talks for them. 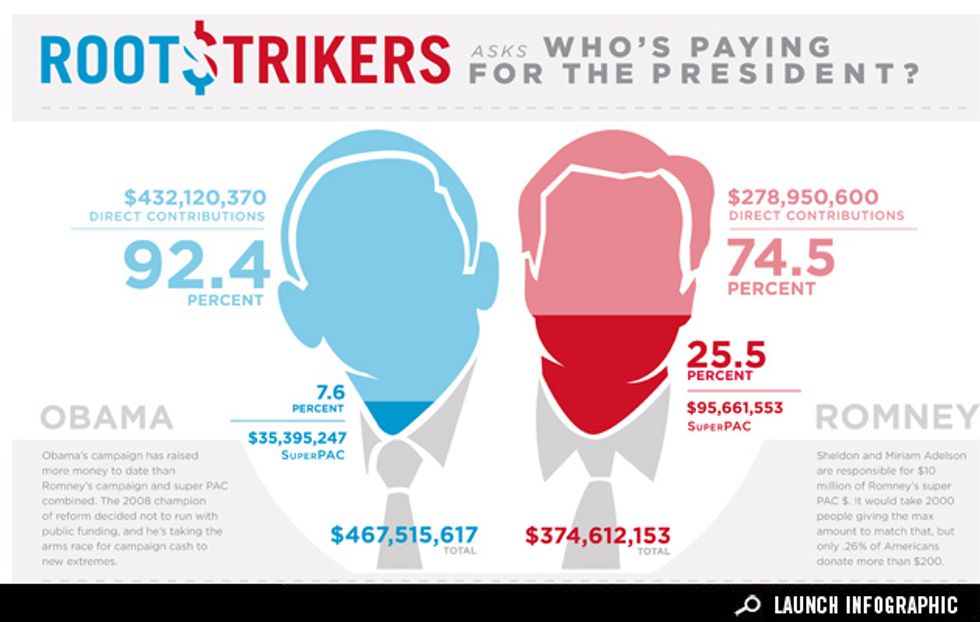 In the first presidential debate, President Obama relentlessly tried and failed to convince the audience that Mitt Romney's fiscal policies would only benefit wealthy individuals. He would have succeeded if he had made the point that Romney's super PAC has raised four times as much as his with the help of hedge fund managers and CEOs, or if he'd mentioned that the top five funders to Romney's campaign are all notorious big banks. Money speaks louder than rhetoric, especially to the 87 percent of Americans who think government corruption should be the next president's priority, but neither candidate brought it up.

So Rootstrikers decided to do it for them. Our third infographic in the "Capital in the Capitol" series is a startling comparison of the candidates' fundraising strategies in their race to the oval office, and a crucial reminder that the candidates don’t have to talk about money this election—the money talks for them.

Perhaps neither Barack Obama nor Mitt Romney want to speak out about our government’s crippling dependence on special interest cash because both of their campaigns hinge on it. Contrary to what some might suspect, Obama’s campaign has raised more money than Romney’s campaign. However, Romney’s super PAC has collected nearly four times as much money as Obama, whose primary source of election money is direct contributions.

While the candidates talk about their stand on various issues of domestic policy, their campaigns will tell a different story: As long as politicians need tons of money to run for office, they’ll be indebted to the few who can afford to give it to them. We all need to think about how these political "favors" influence the passage of laws that affect all of us as citizens.

We know who'spaying for the president. Do you?