A Short History Of Anti-Nazi Imagery In American Comics

This’ll help you get it out of your system. 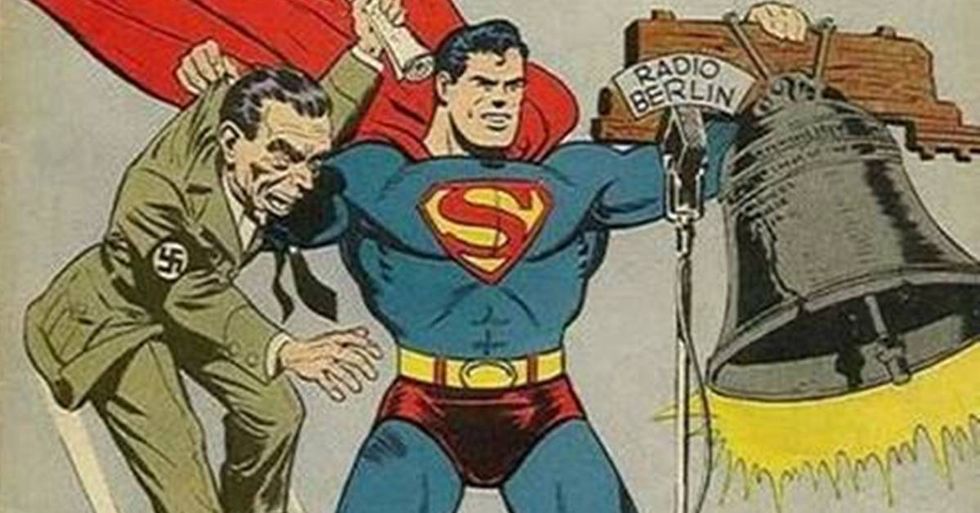 After white supremacist Richard Spencer was cold-cocked at Trump’s inauguration in January, there’s been an on-again, off-again debate on social media over whether it’s OK to punch a Nazi. Although ethicist Randy Cohen, the longtime author of “The Ethicist,” said that it is not OK to punch a Nazi unprovoked, he believes it is OK “to watch and delight in those videos of a neo-Nazi getting punched.”

During World War II, comic book artists had no problem drawing scenarios where superheroes got the chance to throw a left hook at Hitler or one of his Nazi goons. According to The Comics Journal’s Caleb Mozzocco, a large portion of early comic writers and artists were Jewish and used their books to warn isolationist Americans about Hitler. They also used the medium as a form of “wish fulfillment” or “revenge fantasy” against the anti-Semites.

The U.S. government also used comic books to publish anti-Nazi propaganda during the war. The Writer’s War Board was a volunteer group of writers who, through the Office of War Information, contacted publishers about putting anti-Nazi themes in their books. “Comic book companies were willing accomplices to the WWB,” Historian Paul Hirsch said. Plus, cooperating with the government was good for business. “Publishers had to comply with wartime rationing of wood pulp, the essential ingredient in comic book paper,” Hirsch said. “A publisher in good standing that printed WWB-sanctioned stories might receive access to additional wood pulp, and sell more comic books.”