Said Coach Mike ​Krzyzewski, ​”He won't play until I feel good about the entire situation and where he is at.” 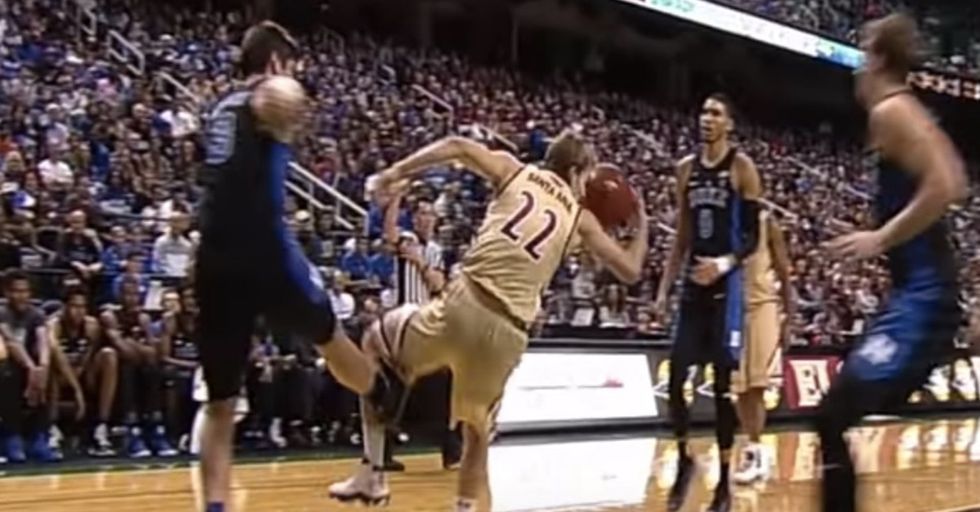 Duke has found its basketball program making headlines for all the wrong reasons after head coach Mike Krzyzewski announced that he would be suspending his starting guard due to a bizarre pattern of unsportsmanlike behavior. Grayson Allen will be sidelined for an indefinite period of time after he was caught on video intentionally tripping an opposing player when Duke played Elon last night.

The tripping incident against Steven Santa Ana was Allen’s third in the past year and enough that the team and Mike Krzyzewski specifically felt that a simple apology, as Allen had offered in the past, wasn’t enough this time.

The coach issued a statement to the media surrounding the strange turn of events, offering:

"We have had the opportunity to thoroughly review the incident involving Grayson Allen from last night's game against Elon. As I stated last night, the incident was unacceptable and inexcusable. He took an important step last night by apologizing in person to Steven Santa Ana and Coach Matt Matheny.

"As a program, we needed to take further steps regarding his actions that do not meet the standards of Duke Basketball. To that end, we have determined that Grayson will be suspended from competition for an indefinite amount of time."

Duke’s continued success on the court along with their outspoken fan base has made the team a popular villain in the landscape of college basketball. To that end, Allen’s actions aren’t doing the program any favors, but perhaps his suspension will show that the team is serious about sportsmanship. Many are now proclaiming Grayson Allen the most loathsome player in the history of a program that’s been rife with them:

Particularly troubling to many was Allen’s violent reaction on the bench following the foul:

"Seeing his reaction on the bench scared me. There's something bigger going on here." - Herm on Grayson Allen https://t.co/LtwgSHNw4U
— Golic and Wingo (@Golic and Wingo)1482412921.0

Speaking to the duration of the suspension, Krzyzewski was forthright in stating that he didn’t know how long it would take before he felt comfortable putting Allen back on the court. He said, "Maybe it's three [games]. Maybe it's two weeks. I don't know. He won't play until I feel good about the entire situation and where he is at. That's my responsibility as his coach and as a teacher of young men."

Allen’s averaged 20.6 points per game since last season, leading all players in major conferences, so while his absence will hinder the team’s performance on the court, letting him play under these circumstances would likely do even more harm to the program as a whole.