In Congo Dreaming Of The NBA 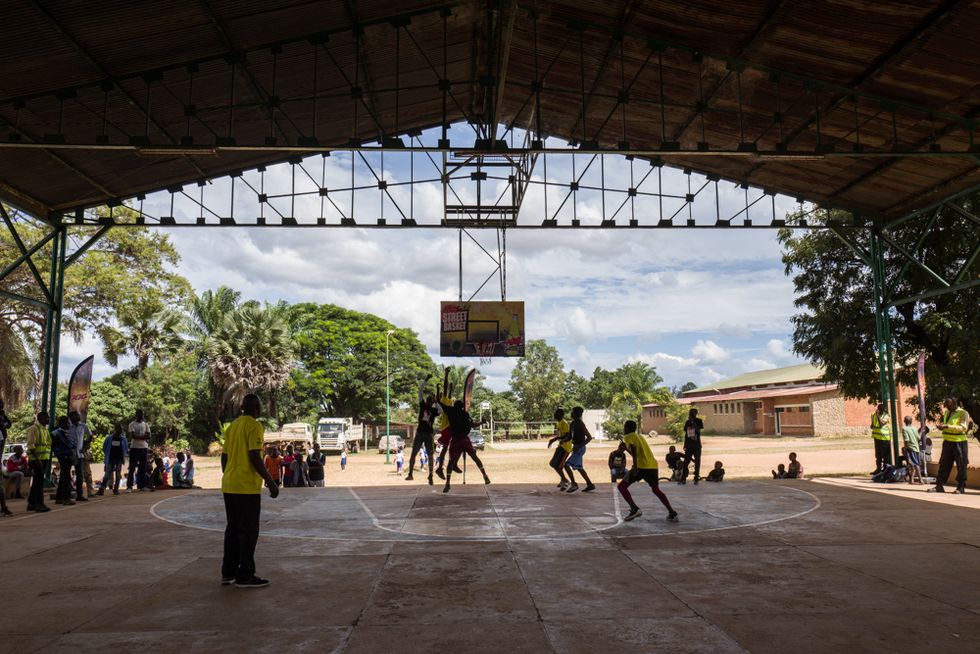 The crowd was amped and the music — a Notorious B.I.G. remix — pumped through the speakers. On the half court, six teenaged basketball players stopped to catch their breath before a referee blew the whistle and the ball was in play once again. Young people surrounded the court’s perimeter, all eyes on the action. A sponsor passed out neon yellow energy drinks.

18-year-old Ambroise Ngandu watched the game from the sidelines. His team had already played in this weekly basketball tournament on the outskirts of Lubumbashi, a city in the far southeastern extension of the Democratic Republic of Congo. Now was not the time to relax: Ambroise was here to scout out his competition.

Lubumbashi is the center of DRC’s mining industry, as well as political opposition to Congolese President Joseph Kabila. But it’s also the home city of the Orlando Magic’s Bismack Biyombo, who, along with Emmanuel Mudiay, is one of two current players NBA players from DRC. (Serge Ibaka is from next door — the Republic of Congo.)

Biyombo made a point of giving back to his hometown and his country almost as soon as he was drafted to the NBA in 2011. The best players from this weekly “street basketball” tournament are chosen to participate in a summer camp Biyombo hosts each July in Lubumbashi. The two best players from the summer camp travel to the U.S. for high school, where they’ll also play basketball.

All photos by Lena Mucha.

“Biyombo is my idol,” said Ngandu matter-of-factly. He’s been playing basketball for four years as a power forward and participated in Biyombo’s summer camp twice. He said that having a hometown guy in the NBA makes him “work hard so I can go to the NBA too.”

“Even as a lady, I want to be like Biyombo,” said Helen Mwande, 17, who stood on the sidelines near Ngandu. The most talented girls get to go to the summer camp, though there isn’t a program for them to travel to the U.S. — yet.

The idea to bring DRC’s promising basketball players to the U.S. was born out of Biyombo’s own challenges, explained Biyombo’s father, Francois Biyombo.

“Bismack suffered before he reached the level of the NBA,” Francois said from the Lubumbashi office of Génération Déterminée, the charity organization he and his son established. “So we started thinking about what we can do to help younger people have an easier time in their path to professional basketball.”

Sports success as a means to overcoming endemic poverty is a common tale the world over, and there is an increasing number of professional basketball players in the U.S. from sub-Saharan African nations.

But Biyombo’s journey to the NBA was particularly meandering. Like many athletes, it involved a good deal of risk-taking and good fortune mixed with sheer talent. Unlike many, it involved crossing continents alone as a teenager.

Biyombo had shown promise as a young basketball player on a local team in Lubumbashi. His father, who fashioned a hoop out of a small trash bin for his son to practice at home, saw that basketball could be a means to a better life. The family — with Biyombo and his six siblings — lived a lower-middle-class lifestyle in Lubumbashi, but DRC was struggling after years of conflict and upward social mobility was a path steeped in corruption.

At 16, Biyombo set off alone for Tanzania with the plan that he would fly from its capital, Dar es Salaam, to the rich Arabian Gulf nation of Qatar and play for a team there.

“His mother didn’t want to see him go, but Bismack and I were looking into the same direction,” Francois explained. “He said to me, ‘Dad, one day I’m going to play in the NBA.’”

Only, there was a hitch in his plan: When Biyombo showed up in Dar Es Salaam, he couldn’t obtain a visa to Qatar. However, he could travel to Yemen (by far the poorest country in the Arabian Peninsula and one embroiled in its own history of conflict) and from there hope to make it to one of Yemen’s rich neighbors.

And so on a strand of hope, Biyombo left Africa.

He traveled to Yemen in 2008, but never got a Qatari visa. He still needed to survive, however, so he began playing basketball for a local team in the fledgling Yemeni league. That could have spelled disaster, but Biyombo was discovered by a Portuguese coach during an international tournament in Jordan who recruited Biyombo to play basketball for a Spanish league.

“He saw Bismack playing and saw that he had potential so invited him to Spain,” Francois said speaking with guarded pride of his son’s accomplishments.

In 2011, Biyombo was invited to Portland, Oregon, for the Nike Hoop Summit, which brings talented international teens to play against rising stars in the U.S. There, he played extraordinarily well in front of NBA scouts and went on to become the seventh NBA draft pick that year, after which, “there was a big party in Lubumbashi,” Francois said.

Biyombo could have been thwarted at many steps in his journey, so he’s trying to provide an opportunity for young Congolese people that eliminates the role of chance and fosters talent where it exists. He hosts summer camps in other cities across DRC as well.

For the vast majority of young Congolese basketball players, however, Biyombo’s success will be an inspiration for their lives instead of a life-changing golden ticket to the U.S. Still, that a hometown boy made it to the NBA at all fosters a certain pride in Lubumbashi. “Up until today, I watch TV and I see Biyombo playing and I say ‘thank you God for letting someone from here have this success,’” basketball coach Bunduki bin Bunduki said after the street basketball tournament ended.

Regardless, Biyombo faces an uphill battle in his efforts to promote basketball in his home country, said Charles Ngumbi, coach of a Lubumbashi basketball team. Sports are underfunded, and soccer receives the vast majority of what little support exists.

“When I first came to Lubumbashi in 1994, I could find 20 local basketball teams, and now there are just seven for boys and four for girls,” he lamented. Ngumbi said that in 2016, one of the teams he coaches qualified for a regional competition in DRC’s capital, Kinshasa, but there was no money for them to travel there to participate, so they had to stay home.

Biyombo may be trying to find an alternative route for future Congolese basketball starts, but the lack of infrastructure is limiting. When NBA star Dikembe Mutombo established a charity in his home country, DRC, he focused his giving on hospitals and serving the health needs of the Congolese people.

“It will be very difficult for Biyombo to do what he wants to do with basketball in DRC,” Ngumbi said while we sat outside his modest home. “Maybe if we have five or six Biyombos, basketball will revive here.”

Some Congolese would be happy to see that revival. After the weekend’s street basketball tournament, I stopped by a public basketball court in central Lubumbashi. On one side of the court, a pickup game was underway, most of the players running in flip-flops. On the other side, goats roamed and children rolled a tire across the free throw line. When the young men who were playing basketball took short breaks to speak with me, all of them had a similar point to express.

“Every Congolese who plays basketball wants to be like Biyombo,” said Yanick Chungu.

“He is our brother!” declared Marc Sam.

Sitting on the sidelines of the court was the visibly younger Eli, 15. “I don’t play so well,” he told me shyly and stared out at the guys on the court playing what had turned into a game of Around the World.

“I heard football is more popular here,” I said to him.

I asked him who his favorite player was. He scoffed at me and then grinned. As if I even had to ask.