The son of a football coach and former quarterback describes his devotion as “faith, family, and football.” 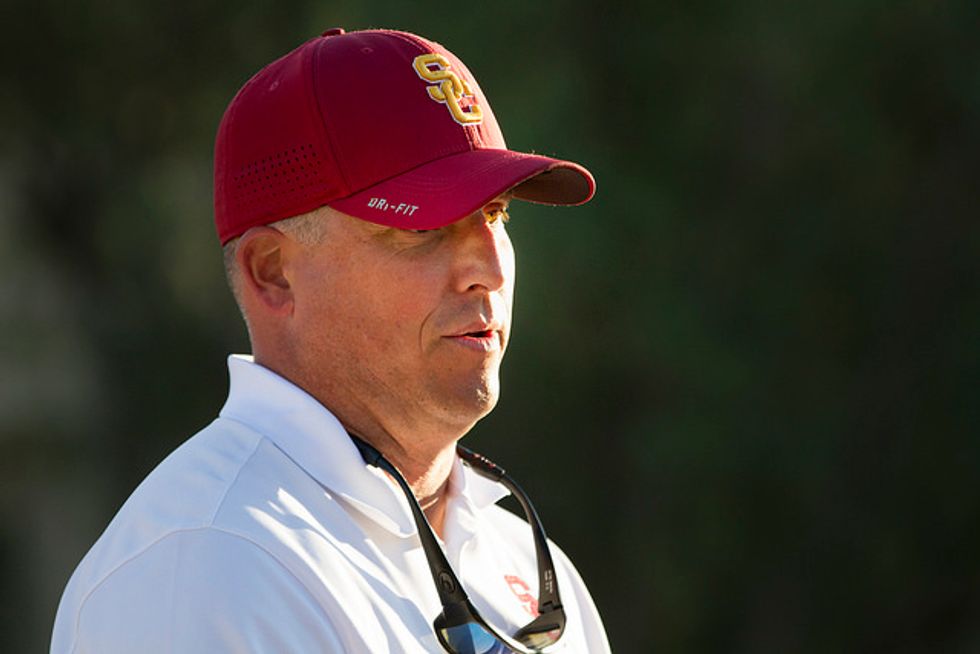 It didn’t take long for Clay Helton to make his mark as the University of Southern California’s head football coach. The 45-year-old son of a football coach and former quarterback describes his devotion as “faith, family, and football” — and it shows. After six years at USC, he has revived the tradition of coaching players with integrity, honesty, and strength.

In his first full season as head coach last year, USC went on a nine-game winning streak (its longest since 2008-09) to rise to a final No. 3 national AP ranking and earning a berth in the Rose Bowl, where the team capped the season with a thrilling 52-49 at-the-gun victory over No. 5 Penn State.

With a 4-0 start to the 2017-18 season, the Trojans racked up 13 consecutive victories until the team suffered a heartbreaking 30-27 loss to No. 16 Washington State in week five. But Helton is no stranger to fighting back — or as USC says, “fighting on.” He previously stepped up to lead the team as an interim head coach twice, after one interim head coach quit in 2013 and another was fired for misconduct in 2015. He was officially named the head coach in November 2015.

“Choosing a coach is an inexact science,” said then-USC athletic director Pat Haden upon announcing Helton’s hiring. “In Clay’s case, there is exactness. We have a man with unquestioned integrity… Clay is a leader of young men.”

Helton joined the USC staff in February 2010 as the quarterbacks’ coach after spending 10 seasons as an assistant at Memphis. He added the passing game coordinator role in 2012 and became the offensive coordinator in 2013.

With a total of 104 men on USC’s roster, Helton has his work cut out for him. But he’s excited about the potential of this year’s Trojan squad. It’s led by the poised-beyond-his-years Sam Darnold at quarterback, known for his quick release, accuracy, mobility and level-headed play. He’s a leading Heisman Trophy contender in 2017 after earning national accolades in his 2016 rookie showing.

GOOD caught up with Helton to learn how he’ll lead the way to the next win.

How do you instill integrity in your players on and off the field?

I think the best way is by example. As a leader, you have to gain the trust of your players, and there are four things that you do to instill that trust. The first and most important is they have to trust your character as a leader. Then, they have to know that you’re knowledgeable enough to help them develop. The third is that they understand that you genuinely care about them. The last one — and the hardest one sometimes for coaches — is that you have to be brutally honest with them because that’s what they respect. Give them their strengths, but also identify where their areas of growth are. That’s what they respect the most.

How would you describe your coaching style?

I love the game. I’m a coach’s son, and I love the attention to detail with the game. I love to coach guys really hard, but also to let them know I really love them like a member of my family. One of the things I learned from my dad [Kim Helton], who was a coach for over 40 years, was to understand that when we’re on the field, we coach as hard as we can, but to not be afraid when you’re coming off the field to put your arm around their neck and tell them you love them and talk about other things besides the X’s and O’s of the game. Talk about what’s going on in their life and show them you genuinely care.

What makes this team particularly special?

Just having been with a lot of these guys for several years and watching them grow up and see what they’ve become. They’ve become a first-class bunch that really believes in the team over self. That’s what stands out the most. They are so much more worried about team success rather than their individual success, and that’s what I see on a day-to-day basis from them.

What does the USC mantra “Fight On” mean to you as a coach?