Islamophobe On Tumblr Gets Completely Owned

‘Yes, lets imagine a world WITHOUT MUSLIMS, shall we?’ 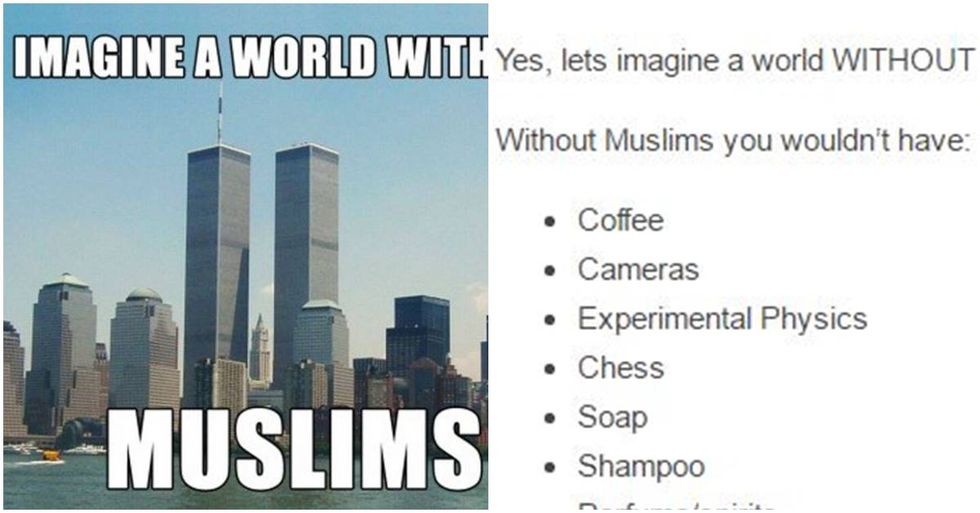 Recent terrorist attacks in France, Turkey, and the U.S. have stoked the flames of Islamophobia throughout the West. And nowhere was it been more apparent than last night at the Republican National Convention when former Speaker of the House Newt Gingrich went on an anti-Muslim rant where he claimed there were 16 million ISIS supporters in Pakistan. With fiery racist rhetoric coming out of a major political party, it’s not shocking that Islamophobes are becoming more comfortable spreading their hate in public.

Recently, a Tumblr user asked other users to “Imagine a world without Muslims” by posting the photo above. But what the user didn’t realize was that by blaming the actions of a few extremists on a population over 1.5 billion people he was setting himself up to get completely owned. Tumblr user whatpath responded to the racist meme with the most amazing list of Muslim achievements throughout history.

Yes, lets imagine a world WITHOUT MUSLIMS, shall we?

Without Muslims you wouldn’t have:

Gardens used for beauty and meditation instead of for herbs and kitchen.

Manufacturing of paper and cloth

It was a Muslim who realized that light ENTERS our eyes, unlike the Greeks who thought we EMITTED rays, and so invented a camera from this discovery.

It was a Muslim who first tried to FLY in 852, even though it is the Wright Brothers who have taken the credit.

It was a Muslim by the name of Jabir ibn Hayyan who was known as the founder of modern Chemistry. He transformed alchemy into chemistry. He invented: distillation, purification, oxidation, evaporation, and filtration. He also discovered sulfuric and nitric acid.

It is a Muslim, by the name of Al-Jazari who is known as the father of robotics.

It was a Muslim who was the architect for Henry V’s castle.

It was a Muslim who invented hollow needles to suck cataracts from eyes, a technique still used today.

It was a Muslim who actually discovered inoculation, not Jenner and Pasteur to treat cowpox. The West just brought it over from Turkey

It was Muslims who contributed much to mathematics like Algebra and Trigonometry, which was imported over to Europe 300 years later to Fibonnaci and the rest.

It was Muslims who discovered that the Earth was round 500 years before Galileo did.

Just imagine a world without Muslims. Now I think you probably meant, JUST IMAGINE A WORLD WITHOUT TERRORISTS. And then I would agree, the world would definitely be a better place without those pieces of filth. But to hold a whole group responsible for the actions of a few is ignorant and racist. No one would ever expect Christians or White people to be held responsible for the acts of Timothy McVeigh (Oklahoma bombing) or Anders Breivik (Norway killing), or the gun man that shot Congresswoman Giffords in head, wounded 12 and killed 6 people, and rightly so because they had nothing to do with those incidents! Just like the rest of the 1.5 billion Muslims have nothing to do with this incident!