Is the Beer You’re Drinking Problematic?

It doesn’t have to be that way. 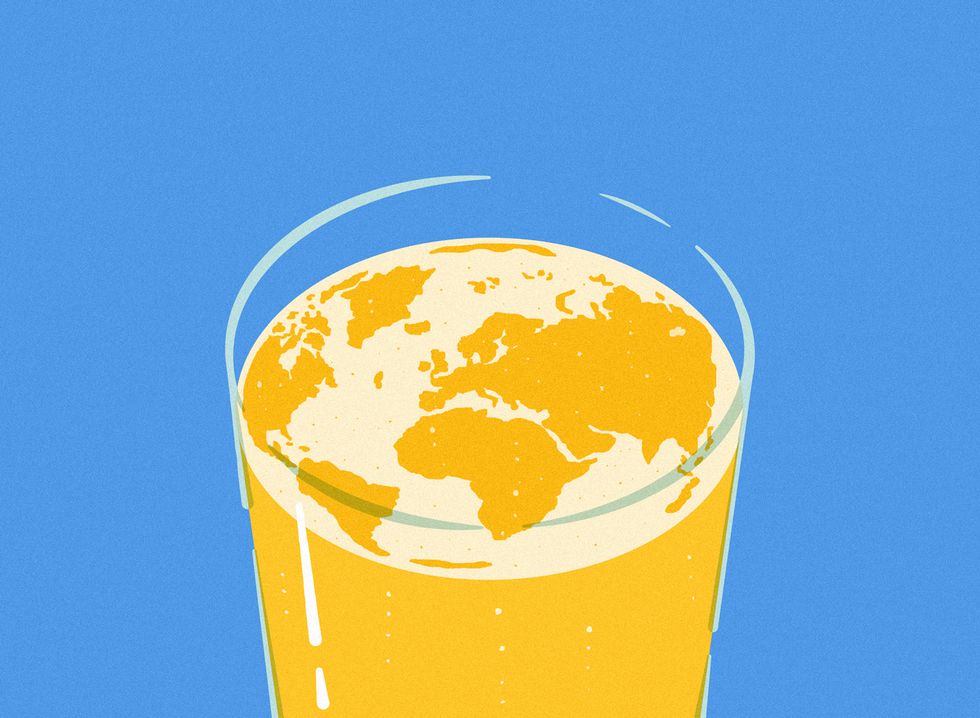 Mike Babb was born in Golden, Colorado, in the shadow of the monolithic Coors Brewing Company. He worked at Coors for 20 years, the third generation of his family to do so. During what he calls a sabbatical, he went to Weihenstephan, part of the Technical University of Munich in Germany, where he learned the craft of a master brewer. After teaching at the Siebel Institute, a prestigious brewing program in Chicago, Babb relocated to Michigan. He helped design a new joint higher education degree program at the Kalamazoo Valley Community College and Western Michigan University that’s set to kick off later this year: a four-year Bachelor’s degree in sustainable brewing. The first 30 credit hours at KVCC will give the students a brewing certificate, with hands on classes in an experimental brewing kitchen, along with an associate’s degree that they can transfer to WMU for a more rigorous scientific focus in the second two years.

“We’re going to try, at the onset, to educate brewers about sustainability, the costs involved for brewing, the impact to the environment, and the types of issues they need to be concerned about,” Babb tells me.

The emphasis on sustainable brewing showcased in the joint program at KVCC and MCU is not new, but it’s picking up steam. If you haven’t heard of the Brewer’s Climate Declaration, you’ve probably tasted the product of companies who’ve signed on. A few dozen of the biggest craft microbreweries in the country, like Sierra Nevada and New Belgium, have added their name to this subset of Ceres’ popular climate declaration, a “call to action from leading American businesses and individuals.” The declaration signers want to pressure policy makers to act on climate change.

It’s also certainly no coincidence that Babb’s new program and the declaration (which began in March) are arriving at the apex of a craft-brewing renaissance; in 2014, craft beer continued to eat up more of the beer market, with many in the industry hoping to claim 20 percent of total market share by 2020. The number of small breweries also ballooned, with nearly 3,500 breweries serving pints around the country. There’s growing momentum by craft brewers to cut down on their direct and indirect carbon emissions, and think about their environmental impact. According to an analysis by the Guardian, the more local your beer, the better it is for the environment.

“In terms of craft brewers, they need to look at sustainability not just in terms of cost, but in terms of design and thinking about these things at the onset, at how they will be impacting the environment,” Babb tells me. “Local produced beers, if they are brewpub, for example, they have no packaging materials.”

Steven Bertman, a professor of chemistry at Western Michigan University who’ll be part of the new brewing program, sees sustainability as a growing cultural fixture of craft brewing. “It’s just my sense from talking to these brewers that a lot of the people who are in the craft beer industry are naturally inclined to be more interested in environmental issues. It’s not frat boys who’re saying ‘we want this Budweiser to be more sustainable!’”

The new program aims to build on the natural momentum of this craft brew spirit, assuring that the next generation of brewers at both small and large companies will come into the industry with these values baked into their practices. It will also allow new beer makers to learn the lessons bigger corporations are picking up as they try to apply the consumer-demanded ethos of sustainability on a broad scale. The degree itself is a “two and two” program: students will spend two years learning different brewing styles, food pairing, safety issues, quality control issues, and legal issues, and two learning about life cycle analyses and systems.

Babb describes how processes that reuse energy and minimize wastewater can positively affect the quality of beer. The component parts required to make a good beer are relatively simple: heating and cooling water, grains, hops, and yeast. We know that climate change is affecting hops yield and may impact barley production. And in breweries, the biggest user of energy is the wort-boiling, brew kettle section of the beer-making process. The kettle available to students in the program uses half of the energy of comparable brew kettles, a tool Babb says is more popular in Europe, where energy costs are significantly higher than the U.S., but one that’s gaining ground with increasing awareness about sustainable practices.

“[Students will be] able to operate a brew kettle where the vapors are condensed and recovered, and actually that heat is reused in other parts of the process,” Babb says. “When you do that, you significantly drop the energy requirement.”

And it’s not just energy use. The beer making process can be incredibly wasteful, both in its use of water, and how its byproducts are managed.

“So many of these smaller breweries only use cleaning chemicals once,” Babb tells me. The program has a cleaning system that will reuse the chemicals, known as cleaning in place, or CIP, rather than sending the chemicals to the sewer after one shot. Students will learn how the byproducts of the brewing process—the spent grains and spent yeast—can be utilized in other ways. If done properly, spent grains can be composted to cultivate very rich soil, while the spent yeast will be sent to the culinary school to enrich flavors and sauces and gravies and soups. “There’s a progression of very simple things that can be done to cut down on waste, and then there are some things that are a little bit more involved.”

The types of environmental values like energy efficiency, water reuse, and proper wastewater disposal Babb and Bertman will be teaching in the program weren’t always foundational in the beer industry. Multinational beer corporations—acting not unlike corporate entities in other sectors—ran amok thirty years ago. In the 1980s and early ‘90s, Coors was fined a number of times by the EPA. They dumped millions of gallons of liquid toxic waste containing flammable solvents, lead dross, and cyanide solutions in landfills. They failed to report contaminated drinking water, and local officials discovered that just downstream of the company, babies were born with double the national average of low birthweight and childhood cancer. Even as recently as 2001, they spilled 77,000 gallons of beer in Clear Creek, killing over 50,000 fish across seven-and-a-half miles.

Now, some of these multinational breweries appear to be turning over a new leaf. MillerCoors has upped its water-to-beer ratio, reduced the waste it sends out of its brewing facilities, and increased energy efficiency. Anheuser-Busch InBev claims to have the best water-to-beer ratio in the world, even as they produce one out of every four beers. The reasons for the changes are complicated, but part of the corporate pivot may be a response to the popularity of the local, craft brew craze. Some of the most beloved craft companies are incredibly vocal about their environmental stewardship, an enthusiasm with the power to shift markets and catch the attention of the macro breweries. Trying to connect with consumers, some of the multinationals are even buying up craft companies, or making “crafty” beers, wolves in sheep’s clothing that have all the appeal of a microbrew, with none of the inherent values or authenticity. Either way, companies both large and small will be looking for creative new brewers with a sense of the sustainability movement and a skill for minimizing waste.

Babb and Bertman hope that the program in Kalamazoo will produce that new generation of brewers. As craft beer has grown in stature, so have educational opportunities to get a degree in beer-making, and learn from masters like Babb, who have experience in both industry and craft. The big difference in Michigan is the emphasis on sustainability, the first program of its kind in the country. And it’s not just the brewers either; young people in general expect more from the products they consume. The program is poised to have a long-term effect on the industry as a whole, as the benefits of better beer continue to trickle down to brew aficionados who want more of a connection with the stuff they kick back.

“To me, it’s a win-win thing,” Babb says. “I think this movement is really something important with the millennials, because they are hungry for having an identity with where their food comes from, where they beer comes from. I like that.”