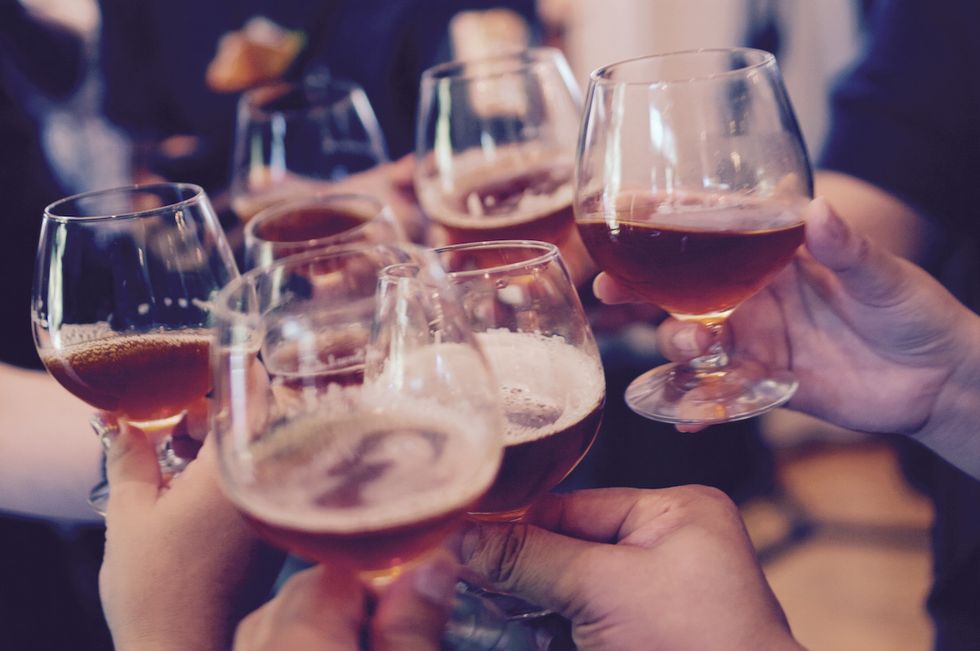 While women are rarely the targets in beer advertising as consumers—they’re more likely to be sexualized objects serving pints of it—it turns out they are actually the ones driving some of today’s top-selling beer trends.

Men account for about two-thirds of overall beer consumption in the United States, however, among a group of six top-trending craft varieties, women dominate. Let’s just call it a case of quality over quantity.

Beer and Spice, and Everything Nice

The fastest growing styles of beer in America are herbal and spiced brews. If you’re thinking what I’m thinking (“Like, the Pumpkin Spice Latte of beer?”)—the answer is yes. Ales made with pumpkin, rosemary, coriander—heck, even the spirit of Christmas—are represented in these craft beers.

New batches of hard root beer and hard soda earned more than $250 million in the past year, and the survey data shows that female-run households are 55 percent more likely to try new flavors. According to Nielsen, spiced and herbal beers have generated annual sales growth of 375 percent, a small-but-skyrocketing category of craft beer.

You know what they say: When life gives you lactobacillus, make Gose. Sour flavors, rather than mild or sweet, push the gap even further between gendered preferences in the beer world. Goses (Sours) and American wild ales show the highest female-to-male index, with women favoring the tart, acidic, lip-puckering beers 75 percent more than men.

Other categories scored high in the survey: fruit beers, shandies, and saisons rank among those brews women are ordering and toasting to en masse, but it’s not likely you’ll find many beers ads courting their consumption. According to a recent New York Times article on beer ads and their portrayal of women, big name beer companies like Anheuser-Busch and MillerCoors have been slow to target women with gender-neutral and female-empowering ads.

“It was fine to show a frat party making fun of girls five or eight years ago,” brand consultant Allen Adamson tells The New York Times. “But it’s ineffective and potentially damaging to do today.”

For too long, beer marketing has relied on hyper-masculine tropes that disregard women at best, or objectify them at worst. Thankfully, those ads are a dying breed.

“The thought of being fully inclusive to women, when you speak to Millennials, they’re like, ‘Yeah, duh,’ ” David Kroll, chief marketing officer at MillerCoors, tells The Times. “In some respects, beer is just catching up to the Millennial mind-set.”

It isn’t just ads like Bud Light’s that fail to represent and empower women as beer lovers; according to the Brewers Association, the craft beer world isn’t doing much better. Despite the prominent role of women in leading the trend of intricate flavor profiles and more nuanced craft beers (versus the superfluous hoppy IPAs—which this writer still loves), they haven’t been included in the narrative as drinkers. They’re blurred into the background while men remain the focus, the presumed default consumer.

Why is this happening?

Women aren’t just more adventurous craft beer lovers. Since the dawn of time, women have been hailed as more gifted tasters, and now there is science to back it up. According to NPR, women, perhaps because of an evolutionary predisposition to a heightened sense of smell, are often more sensitive to taste and aroma.

The reason may have started out as a way for them to identify their young in the wild. In one study where men and women were trained to have a heightened sense of smell, women of reproductive age could detect odors that had been reduced by 11 orders of magnitude.

NPR found, in a study of 4,000 people, 34 percent of women were deemed supertasters, compared to only 22 percent of men. Maybe she’s born with it, maybe it’s training, but a woman’s sense of smell and taste is an observably stronger power; in fact, some call it super.

Despite the female upper hand when it comes to identifying more subtle flavor profiles, the craft beer, wine, and culinary worlds are still male dominated. The reality is that women are nearly invisible in the kitchen, brewery, and wine cellar: Women represent only 6.3 percent of head chefs, less than 14 percent of master sommeliers (just 32 women out of the world’s 229 master somms), and 21 percent of top positions in craft breweries. Groups like Beer Drinking Society of Ladies, the Pink Boots Society, and Barley’s Angels are working to change those dismal numbers, by bringing together women who brew and drink beer. They also work to modernize the perception of women in beer, and to push for their inclusion in traditionally male-dominated industries.

“It is important that beer be as accessible to women as it is the good-ole-boys that seem to dominate the beer scene in most places,” says Christine Jump, Director of Barley’s Angels. “For that to happen, women need to become recognized as legitimate customers.”

Where My Ladies (Drinking Beer) At?

It isn't just through gender that we see trends and diversity in taste. According to Nielsen, age and location can be important, and surprising, factors. Adults in their mid-thirties and forties tend to be the most adventurous drinkers, followed by 44-54 year olds. And regional differences reveal interesting trends: Midwesterners, known more for their meat and potatoes than their daring taste, have the widest range of style preferences among craft beer drinkers. The West coast ranks second place in variety, followed by the Northeast (just barely beating out the South for third).

So next time you saddle up to a bar, scan the crowd for a fellow female in her thirties, ideally from the Midwest. Sample a flight of beer with her—She'll likely know a thing or two more about what to look for in a drink and why.