Trump chafes against anyone or anything that challenges his power, including empirical reality 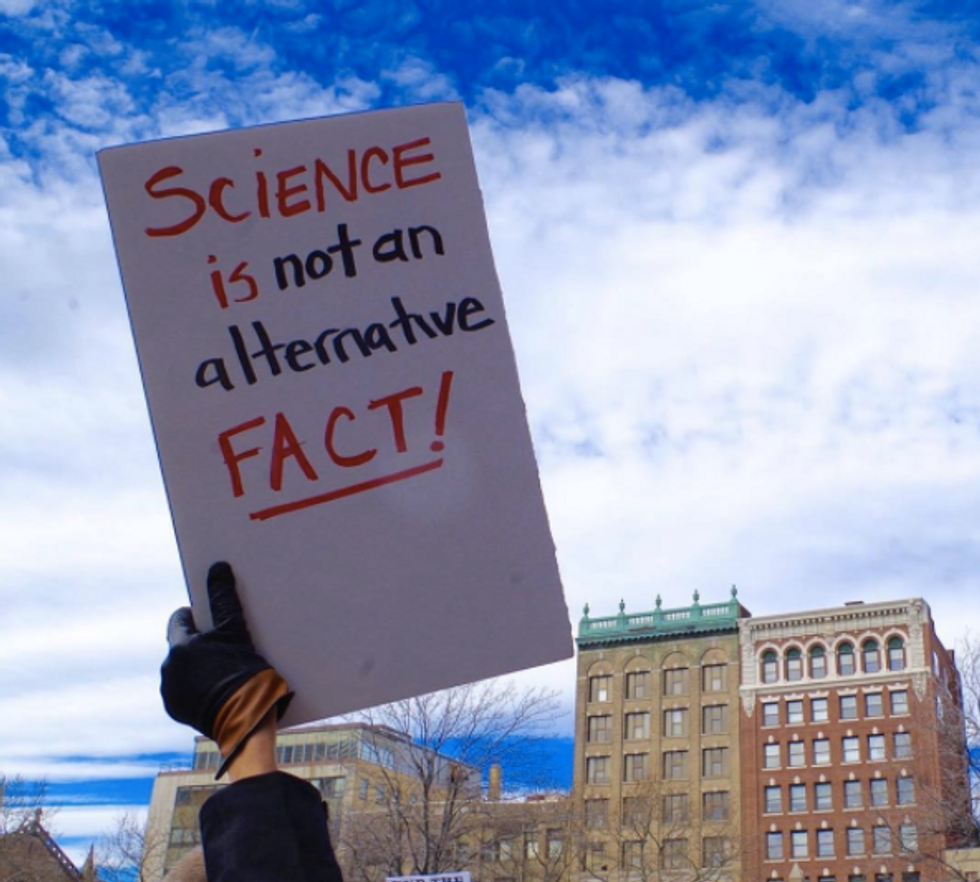 One of the most unexpected political developments in recent months has been the political awakening of scientists in the United States.

A normally reticent group (at least when it comes to politics), scientists are speaking out, organizing a major march, and planning to run for public office. There is a growing sense that the danger posed by the Trump administration to evidence-based policy—and perhaps science itself—is unprecedented. I share this concern. The Trump administration’s actions and rhetoric appear to signal an acceleration of Republican skepticism toward scientific research carried out in the public interest.

This said, what is keeping political scientists, particularly those like me who study political psychology, up at night is not the Trump administration’s ideologically driven science bias. Rather, it is the fact that Trump himself exhibits an authoritarian style of motivated reasoning that appears to be intended (consciously or not) to consolidate his power.

This combination—institutional challenges to the scientific integrity of government employees and Trump’s willingness to disregard evidence on a variety of matters—has broad and ominous implications beyond how science informs national policies.

Politically motivated skepticism of science is certainly not new. As I have argued elsewhere, science is consistently a political target precisely because of its political power.

Science has “epistemic authority,” meaning it is the best method humans have available to understand what is true about the world. For this reason, policy decisions are expected to be based in large part on scientific conclusions. And as the size and scope of the federal government has increased, so has the use of scientific research in government decision-making, making it an even bigger target.

A number of actions taken so far by the Trump administration seem to portend hostility to government-sponsored science and science-backed policy. Many were alarmed by orders during the administration’s first week in office that government agencies cease all communications with the public.

But likely more indicative of the administration’s attitude toward government-sponsored research are Trump’s nominees to head Cabinet-level agencies. These individuals have less relevant expertise than previous administrations, and Trump’s Cabinet is the first in recent memory to include no one with a Ph.D. The nominee to head the Environmental Protection Agency, Scott Pruitt, has questioned well-accepted climate science and has worked closely with energy companies to undermine the agency he is to head.

In addition, Trump’s choice for Office of Management & Budget director, Mick Mulvaney, has taken a similar tack with respect to government-sponsored science aimed at protecting the public’s health. The two scientists said to be under consideration for science advisor both happen to be far outside the mainstream on climate science (neither is a climate scientist).

It is important to recognize that scientific evidence is not the only legitimate consideration underlying a policy decision. There may be larger ideological commitments at stake or constituents to please or (less justifiably) more strategic political considerations.

Such bending of science comes in a variety of forms: cherry-picking studies and experts that support your perspective; harassing government-sponsored scientists (via cuts in funding or investigations) whose conclusions weigh against policies you prefer; forcing government scientists to change the language of reports for political reasons.

Science bias in and of itself is not conservative or liberal, and one can find it on both sides of the political spectrum. However, if we are to avoid false equivalence, we must admit that most of the anti-science bias coming from politicians in recent decades has been from the Republican Party. This bias has been documented extensively. (One can also check out the two parties’ 2016 party platforms.)

There is a straightforward reason for this partisan difference: Much contemporary government-sponsored research is in service of a growing regulatory state. Republicans tend to oppose federal government regulation because of their longstanding representation of business interests and commitment to states’ rights. In recent decades, the Republican Party also has become the political home to religious conservatives, many of whom distrust science because it challenges biblical authority, particularly with respect to evolution.

The George W. Bush administration was arguably the heyday for ideologically driven interference in government-produced science, something well-documented in two reports by the Union of Concerned Scientists. In response to this, the Obama administration put in place various institutional safeguards to protect the integrity of science, and Congress strengthened its protection of federal whistleblowers.

But Trump’s rhetoric and actions—both before and after assuming the presidency—seem to foreshadow a return to Bush-era tactics. Trump’s Cabinet choices exhibit an unusual fixation on deregulation, particularly in the arena of energy and the environment. And both Trump and his powerful vice president have a history of making statements that are ignorant and mistrustful of science.

Danger in the rhetoric

Unfortunately, there is reason to suspect that Trump’s disdain for scientific research is not only driven by political ideology and the interests he represents. Trump clearly chafes against anyone or anything that challenges his power, including empirical reality.

Trump’s constant efforts to aggrandize himself are plain to see. In the past, Donald Trump lied about everything from the size of his home to his donations to charity. In service of whipping up a crowd, Trump has been willing to scapegoat entire minority groups and falsely question a president’s citizenship.

So far, President Trump has focused mainly on crowd sizes, poll numbers and the merits of comedians’ performances. Many Americans are tempted to not take these distortions of seemingly trivial topics seriously. But this is authoritarian rhetoric.

As with all presidents, Trump will eventually face data that reflect poorly on some aspects of his job performance: for example, pollution levels, disease rates, disappointing jobs figures, etc. He has been so consistent in his dissembling to protect his reputation that it would be surprising if this behavior did not continue in the face of more serious threats. Scholars are already speculating that Trump may employ Nixonian efforts to doctor official government statistics or discourage critical scholarly study of society under his administration by eliminating National Science Foundation social and economic science funding.

Between his executive power and the power of the bully pulpit, President Trump has considerable ability to harm the scientific enterprise and, quite possibly, democratic institutions as well. This is a time, in my view, for scientists, and experts more generally, to mobilize. As Jack Goldsmith of Harvard Law School argues, experts play a critical role at moments like this as a “synopticon” – a large collective closely monitoring the actions of our political leaders.