A Walk Along England’s Curry Row

We got a slice of the spice houses of Northeast England 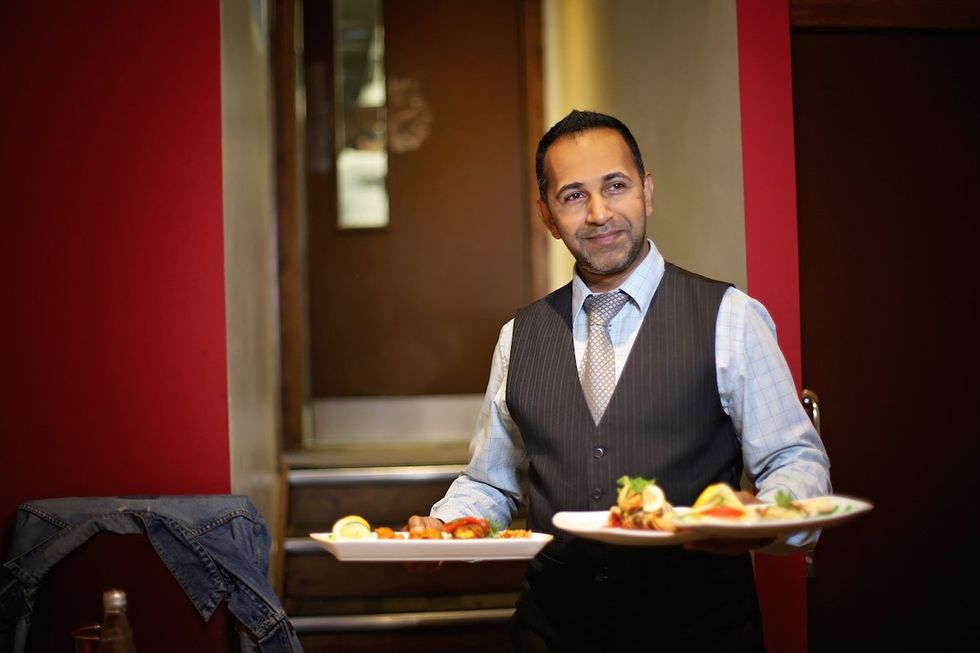 The young waiter, in a purple button-up and matching tie, stood over our table at Tandoori International listing off the specials in the typical thick South Shields “Geordie” accent, as the vernacular of the northeast is known.

I asked how to spell the dish that I’d decided on, in order to keep notes on the meal.

South Shields is perched on the North Sea coastline of England, but is typically overlooked by tourists in favor of the neighboring cities of Newcastle and Sunderland. But what the tourists are missing is a stretch of 17 Indian restaurants—or as the locals call them, curry houses—along a three-block section of Ocean Road. The owners and managers, chefs and servers are all from Bangladesh, a small country with a big population on the eastern border of India. Though Bangladesh gained independence from India in 1947 and again from Pakistan in 1971, its roots are historically enmeshed in Indian culture.

It’s widely accepted that the Star of India and Anglo Asia, which opened in the early 1960s, were two of the first Indian restaurants to open on Curry Row—the name I’ve affectionately given the downtown stretch, which locals simply call by its actual name, Ocean Road. Anglo shut its doors some 25 years ago, but Star of India still stands, and since business registration records were only converted to a computer system in 2004, much of the information about exactly when that first curry house opened and how many have since is hard if not impossible to find. But as far as South Shields’ residents are concerned, the restaurants might as well have been here forever: these curry houses are just as much a part of South Shields as the local Geordies themselves. And though they are frequented by the town's people as hubs of celebration for all sorts of occasions, Christmas especially, as well as a place to enjoy their favorite dishes throughout the week, it’s not necessarily a career path for the young people working there.

“This is the next generation,” says Nazrul Islam, who immigrated to England in 1983 and runs Tandoori International with his two brothers. “With my generation it was different; we liked to work in the restaurant trade. We took over the restaurant from my late father in 1991. [For] Bangladeshi people moving to the UK, the main trade was the Indian catering business. I think [the younger generations] prefer daytime jobs.”

Nazrul Islam, who immigrated to England in 1983, runs Tandoori International with his two brothers.

Indeed, this has been of recent concern in the United Kingdom, heightened by the shift in immigration laws that took effect in April where people from non-European Union countries who have lived here for less than 10 years and earn less than £35,000 will be deported. Throw in the recent Brexit vote, and you have total uncertainty: nobody quite knows what will happen to the country’s immigrants—or their cuisines.

Sayd Ahmed, chairman of the Bangladeshi Association and a member of the Indian catering community in southwest England for 19 years, has said that the shortage of qualified Indian chefs and caterers has been going on for a decade, but the full effects are being felt more now.

The Sheek Roll Kebab at Monsoon.

“If this crisis continues for any longer,” he told The Mercury, “then a lot of local people will lose their business and will be unemployed. There are not many people coming in to do the job, and there are also not many home grown chefs and cooks because all our youngsters are not choosing to come into this industry.”

Islam, who has run Tandoori International for 25 years, is facing that exact predicament. Although he loves running his family’s curry house, he admits he has tried to convince the younger generations – including our server who didn’t even know how to spell the dish I’d ordered – to stick around longer than just a temporary way to earn some cash while completing their studies, but to no avail.

[quote position="left" is_quote="true"]You have to go with the times. It seems I’ll run my restaurant until I can’t work anymore.[/quote]

“At the end of the day it’s their choice,” he says. “You have to go with the times. It seems I’ll run [my restaurant] until I can’t work anymore.”

Twenty-three-year-old Raju Choudhury is an exception to the rule; he’s working hard to keep his own family’s legacy alive amidst a shutdown since last September. Their restaurant, The Momotaj, was among those first curry houses to open on Ocean Road back in the late 1960s. It was originally run by Choudhury’s father, Chanu Miah, who came to South Shields when he was 13. Choudhury’s father passed away when he was 11, and his older brother took over the restaurant until Raju turned 18 and was able to take the reigns himself.

“I hadn’t originally wanted to be in the restaurant trade,” says the Geordie native, “but in the end I don’t mind being there. I did well. I turned it around because my bother had let it go down the drain a bit.”

After 30 years sans updates, The Momotaj was due for a makeover last year, but when the structural engineers came for an inspection, they listed a price tag of £50,000 for the renovation due to building decline. Choudhury didn’t have the funds to cover it and instead decided to shut down to look for a new location to re-open.

“There aren’t many places available on Ocean Road now,” says Choudhury, who works in a variety of part-time gigs, including taxi driving, nightclub managing, offshore rigging and asbestos stripping to make ends meet. “I don’t mind moving off Ocean Road. There are a few restaurants that show they can be quite busy even in they are not [here]. Our name has good history to it; my customers would travel to the Momotaj wherever I open. I’ve even got people asking me on the Facebook page all the time when I’m going to open up again.”

Choudhury credits his success to the quality of his restaurant’s food, not the décor, but for those looking for atmosphere, Ocean Road has that too. Some curry houses have opened up in the last few years that are flashy; they’ve got sparkly window décor, plush silver chaises, and an feeling more akin to that of a nightclub. And while that might draw the crowds in, it won’t keep them coming back.

“I’ve been to a couple of them and I don’t think the food’s that great,” he says. “I’m not just saying that because I’ve got a restaurant. I think the best one on Ocean Road at the minute is Spice Garden and they’re not that flash.”

Owner of Monsoon Restaurants Showkoth Choudhoury—who has no actual relation to Choudhury, but who calls him his nephew affectionately—shares Choudhury’s sentiment: “[I see] the bigger restaurants doing the better business, but I could guarantee the food isn’t…” he trails off, “well, let’s just say I’m very passionate about food. People think where it’s busier, it’s better food. I know my place isn’t ‘wow,’ but something that I can’t eat, it’s not coming to your plate.”

Mohammed Mosahid, the manager for over 20 years at one of Curry Row’s flagships, Star of India, calls their food “different.” And although Choudhury is candid in his opinions on the other Ocean Road curry houses, he’s quick to remind me that they’re not enemies.

“Everyone is willing to help everyone else out,” he explains. “If you’re running low on something, they’ll not be spiteful and not give you anything.”

Much of the competition on Curry Row is driven by the extremely low price points; there are three-course meal options for as low as £6.95 – or about $9 USD. You get a starter—for example, a Chicken Tikka or Onion Bhaji; a main like Lamb Vindaloo or Beef Madras with rice, and then coffee or ice cream for dessert. Choudhury’s father is said to be the first one to have started the special prix fixe menus, which Islam and Choudhoury both back up. He confesses: “I don’t think [the other restaurant owners] liked it very much, but it’s what they just had to do [to compete].”

Monsoon's Ke Karishma is the chef's selection of appetizer specials.

Monsoon’s Choudhoury finds it hard to make ends meet when they all have to compete for the lowest priced prix fixe menu. Born in Bangladesh, he came to the UK when he was nine with his father and ended up in South Shields in 1990. By age 16, he took a job at Momotaj and ended up working in a few other of Curry Row’s restaurants after his father—who had worked on Ocean Road for many years after they settled here—had a stroke and needed help make ends meet.

“I never really thought I’d own or run a curry house,” Choudhoury says. Though he was always incredibly passionate about the food, he says he was focused on his studies to land a better job elsewhere. “But I ended up here,” he says.

[quote position="full" is_quote="true"]I never really thought I’d own or run a curry house. But I ended up here.[/quote]

Through the ‘90s, Choudhoury worked as a server full-time and in 2000, began his studies part-time. After a successful career in teaching for 14 years, he and some friends decided to open up a restaurant on Ocean Road as an investment opportunity. It was meant to be a mostly hands-off joint venture that he’d have a 12.5 percent stake in, but that’s not what happened.

“They borrowed a lot of money from me and then deserted me,” he explains. “So I ended up with their shares too. They couldn’t pay me back, and [I had to take over.]”

The writer breaks a piece of naan.

Choudhoury’s heart lies in teaching, which he still manages to do as a substitute and which helps bring in an income for his wife and three children who live with him in South Shields. But those low price points haven’t allowed him to take home an actual wage in years, he says. On the night that we ate at Monsoon—a succulent, spice-full meal of butternut squash and chicken tung, Begun Gosht (lamb and eggplant) and Suka Mishti Murug (a Bangladeshi Chotpoti version of sweet and sour chicken)—Choudhoury looked genuinely happy chatting to a couple celebrating their 40th wedding anniversary. Although he says he doesn’t want to be in the trade, he keeps it going.

Ultimately, the celebration of the food is where the dedication lies—for Islam and Choudhury and the rest of Curry Row, too. While some sleeker curry houses open and old ones close, much of the next generation seeks other career paths. Immigration laws hang in the balance. And we’ll be getting our third curry this week for less than a tenner, as they say.