Debating The Virtues (Or Failings) Of German Style Beer 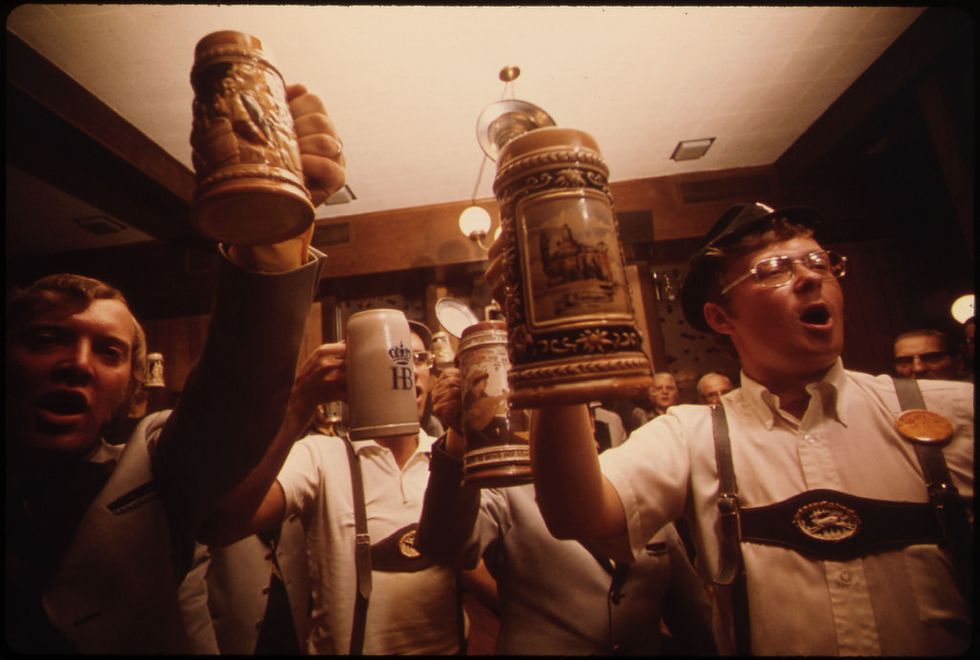 We decided to have a debate. Is lager a legit beer style? We enlisted two experts—amateur brewer and noted beverage curmudgeon Chris Chafin and GOODFood Editor Maxwell Williams—to a drunken-style word battle.

Do not drink German beer

Chris Chafin: If you have a friend who is an aspiring beer snob, one thing they probably like to talk about is German beer. Maybe they’re always bugging you to go to the biergarten that just opened in town. It’s got pretzels and spaetzle and a bunch of legendary German brews.

While you should definitely take a trip to that biergarten—because both pretzels and spaetzle are some of the best food on the planet—I am here to tell you that German beer is, in fact, terrible. People only think it’s good because they misunderstand history.

The main reason that people think beer from Germany is better than that of anywhere else is because of the country’s 500-year-old beer purity laws, or the Reinheitsgebot. These are a series of regulations on beer ingredients, the most famous of which was adopted in Bavaria in 1516. These laws stated, very simply, that beer could be made of water, barley, and hops. If you sold beer with any other ingredients, it would be confiscated and destroyed. It’s like if Anthony Bourdain got to go into bad restaurants and throw their truffle mac and cheese in the garbage. Pretty metal. Some form of these laws is still enforced today.

While this wasn’t literally the world’s first food safety law, as some Germans like to claim, it was a guarantee that German beer would be high quality and reliable at a time when a lot of other food wasn’t. Germany has been using it as a marketing tool for the hundreds of years since.

Some scholars argue that these laws weren’t passed to protect beer in the first place, but rather to make sure that grains like rye and wheat would be used to make bread instead of beer.

Whatever the intent, the laws had an immediate strangulating effect on German beer culture, which continues to this day. “Our brewing culture was paralyzed,” beer sommelier Sylvia Kopp told NPR last year. “All the innovations that we had in beer was packaging, new sponsoring ideas, a new bottle, so there was little innovation with the product itself.” Regional beers, specialty beers, and varieties that weren’t pilsners all went basically extinct. Today, all real German beers—beers you might actually find in a regular bar in Germany, as well as the imports you see—are almost exclusively low-alcohol pilsners. They have passed as good beer for a very long time.

It’s impossible to overstate just how young the revolution in styles and flavors of beer is. Brooklyn Brewery opened in 1987, when its flagship beer (which is pretty mild) was considered an insanely outré product. I once interviewed its founder, Steve Hindy, who told me that people would take a sip of it and spit it out, because they’d been conditioned to expect very little flavor from decades of drinking mainstream U.S. beers. Those beers—Budweiser, Coors, Busch, and others—were largely inspired by German beers, and in many cases founded by German immigrants.

There’s obviously been a lot of changes in beer culture in the decades since. Today, the things I want from beer are: a strong flavor and a reasonable alcohol content. Beer is very filling and kind of expensive. I’d like to not have four or five in a sitting—maybe just one or two would be fine.

[quote position="full" is_quote="true"]If you enjoy consuming a flavorless liquid in huge quantities, may I suggest switching to water?[/quote]

Here is what you get from German beer: a flavorless liquid with no alcohol. Real German beer is usually around 3.5 percent alcohol by volume. For comparison, Budweiser is 5 percent ABV and smaller craft beers (especially India pale ales) regularly top six to eight percent. This is why the primary way to drink German beer is out of a novelty glass bucket in the shape of a boot. This is why they measure beer as often by the length of the glass (those “yards” for which Oktoberfest is famous) as by the actual volume of liquid. You need to consume absolutely gargantuan quantities of it to feel as if you have had any beer at all. That’s kind of gross.

Maybe this is what you like in beer. If this is the case—if you enjoy consuming a bland liquid in huge quantities, may I suggest switching to water? It’s actually good for you, and if you drink a bunch of it in a short amount of time, you’ll be about as buzzed as you’d be from drinking German beer. Instead, buy from small craft breweries in America, which are—in my opinion—producing the best beer in the world today. There are a huge variety of products—all of which are very good.

This is basically the opposite of German beers, which have no variety (and are all bad).

Do not drink German beer.

Traveling with friends in the southern reaches of China, we decided to take a bus and walk into Vietnam. My travel companions and I had been waylaid on a bus from Guangzhuo, and the date on our visas to make the crossing was listed as the day before. We walked past a man with a large automatic rifle and on to the immigration office where there was a several hour-long wait. When we finally reached the front of the line, the Vietnamese border guards said there was no leeway on the visa date, and sent us packing back to China with a stern reprimand. We walked two miles back to the only hostel in town.

Let’s just say it was a long day. And it was sweltering. We wanted nothing more than to collapse on the hostel bed in the safe enclosure of a mosquito net. Next door was an internet café, the only one in town, from which we emailed our loved ones before setting up a table outside the convenience store, where we purchased a couple large bottles of lager. They were room temperature—which is how they drink beer in Southern China—but they were light and delicious and more refreshing than a cold glass of water. That night we slept well. The next day we moved on to Chengdu to see the pandas. Nearly 15 years later, I still remember that beer.

This kind of crisp refresh is only possible with a German-style brew. India pale ales have earned a reputation in the past dozen or so years as being the microbrew of choice, while German-style lagers have been denigrated to cheap beer status. Budweiser, the great German-American disaster, is best served poured into the dirt. Other American canned suds—Busch, Coors—are equally bad.

But lagers (and the Czech counterpart pilsner, born in the Bohemian city of Pilzn) can be beautiful. They are easier to drink than IPAs, which I sometimes find to be syrupy or too herbal. I can hardly ever drink more than one IPA or pub-style ale. Plus, IPAs give me severe headaches in the morning. With German-style beers, I can drink well into the night, which is what I imagine the Münich folks do in their lederhosen and dirndls during the Bavarian Oktoberfest, waking up the next morning ready to roll.

I’m not slagging IPAs. They can taste fantastic. But I only really crave them in the wintertime. In the summer or when I’m near the equator, like on the Southern Chinese border, lagers and pilsners are undeniably better.

Lagers are popular around the world. China has a long history with German-style beer. In fact, it was German settlers who founded Tsingtao, one of China’s most popular beers—and definitely their most popular export—in 1903. The best selling beers in Ethiopia (St. George Lager), Italy (Peroni), South Africa (Castle Lager), Thailand (Singha), and South Korea (Hite) are all inspired by lagers—or at least initially, by German brewing styles.

[quote position="full" is_quote="true"]In the summer or when I’m near the equator, lagers and pilsners are undeniably better[/quote]

Plus, there are highly rated pale lagers: New Glarus Brewing Company’s Totally Naked beer has a “world-class” score of 97 from BeerAdvocate’s “The Bros" (the site’s two founders), and Jack’s Abby Brewing’s Hoponius Union has an “outstanding” score of 94.

Despite its reputation, German-style lager can be a treat: an easy, no-fuss beverage—particularly on a hot day. I’d dare you to drink more than one IPA on a sunny afternoon, but I’ll be too busy drinking a cool lager and soaking up the sun to care.