Infographic: The Least and Most Corrupt Governments Around the World 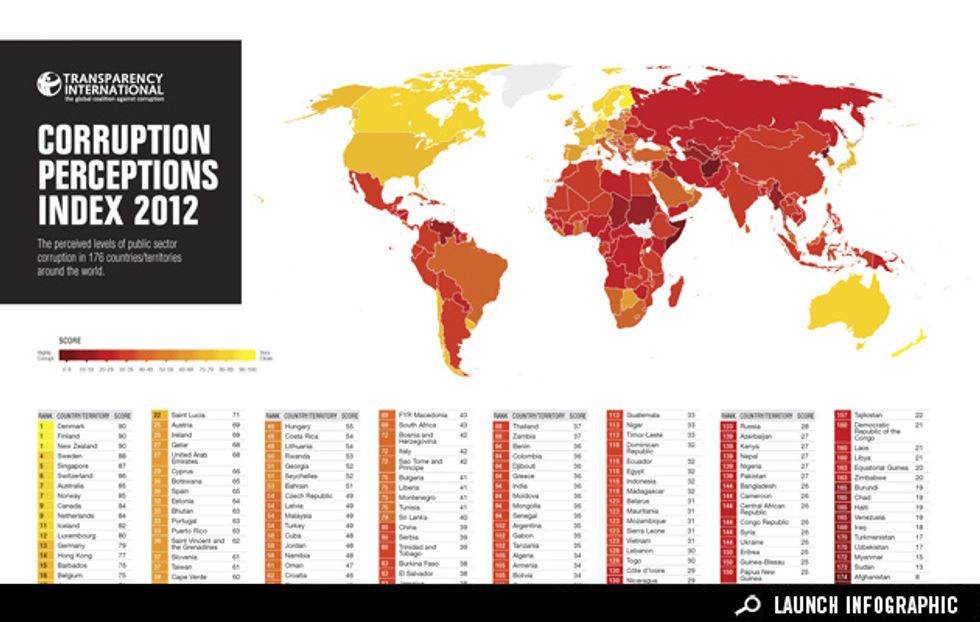 Corruption can happen anywhere. When politicians put their own interests above those of the public. When officials demand money and favors from citizens for services that should be free. Corruption is not just an envelope filled with money though—these people make decisions that affect our lives.

We know corruption is a problem around the world. But how bad is it and what can be done? The Corruption Perceptions Index measures the perceived levels of public sector corruption in countries worldwide. Based on the expert opinion collected by 13 global surveys, countries are scored from 0 (highly corrupt) to 100 (very clean).

Two-thirds of the 176 countries ranked in the 2012 index score below 50, showing that public institutions need to be more transparent, no country scores a perfect 100.

What does this mean for people? In some countries, people face extortion in schools, hospitals, and other public offices. In others, corruption takes more subtle forms, with people in power favoring vested interests over the public interest when making and enforcing the law of the land.

The Corruption Perceptions Index is prepared by global anti-corruption organization Transparency International, who publish the index to force governments around the world to take notice of corruption. But recognizing the problem is only the first step towards a solution. That is why we help citizens to demand accountability from their leaders. And we show governments what they can do to tackle corruption.

We have local offices run by local staff in over 100 countries, from Russia, where we recently went around asking police for identification; to Guatemala where we trek out to remote communities to train them to deal with government; to campaigns against fake teachers in Niger. We also have free-of-charge, walk-in corruption advice centers in over 50 countries.

These are not just limited to the developing world. We can encourage people to blow the whistle when they see corruption in daily life. We can help people monitor government spending that is increasingly being made available online. We can ask multinational companies to be more transparent (and ask interest groups to stop lobbying against anti-corruption rules).

In the Corruption Perceptions Index 2012 Denmark, Finland, and New Zealand tie for first place with scores of 90, helped by strong access to information systems and rules governing the behavior of those in public positions. Read more about these countries here.

Afghanistan, North Korea and Somalia once again cling to the bottom rung of the index. In these countries the lack of accountable leadership and effective public institutions underscore the need to take a much stronger stance against corruption. Read about how finishing bottom plays out in daily life in this blog post on Afghanistan.

Under-performers in the Corruption Perceptions Index 2012 also include the Eurozone countries most affected by the financial and economic crisis. In a June 2012 report on corruption in Europe, Transparency International warned Europe that the crisis should be a wake-up call on the need to address corruption risks in the public sector to tackle the financial crisis. Read more on the challenges faced by the lowest-ranking EU countries Greece, Bulgaria, and Italy.

Meanwhile, genuine transparent political reforms after democratic elections have not taken hold in Arab Spring countries, as they continue to languish towards the end of the scale even after the onset of the revolutions especially Egypt significantly dipped in its ranking.

A warning for businesses

While the Corruption Perceptions Index measures how corrupt experts think public sectors are, businesses need to take careful note of the results. Doing business in a country where corruption is rife, means higher costs, delays and losing business to competitors who pay bribes. All but one of the world’s fastest growing economies score less than 40 out of 100.

To keep the global economy corruption free, strong enforcement of global standards like the G20 anti-corruption action plan and rules criminalizing foreign bribery will be vital. Multinational companies, meanwhile, must be transparent about their operations. Of the world’s 105 biggest companies, 85 do not disclose income tax payments in any foreign country of operation on their corporate website, according to a Transparency International report from July 2012.