The results are in! We made a map showing your picks for the best craft beer brewed each state. 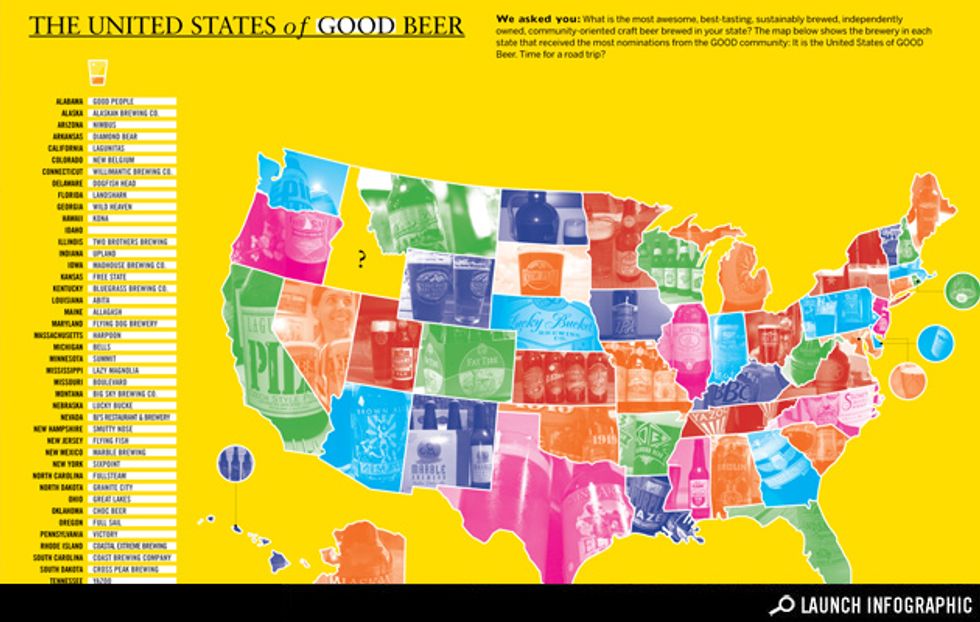 Earlier this week, I posted a map that the Houston Press had put together, showing the United States of Beer. Although some states were lucky enough to be represented by a craft brew, the inclusion of such industrial swill as Bud, Keystone Light, and Pabst Blue Ribbon brought out howls of protest in the comments thread.

It turns out, much to my delight, that the GOOD community is passionate about GOOD beer! So we asked you to nominate the most awesome, best-tasting, sustainably brewed, independently owned, community-oriented craft beer brewed in your state, and then we made our own map, showing the breweries with the most nominations.

It is truly the United States of GOOD Beer, and you can click on the image above to check it out in detail. There were some very close calls—in New York, Ommegang received only one nomination less than the winning Sixpoint, and in Pennsylvania, Tröegs only narrowly lost out to Victory. GOOD's home state of California was the most hotly contested, while Michigan's Bell's Brewery scored the clearest win. We were excited to receive nominations from forty-nine states (beer lovers of Idaho, where were you?), many introducing us to amazing-sounding beers and breweries that we hadn't come across before. Time for a road trip?

As I recently learned from the documentary Beer Wars, three companies—Coors, Miller, and Anheuser-Busch—account for an astonishing 78 percent of the United States market, with 70 percent of beer wholesalers only selling Anheuser-Busch products. As Jim Koch of the Boston Beer Company (makers of Sam Adams) said in the movie, "It's as if all we know about food, we learned from McDonald's!"

It's clearly time for a beer revolution. After all, to my mind, part of drinking responsibly should mean paying attention to how and where your beer was made, and who your consumer dollars are supporting. So, thank you for all the comments and suggestions, and if you're heading out to the store to stock up for Sunday's Superbowl, we hope our map will inspire you to drink the right thing—and perhaps even discover a new favorite.

UPDATE: This map has been updated. We replaced a mislabeled photo for Washington's Epic Ales; added Star Hill Brewery for Virginia and Capitol City Brewing for Washington, D.C.; and made a few spelling corrections. Thanks for alerting us in the comments and please continue to nominate your favorite brews.

ANOTHER UPDATE: Thanks again for your nominations. In response to popular demand, we are working on a poster of the map but need your help to fund it! Hop on over to our Kickstarter campaign page and become a backer!