Reporter Tries To Incite Panic During A Live Interview, Gets Schooled On Hurricanes Instead

When the interview subject knows far more about the weather than the reporter does... 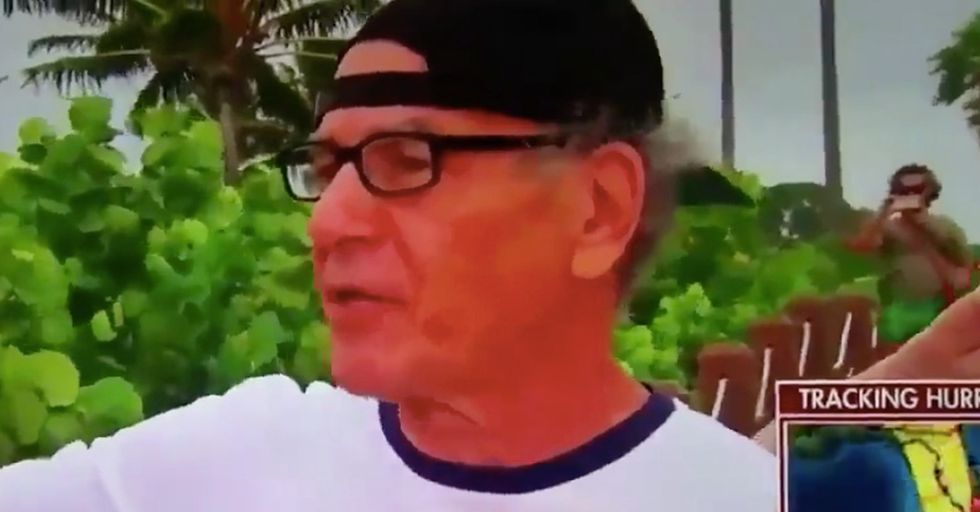 Most TV viewers have seen enough storm coverage (and news in general) to know that, in the absence of an actual development to report, broadcasters will go after a sensational human interest angle. However, when one field reporter in Florida went trolling for passersby he could heroically urge to “find someplace safe,” he didn’t anticipate stumbling upon an incredibly well-informed man out for a stroll. So well-informed that the man nonchalantly rattled off the latitude, the distance the eye is from where they stood, and the storm’s most recent bearing … in degrees.

Fox News would have been much better served by having their “expert” reporter simply hand his microphone over to this walking encyclopedia of Hurricane Irma knowledge. But, of course, that’s not what happened. The reporter offered little more than a perfunctory “Thanks” after rushing the man through his detailed analysis, clearly eying the landscape for some sap that will allow the reporter to offer a somber and trivial, “Be safe out there,” so he can check that box and get out of the storm.

@tabvipr @BarstoolNewsN He had dip outta there so quick lmaoooo you know the producer was in his ear like ABORT.
— maktuub (@maktuub)1505059120.0

As for the interview subject, his identity hasn’t been confirmed, unless you put much stock in a tweet such as this:

So while he might not be a meteorological savant, he is a guy in Florida, meaning there’s a decent chance he’s into boating, which apparently would make him far more qualified to discuss the threat of Hurricane Irma than the “professional” Fox News is paying.

If you’re wondering how his analysis stacked up to the actual path of the hurricane, here you go.

He was off on the trajectory a bit, but the biggest takeaway — that the storm was still 200+ miles away — was spot-on and more than enough to shoot down the reporter’s schtick.