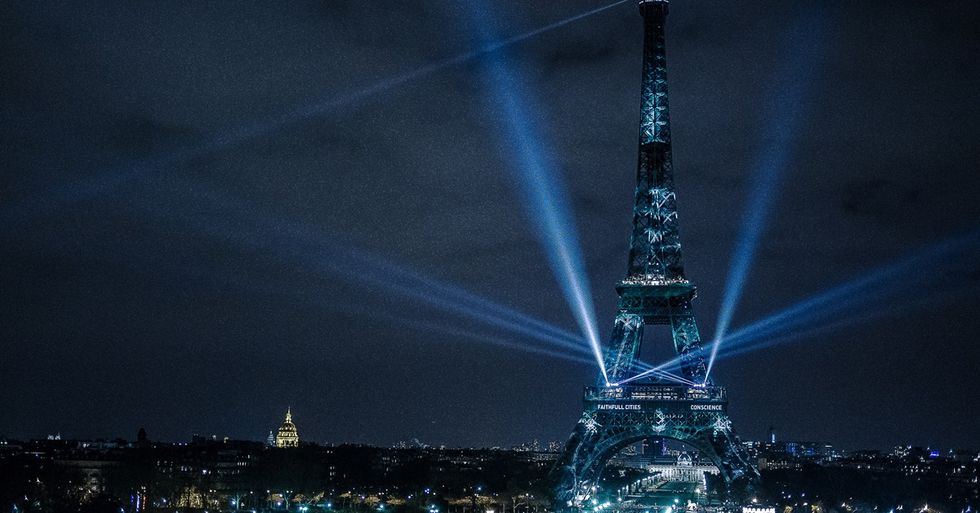 As the world gathers in Paris to discuss climate change, the reverberations of recent terrorist attacks are hard to ignore. In the aftermath of ISIS’s massacre of more than 130 people on November 13, French authorities have put restrictions in place to clamp down on public demonstrations. In Paris, over 200 activists were arrested after fighting with police at a street leading to the Place de la Republique. Outside of these arrests, protests have been peaceful. Restricted from mass demonstrations because of security concerns, climate change activists placed more than 20,000 pairs of shoes at Place de la Republique as a silent protest.

Around 150 world leaders are due to attend the Paris talks from November 30 through December 11, including President Barack Obama, China’s Xi Jinping, India’s Narendra Modi, and Russia’s Vladimir Putin. Their job is to forge an accord that could work to avert the most devastating effects of climate change and potentially redefine the economy of the 21st century. According to CBS News, the summit hopes to get world leaders to “agree to deep emissions cuts and to help poor countries cope with global warming.” Failure in Paris could lead to worsening droughts, rising sea tides, food shortages, and other catastrophic events.

Over the weekend, more than 570,000 people gathered worldwide to pressure world leaders to make substantial gains toward protecting the planet. In Paris, its most iconic landmark, the Eiffel Tower, played host to projected images calling for a shift to 100 percent renewable energy and the protection of the world’s forests. The installation’s creator, Naziha Mestaoui, said, “I created this installation so that people everywhere can realize what is possible if we come together. We can protect and regrow our forests, we can tap the natural powers of the sun, the wind, the earth, and the sea, and we can build a safer future if we go 100 percent clean energy for everyone.”