“They all said, 'we’ve got your back.' They told me how proud they were of me.” 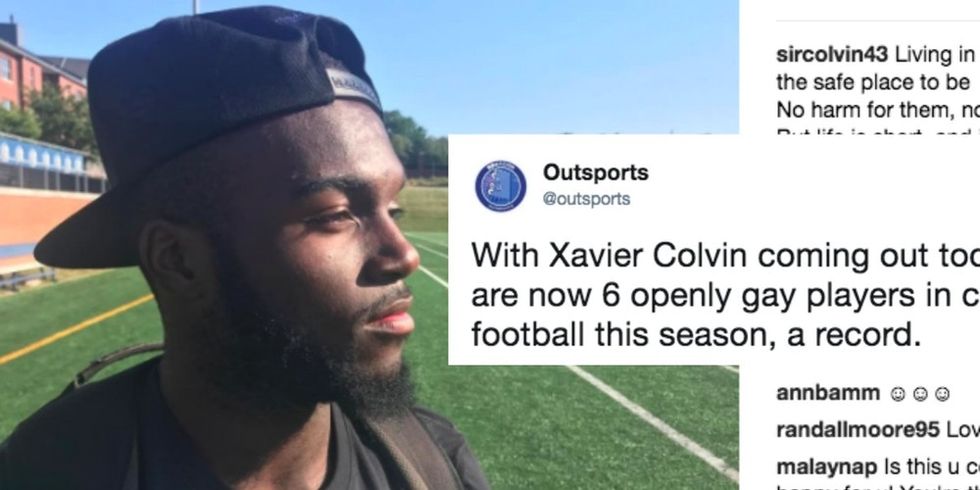 Nervously standing on stage, microphone in hand, Xavier Colvin was about to share some life-changing news with his teammates.

“I don't want to disappoint my teammates or coaches or be looked at as different,” Colvin, a redshirt sophomore on Butler University's football team, later explained to Outsports of what he was thinking in the moment.

But he knew the time had come: He was about to come out as gay.

It took a while to get there, though. Colvin has dealt with bouts of depression and struggled to come to terms with his identity. His father — although loving and supportive — is macho, masculine, two-time Super Bowl champion Rosevelt Colvin. Growing up, the Butler linebacker had no role models in the sports world who were out of the closet.

Standing before his teammates in early August — not entirely sure about the responses he'd have to face — was a major step forward.

In front of his fellow Butler Bulldogs, Colvin opened up about his childhood, personal experiences in sports, and his sexual orientation.

"It had been an amazing transformation for Colvin that had happened so rapidly, going from completely closeted to talking about being gay in front of the entire team. Colvin talked to his entire team about his upbringing, he talked about football, and he talked about being a gay man in the sport that had for so long felt like it didn't want him there."

The response from his teammates made all the nerves worth it though.

"Afterwards I got texts and phone calls,” Colvin said. “The freshmen who didn't know me came and shook my hand. And they all said, 'we’ve got your back.' They told me how proud they were of me. Not even a single negative reaction. It was all positive.”

Colvin's coming out experience isn't just noteworthy at a personal level; it's reflective of an evolving college football landscape, with more welcoming coaches and players accepting LGBTQ athletes on and off the field.

There will be a record number of out LGBTQ players during the 2017-2018 college football season.

Every single one of them has had positive experiences coming out on their respective teams.

"I've never felt so loved and so accepted ever in my life than when I [came out]," Frantz told ESPN in July. "And ever since then it's been great. I've grown so much closer to my teammates since."

Homophobia and transphobia in sports are still very real, but progress is being made.

An international 2015 study found that, overall, 8 in 10 lesbian, gay, and bisexual athletes reported witnessing or experiencing some form of homophobia in sports. Among the six western countries in the study, the U.S. ranked worst. That's why the work being done by organizations making athletics more inclusive, like Athlete Ally, remain vital.

Still, the trend lines toward acceptance are certainly pointing in the right direction. And for players like Colvin, it's making a world of difference.

"I got so caught up trying to please others that I fell into a path of always trying to help others and not myself," Colvin explained. "Finally I became courageous enough to be myself.”

Learn more about these six LGBTQ college football players in the video by Outsports below: