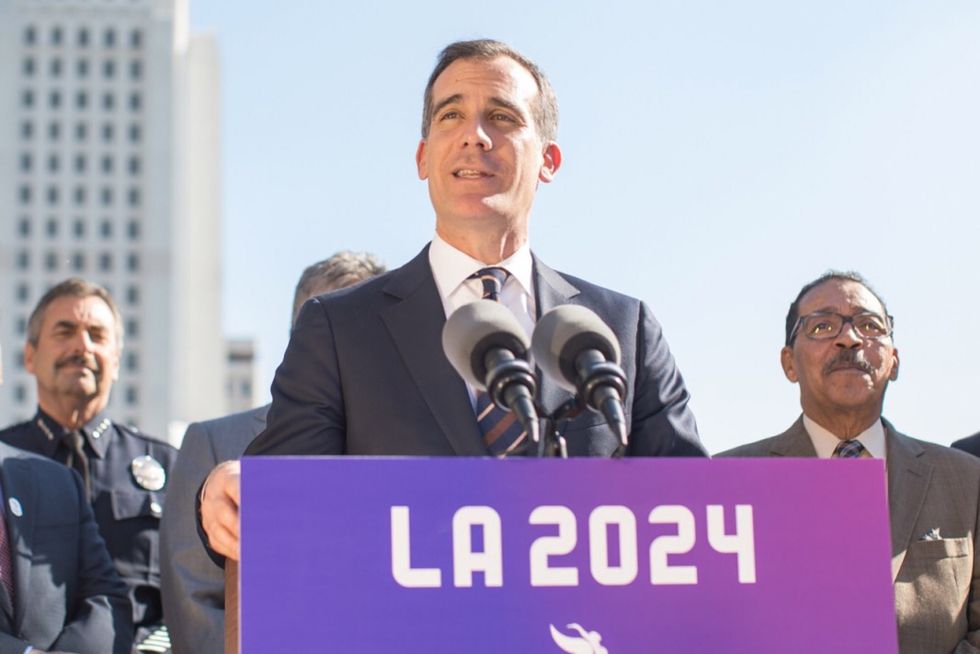 Los Angeles is one of the few places left that actually wants to host the Olympic Games. Huge cost overruns to build up for an Olympiad, followed by the expense of maintaining a bunch of white elephant sports facilities after the athletes leave (How much use is there for a velodrome anyway?) is causing potential host cities to shy away. However, when LA welcomed the world in 1984, the city actually turned a profit on the Games. Even better, those profits have been funding youth sports initiatives for more than 30 years through the LA84 Foundation.

So getting the Games back has been a pet project of LA Mayor Eric Garcetti. He and the LA Organizing Committee have been all in to land the 2024 Summer Olympics, facing stiff competition from Paris—which lost out on the 2012 Games to London and seems to have the inside track. Which means that it might be better for LA to aim for 2028 instead. Garcetti has repeatedly stated he wants no part of that. “We’re eager, ready, and excited to host 2024, and that is all we are focused on,” he said earlier this year.

But it appears Garcetti and company have devised a plan that could make everyone happy: Paris gets their Games, LA hosts one too, and, even better, LA gets more youth sports funding out of an Olympics.

Garcetti confirmed that he’​s in negotiations with the International Olympic Committee to pass on the 2024 Olympics so Paris can host them, in exchange for LA waiting four extra years and taking the 2028 edition. The catch is that the IOC would kick in funds for the mayor’s ambitious youth sports initiative.

“As we’ve talked to the Olympics, they’ve asked us to think about—both Paris and us—what would it take for us to consider one of us going first and the other going second,” Garcetti said at a press conference. “My dream is not so much just to bring the Olympics here, but is to bring youth sports for free to every zip code.”

If this plan goes forward, the IOC will have to decide next week whether to accept a joint bid from two cities at the same time, which it has never done before. That would mean that when the IOC awards the 2024 Games this September, they could bypass a bidding process for the 2028 Olympics and give it to LA right then. Russia, of course, hearing of this plan, has instantly thrown a wrench in the works, now saying they’ll bid for 2028.

That could mean that Paris will get the 2024 Games and LA might possibly wind up with nothing. Classic Russia: They actively try to subvert both America and France, but only effectively derail the United States.