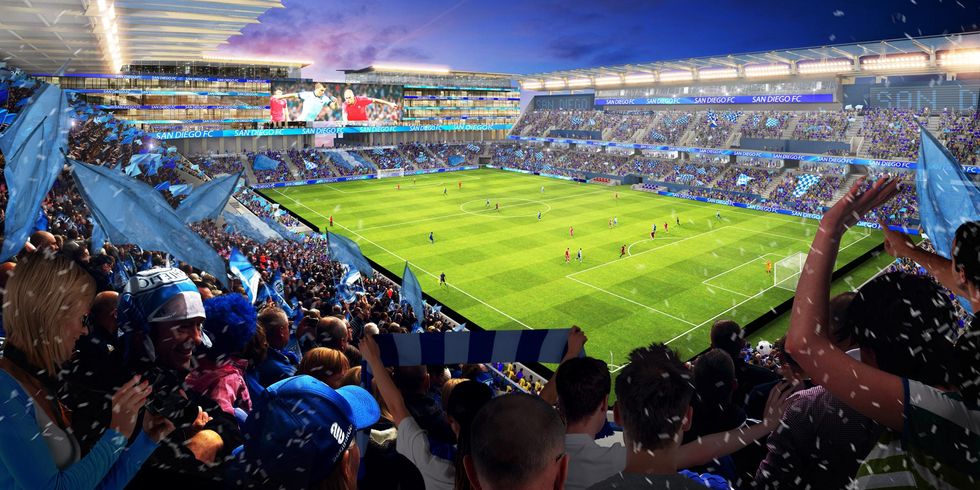 Starting this fall, San Diego will be short a professional sports team. After the city’​s voters rejected an initiative last fall that would have funded a new stadium for the San Diego Chargers, the NFL team has moved to Los Angeles. This leaves the hulking, midcentury concrete block of a stadium where the Chargers used to play without a major tenant. But it also gave FS Investors, a group who want to bring a Major League Soccer team to San Diego, an idea: They would demolish Qualcomm Stadium and redevelop the land to make way for a soccer-specific stadium and a mix of parkland, commercial space and homes.

The voters may get their chance to say whether this project goes forward this November. FS Investors, who could have gone straight to the city council for approval, have decided to bring in citizens on whether this stadium should be built. Why so confident? Because the plan they’re putting up for a vote is pretty different than stadium initiatives in the past.

FS Investors appear to have wizened up to the idea that large municipalities have become more and more intolerant of bankrolling stadiums for billionaires. So, instead of asking San Diego residents for a $350-million handout, like the Chargers did, they are going to put up the money themselves. They’​re only seeking permission to knock down the old stadium and zone the land for their redevelopment, in what will hopefully be a model for future stadium funding.

But, not every prospective MLS owner got the memo about the public’s distaste for funding stadiums with taxpayer dollars. St. Louis, long a bastion of soccer culture in the United States, has been vying for an MLS team much like San Diego. And with the league saying it would award two expansion teams this year, St. Louis put forward a bid most people believed would be successful, owing to the city’s soccer heritage. That all fell apart last night when voters rejected the proposal for providing $60 million in public financing toward a St. Louis soccer stadium. The group had put up a sizable chunk of its own money, but at a time when city and state budgets are strapped, it didn’​t make sense to voters to see their cash going to a stadium.

​There are certainly cities still falling for this pro sports stadium cash grab. Despite ample evidence showing that stadiums don’t actually boost a local economy in the way their proponents say they do, a weird sense of civic pride sometimes trumps rational thought when it comes to sports. The Atlanta Braves have fleeced Cobb County, Georgia, for their new digs. Las Vegas just gave the Raiders $750 million to leave Oakland. And the Miami Marlins have saddled South Beach with billions in dollars of debt for the team’​s home. But what’s really encouraging is that Miami appears to have learned something from the Marlins debacle and rejected the Dolphins pleas for a handout to upgrade its facilities. So what will Dolphin’​s billionaire owner Stephen Ross going to do? Well, he’​s going to put up the $400 million himself. Progress!