No, NFL Player Protests Are Not Harming Papa John’s Pizza

With stock prices down, the company has turned on the NFL. 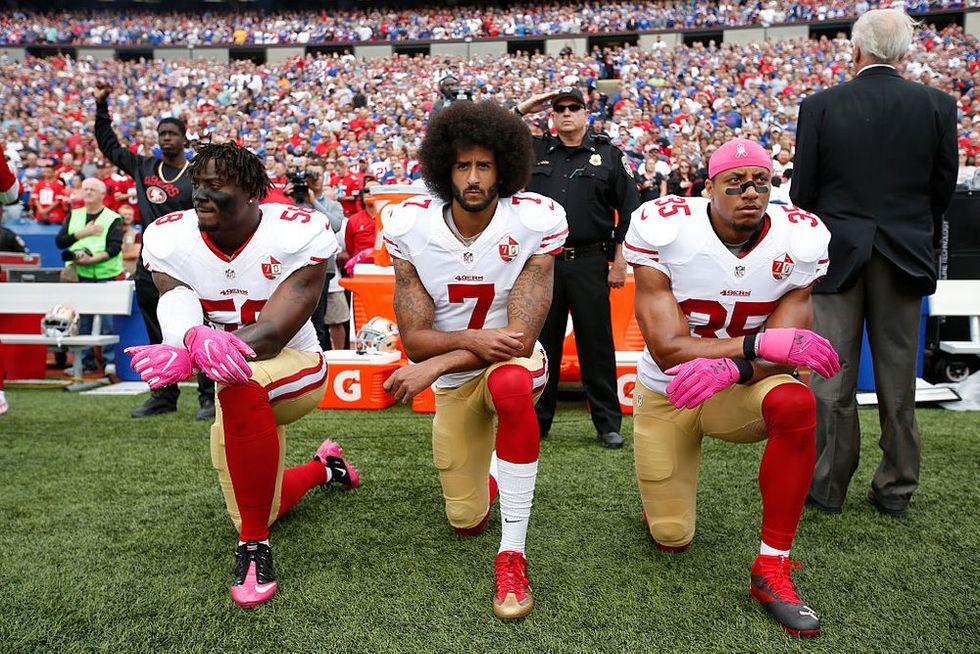 Papa John’s, a chain restaurant that makes arguably awful pizza yet still boasts over 5,000 locations worldwide, saw its stock price drop by 11% this week, wherein CEO and founder John “Papa John” Schnatter saw his net worth tumble by $70 million. (Do not weep for Schnatter; Forbes still pegs his personal balance sheet at around $801 million.)

To calm the frazzled nerves of investors, Schnatter and COO Steve Ritchie hopped on a conference call to bravely announce that the lower-than-expected earnings were someone else’s fault: NFL players protesting state-sanctioned violence and systemic racism.

Papa John’s, which renewed its sponsorship agreement with the league on Aug. 4, thus retaining the company’s status as the “Official Pizza Sponsor of the NFL and Super Bowl,” is miffed that the NFL didn’t rewrite the rules in order to bar players from doing anything but standing and saluting during the national anthem. Papa John’s contends that players’ protests have made pizza-hungry, patriotic fans across the country less likely to purchase pizza.

“The NFL has hurt us,” Schnatter said during Wednesday’s call. “We are disappointed the NFL and its leadership did not resolve this.” Schnatter added that the failure to clamp down on political activity showed a lack of “leadership” on the NFL’s part and “should have been nipped in the bud a year and a half ago,” presumably when Colin Kaepernick first began protesting.

It is true that NFL broadcast ratings are down this year. Moreover, Papa John’s does advertise heavily during games and has sponsorship agreements with 23 teams. That said, how exactly has Papa John’s determined that the decrease in viewers has directly led to a decline in sales? They won’t say, and per ESPN, “Company executives declined to disclose exactly how much money in projected sales Papa John’s lost from its association with the NFL.”

That’s certainly the kind of information you’d think a COO would come armed with if it were going to point the finger at a corporate partner. After all, they’re saying outright that the NFL needs to crack down on protests in order to bolster their bottom line. Further, the decline in Papa John’s earnings doesn’t seem to have a one-to-one relationship to NFL protests, as ESPN’s Bill Barnwell handily pointed out on Twitter:

None of Schnatter’s logic seems to add up. Chain restaurants overall are seeing lower sales numbers, and all televised sports are garnering fewer eyeballs, largely because of cord-cutting.

In February, Ritchie complained that the 8% drop in NFL ratings for the 2016 season was causing Papa John’s sales to flag, though he then pegged it as having only “played a small factor in some of our performance,” and didn’t cite protests at all.

This appears to be just like when Schnatter tried to falsely and preemptively blame Obamacare for lost revenue and threatened to increase prices. Papa John’s is grandstanding about its CEO’s pet political cause, hoping it will deflect attention away from a subpar earnings report and equally subpar pizza.

Considering what should have been a mundane conference call is already being drowned out by ridiculous partisan noise-making, in that respect, Schnatter has already succeeded.