Rihanna Was The Real Star Of NBA Finals Game 1 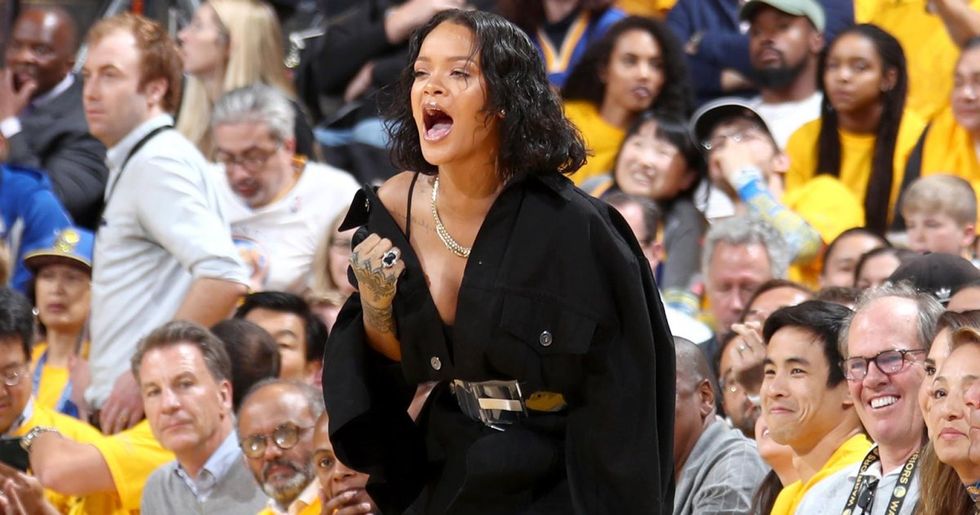 For the third year in a row, the Golden State Warriors and Cleveland Cavaliers are facing off in the NBA Finals. Each team has claimed a title over the last two years. This year will settle the argument about which team is greater. And during the epic rubber match, which features some of the best basketball players of this generation, we’ll bear witness to one of the most monumental championship rounds in sports history. The stakes couldn’​t be higher for these athletes.

Yeah, yeah, yeah, that’​s great and all, but Rihanna stole the show.

The Grammy Award-winner is a LeBron James superfan, so she was in attendance for Game 1 to support King James. She was also there to troll Warriors players and Warriors fans, and pretty much everyone had their eyes on her.

It started when she walked in fashionably late, and color commentator Jeff Van Gundy ignored an epic James dunk to let the people at home know the diva had arrived.

At one point, when LeBron lost a ball out of bounds, she let him know it was cool with her by bowing to the King, making Apple’​s Senior Vice President Eddy Cue none too happy, which you can see here.

As you can imagine, a rich, dorky white dude calling Rihanna a derogatory slur and telling her to “sit down” hasn’​t gone over very well with her fan base. So RiRi’​s navy has proceeded to drag him across the internet for the last 16 hours.

But it doesn’​t stop there. She dabbed on another Warriors fan and then caught the attention of Kevin Durant, who stared her down after hitting a three-pointer that pretty much sealed the game for Golden State.

After the game, Durant was asked about the stare down, but unlike Eddy Cue, Durant had the good sense to not disrespect Rihanna. Just check out the look between Durant and his teammate Steph Curry when asked the question.

Although the Cavs lost, Rihanna let a troll know that her LeBron fandom had not faded.