A woman got asked out by the guy who bullied her as a kid, so she stood him up with this awesome note.

She waited ten years to enact the perfect revenge. 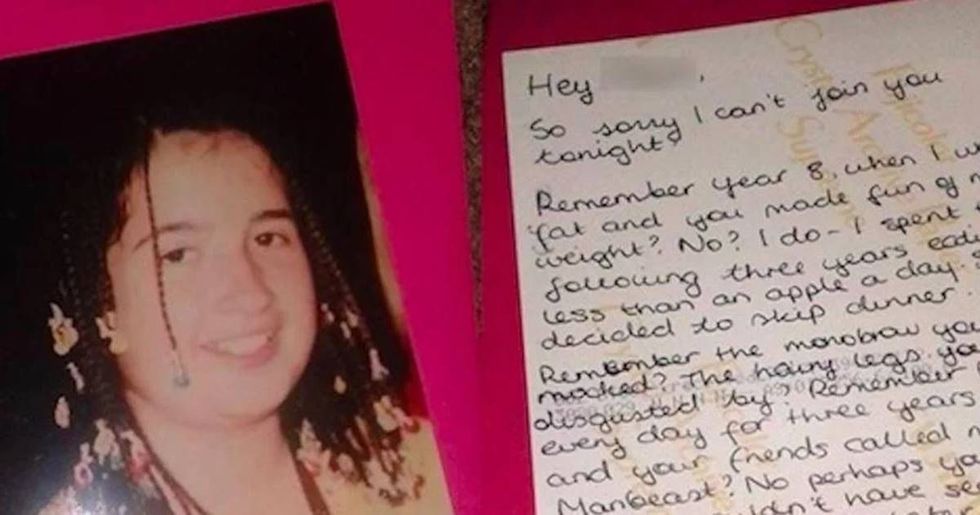 Adult Louisa, still entirely too good for you.

As a kid, Louisa Manning was bullied about her weight and body hair by students in her class. Her classmates thought it was clever to call her “manbeast," a play on her last name.

Those words made an impression on 12-year-old Louisa, who developed an eating disorder and struggled to maintain her self-confidence over the next few years.

Now 22 and a student at Oxford University in England, Louisa was surprised when she ran into one of the boys who bullied her at school and he asked her on a date.

She was also kind of “pissed off." Louisa told BuzzFeed News, “It really made me angry that now I'm attractive, he instantly wants to jump into bed with me." Louisa remembered this boy as being one of the worst offenders back when they were kids.

She thought about turning him down, but then she realized it would be a lot more fun to teach him a lesson. They made plans to meet for dinner, but when the dude showed up at the restaurant, he got this note instead.

The message on the photo (of herself at aged 12) said:

Hey [name obscured],
So sorry I can't join you tonight.
Remember year 8, when I was fat and you made fun of my weight? No? I do – I spent the following three years eating less than an apple a day. So I's decided to skip dinner.
Remember the monobrow you mocked? The hairy legs you were disgusted by? Remember how every day for three years, you and your friends called me Manbeast? No perhaps you don't – or you wouldn't have seen how I look eight years later and deemed me fuckable enough to treat me like a human being.
I thought I'd send you this as a reminder. Next time you think of me, picture that girl in this photo, because she's the one who just stood you up.
Louisa.

Louisa has been too nice to release the guy's name to her many online supporters, who might take out their aggression on him. She writes on Facebook that she doesn't condone violence, just “holding ten year long grudges and then getting sweet, perfectly timed revenge."

Her revenge had one very sweet result: