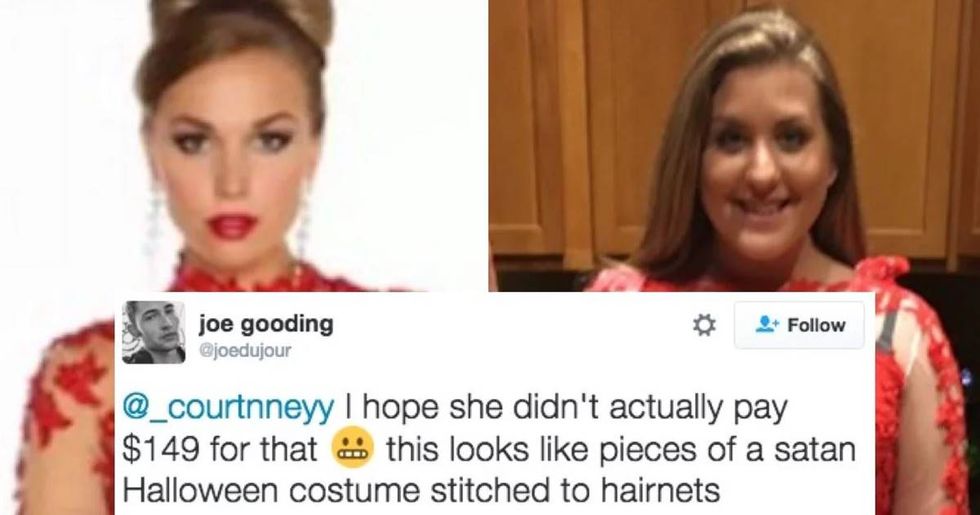 Twitter user and student Juliet Jacoby, is going to prom this year and bought her dress online because that's how kids do shopping these days. Jacoby couldn’t wait until the mailman delivered her $149 red taffeta and lace gown, which she purchased from a seller on the online marketplace Wanelo.

Nice, right? Well, either an evil fairy godmother cursed this dress en route or the seller did not accurately advertise the product. Because the dress that was delivered barely resembles the one Jacoby bought.

When you think your getting a prom dress but... pic.twitter.com/PXsN6iARBZ

Jacoby certainly wasn’t going for a look that screams, “This is a cheap figure-skater costume over which I’ve draped a plastic tablecloth to make it longer.” But that’s what she got.

Jacoby looks surprisingly light-hearted in her pictures, but this girl must’ve broken down in tears at some point, because this:

@jjacoby14 oh wow, how disappointing. The original is a beautiful dress though. So sorry that happened to you.

@jjacoby14 this is so sad omg

Hopefully, she can scrounge up something better, like a sheet with a belt around it or a plastic tablecloth.