Not taking action will have devastating effects on the economy 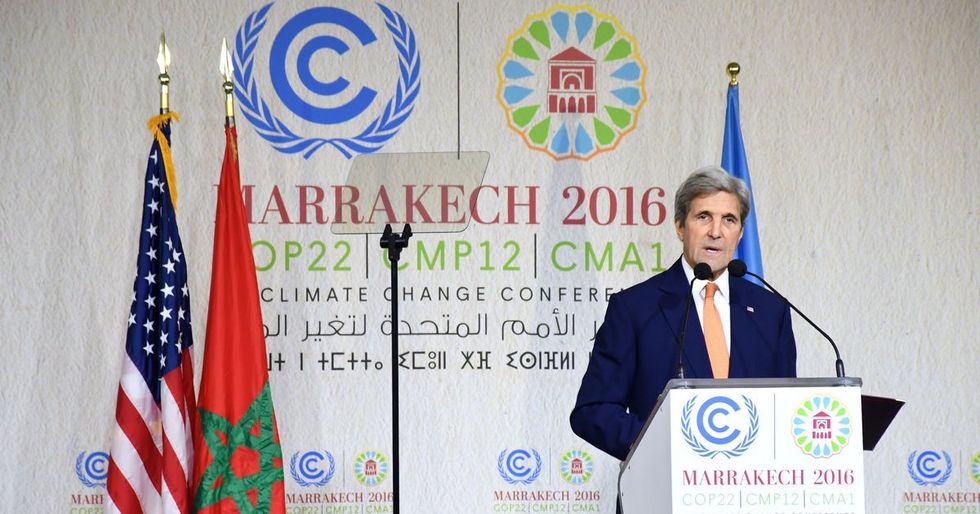 Early Wednesday afternoon, Secretary of State John Kerry prepared to deliver his final address as America’s top diplomat to the United Nations’ climate conference in Marrakech. Meanwhile, in a tent next door, the United Nations Development Programme released a report that anticipated many of the themes that would mark Kerry’s speech—chief among them that committing to ambitious climate action is a crucial economic decision.

“In the long term, carbon-intensive energy is actually today, right now, one of the costliest and most foolhardy investments any nation can possibly make,” Kerry said. “Everyone needs to make smarter choices—with the long game, not the short game, in mind.”

According to the UNDP report, the difference in economic terms between taking ambitious climate actions and proceeding with current emissions promises can be counted in the trillions. The report, commissioned by a coalition of developing nations called the Climate Vulnerable Forum, calculates that if the world acts to halt warming at 1.5 degrees Celcius, then by mid-century the global GDP would be 10 percent—or $12 trillion—higher than if countries proceed with their current policies.

The 1.5-degree path would create approximately double the number of jobs by 2050 than current policies, because of the quicker growth of low-emission power generation, which has the highest employment ratio per watt of energy produced.

The Low Carbon Monitor Report relies on data from Climate Analytics, which considered both the economic boost that investment in clean energy would bring and the losses caused by climate-related damages if temperatures were left to exceed 1.5 degrees.

Because economic losses due to future warming are difficult to predict, Climate Analytics only considered the direct effects of temperature rise and not climate-related losses like those caused by sea level rise or extreme flooding events. So, even this $12 trillion could be a huge underestimation, once you start to consider the economic value of, say, entire island nations that could likely be submerged by 2050.

Since 2009, the world’s most vulnerable nations have insisted on limiting warming to 1.5 degrees as a matter of survival. To allow the world to warm 2 degrees, they argue, is an existential risk to low-lying islands and other regions that are suffering the worst of flooding, droughts, crop loss, and desertification. In the final draft of the Paris Agreement, parties agreed to limit warming to “well below 2°C” and to strive to hold temperatures below a 1.5-degree increase.

What’s the difference? In terms of physical impacts, the UNDP report presents some new scientific analyses. For instance, keeping warming to 1.5 degrees would reduce the length of heat waves experienced in tropical regions each year by a full month by mid-century. Similarly, it would limit the reduction of crop yields by more than 10-percent when compared to 2 degrees of warming.

Though the 1.5-degree goal is often portrayed as too expensive, or a limit to growth, this Low Carbon Monitor Report turns that equation on its ear. “It’s the exact opposite,” said Matthew McKinnon of the UNDP. “Climate change is so threatening to growth that not tackling it has become one of the greatest development liabilities we face.”

It was a sentiment Kerry would echo minutes later:

The final invoice for carbon-based energy includes a lot more than just the price of the oil or the coal, or the natural gas, or the price of building the power plant. The real cost accounting needs to fully consider all of the downstream consequences, which, in the case of dirty fuels, are enough to at least double or triple the initial expenses.

That’s the kind of accounting that we need to do today. Just think about the price of environmental and agricultural degradation. Think about the loss of an ability of farmers in one area because of the lack of water or too much heat to be able to grow their crops today. Think of the hospital bills for asthma and emphysema patients, and the millions of deaths that are linked to air pollution caused by the use of fossil fuels.

The Low Carbon Monitor Report doesn’t only examine the harmful impacts that are avoided, but also the positive gains from investments in clean energy. His Excellency Kare Bebassa of Ethiopia, as the country is the current Chair of the Climate Vulnerable Forum, said that the aggressive emissions reductions were necessary for his country’s survival, but added that “we will also thrive working for 1.5.” Bebassa went on, “As developing nations, we cannot turn our backs on opportunities for creating jobs, protecting our growth, improving health, and increasing access to energy.”

Again, a theme Kerry would soon run with: “Investing in clean energy simply makes good economic sense,” he said. “You can make money, you can do good, and you can do well—all at the same time.”