Every September 11, I Remember This Surprising Story About Steve Buscemi

Indie film’s favorite oddball was once an FDNY firefighter, and he’s never forgotten his roots. 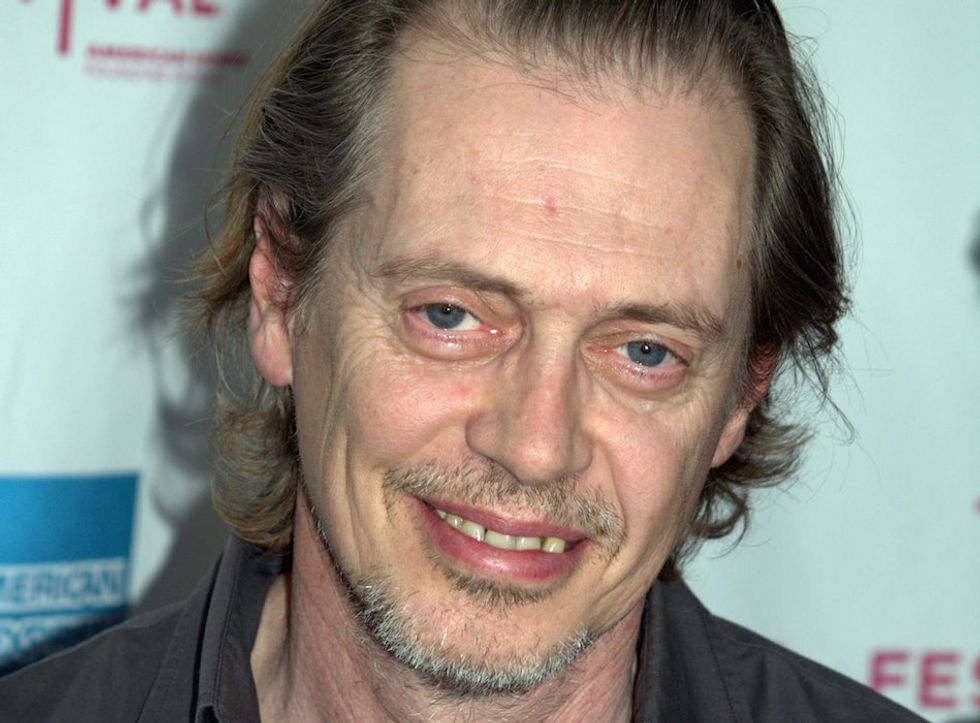 Steve Buscemi, the veteran actor with the one-in-a-million face, known for his depictions of weirdos and gangsters, inspires a lot of creative description: The Guardian referred to him as a “strangely attractive shoelace” and one critic recalled Buscemi as “pale, almost pallid—as if he’d been reared in a mushroom cellar.” The Independent once suggested an “unvarnished ordinariness” was the heart of Buscemi’s appeal. He has been said to look like Don Knotts, John Waters, and Angelina Jolie.

Less frequently noted, though, than the Boardwalk Empire star’s fascinatingly famous features are the details of his life before acting, when he worked as an FDNY firefighter in downtown Manhattan. That’s right, Mr. Pink used to pull people out of burning buildings for a living.

And in September 2013, a post on the Brotherhood of Fire Facebook page informed the world that the actor regrouped with his old engine company in the days after 9/11, lending a hand when it was needed the most. Beneath a picture of Buscemi, it read:

Do you recognize this man? Do you know his name?

Lots of people know he's an actor, and that his name is Steve Buscemi.

What very few people realize is that he was once one of New York's Bravest.

For four years, Buscemi served on one of FDNY's busiest, Engine Co. 55 in Manhattan's Little Italy. He later left the fire service to become a successful actor, writer and director.

On September 12, 2001 and for several days following Brother Steve worked 12-hour shifts alongside other firefighters digging and sifting through the rubble from the World Trade Center looking for survivors.

Very few photographs and no interviews exist because he declined them. He wasn't there for the publicity.

In 2003 he also gave a speech at a union rally supporting higher wages for firefighters and to stop fire houses from closing. He got arrested along with other firefighters.

Also not very well known is that in 2012 Brother Buscemi showed up in Breezy Point, NY and quietly assisted in the clean-up efforts of the damage and mass destruction left by Super Storm Sandy.

Once a brother, always a brother!

Just so we're clear… this guy is a Badass!!!

Tip of the helmet Brother Steve!


In a world of Kardashians and Charlie Sheens, it’s always great to hear inspiring stories like this about successful people in film and television. And those of us who were in New York the morning the planes hit remember the chaos and fear; every set of capable hands was needed. But even “notable” stories like Buscemi’s contribution after the attack are just the tip of the heroic iceberg, an introduction to the amazing narratives of selflessness and courage that define the experience of our active firefighters and emergency service workers.

That’s why in 2014 Buscemi hosted the HBO documentary A Good Job: Stories of the FDNY, presenting “behind-the-scenes footage and firsthand accounts” of what it’s like to work as a firefighter in New York. According to the film’s official description, it captures, “camaraderie and the bonds formed around firehouse kitchen tables, the cumulative effect of trauma, both physical and mental, and the stories—the good, the bad and the exciting.”

In the September 11 attacks and their aftermath, 343 firefighters from 75 firehouses gave their lives to protect and rescue others and many FDNY personnel are still suffering from illness, injury, and trauma.

“Firefighters are great at helping others,” Buscemi told CBS News last year. “They're great at helping each other. But they're not always—they don't always know that they, themselves, are in need … Their first reaction would be, ‘Oh, the next guy has it worse, you know?”

Buscemi, who grew up on Long Island and now resides in Brooklyn, also serves on the Board of Advisors for Friends of Firefighters, an organization that looks out for the welfare of New York City’s firefighters and their families. Beyond fundraising and publicity, though, it seems the personal bonds and sense of responsibility he formed at the Department were strong enough that 20 years after he served he was still willing to throw himself physically into the fray.

“It was a privilege to be able to do it,” Buscemi said at the time of his efforts at ground zero. “It was great to connect with the firehouse I used to work with and with some of the guys I worked alongside. And it was enormously helpful for me because while I was working, I didn't really think about it as much, feel it as much.”

He continued, “It wasn't until I stopped that I really felt the full impact of what had happened. It would have been much harder for me to get through it if I hadn't been able to do that.”