Forget about being “Bad and Boujee” at school 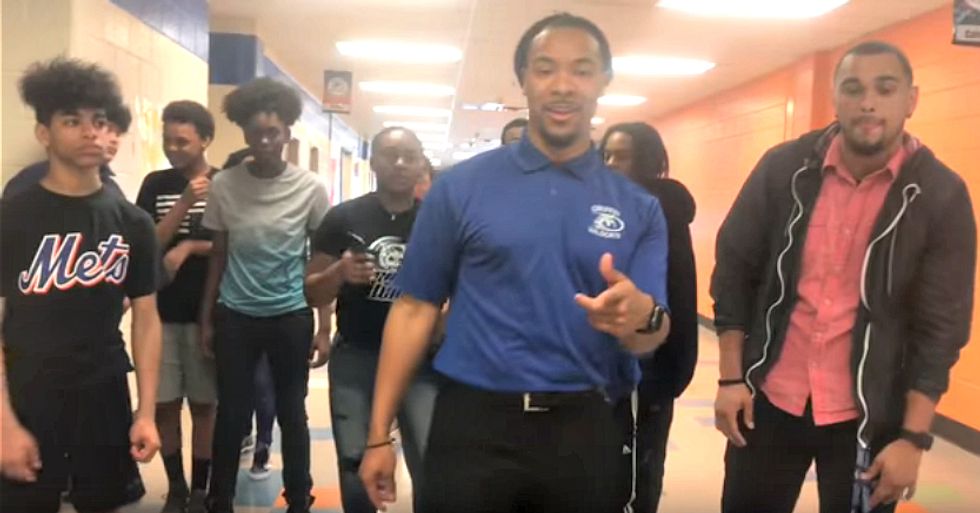 Everyone who loves hip-hop has been bumping Migos’ hit song “Bad and Boujee” since it dropped last fall. The suburban Atlanta trap music trio’s “rain drop, drop top,” lyrics even spawned an internet meme craze, largely driven by teenagers. Now a group of teens in the Atlanta area are taking the trap rap trend and giving it a positive spin.

“Do assignments that’s assigned and study every night until you are the best. I study ’til I pass a test. I study, I study, I pass it, I’m stunting and now I’m better than the rest,” raps one student from Griffin Middle School in Smyrna, Georgia.

The song and video show that kids can be cool while studying for a test, being on time to class, and, ahem, washing their hands after they leave the school restroom. Griffin’s staff thought it would be great “to create a song to change the culture and climate of the school,” says Roderick Langston, a sixth grade math teacher who worked with the teens on the song and the video. (And Langston raps—he’s the one wearing the blue shirt at the beginning.) “We thought rap would be different. We didn't want it to sound like a lullaby, but an actual song people could relate to,” he says.

Griffin is what is called a PBIS, or Positive Behavior, Intervention Support, school. “That rewards students who are doing the right thing,” says school principal Paul Gillihan. The Griffin staff “thought it would be good to have our kids create a rap about our PBIS expectations,” which are simple: “Be here, be ready, and be respectful,” says Gillihan.

But instead of lecturing kids, educators should take a creative approach to teaching about rules and behavior “because it allows the students to showcase their talents,” says Langston. “We as educators set the bar for expectations while allowing students to take ownership within the parameters. Rules will be rules, why not have fun with them?”

Roughly three-fourths of the 1,287 students at Griffin come from low income homes, “and we struggle with trying to keep kids making the right decisions,” says Gillihan. “So this is one of the things we thought would help the kids to relate to what they’re supposed to do.”

It was important to the school that the video include both “kids that have never gotten trouble and kids that have gotten in trouble a couple of times,”—as well as kid who have straight A’s and those that have lower grades, says Gillihan. The teens spent two weeks in April coming up with the lyrics, which they ran by the school staff. Then they filmed the video with an iPad. In April the students premiered the video to the school faculty and Gillihan treated the kids to lunch at from a local restaurant “to acknowledge their contributions to this video,” he says.

Along with being positively received in the community, the video is also changing the students at Griffin, “because they had to understand what we were trying to do with the expectations to be able to write about it in a rap,” says Gillihan. Some of the participants who are going on to high school want to come back in the fall to “talk to kids who will be in the eighth grade next year, and talk about things that they may have done wrong, that they wish had done differently, and how to start off on a positive foot,” says Gillihan. “If nothing else, we’ve made a difference in those students lives going into high school, so that’s positive to us.”

So teachers, next time you want to drone on about following the rules and not being on Snapchat in class, how about showing Griffin Middle School’s music video instead?