A Food Desert In Paradise 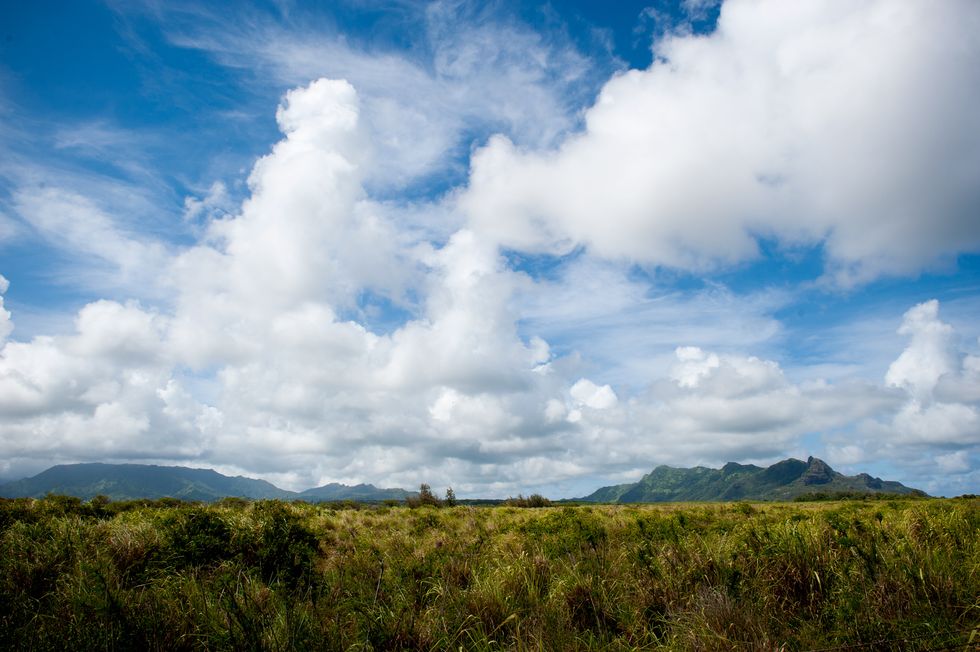 On September 11, 1992, Hurricane Iniki battered the northernmost island of Hawaii. With 145-mph winds and 30-foot storm surges, it was the most disastrous hurricane ever to strike the state. It flattened fields of sugarcane, shut down the tourism industry, killed six people, left 7,000 homeless, and nearly destroyed the production of a little film called Jurassic Park. The cargo ships and planes that deliver food supplies stopped coming. Grocery stores quickly emptied. A black market for fresh produce emerged. The best hope for sustenance was the occasional MRE, or “meal, ready-to-eat,” dropped by helicopter and delivered by the National Guard.

Violent storms used to be relatively rare in Hawaii—there were only five a year between 1992 and 2000. A record 15 hurricanes slammed the islands in 2015, and 2016 has been abnormally active as well. But their “frequency and severity” in the region has been increasing with the planet’s temperature, says Gabriel Vecchi, a climate researcher at the National Oceanic and Atmospheric Administration. It has been expensive to puchase food in Hawaii for decades. Now, the added inconvenience of climate change—particularly the threat of another Iniki—is motivating food activists and political leaders to reexamine the island state’s food system.

Nearly 2,500 miles from the nearest continent, America’s 50th state spends $2 to $3 billion a year importing 90 percent of its food and exporting 80 percent of its agricultural output. It wasn’t always this way. For centuries, islanders were proudly self-sufficient, thanks to abundant edible marine life along the coasts, rich volcanic soil, and an ideal tropical climate with a year-round growing season. But after the islands’ monarchy was overthrown in 1893, American-run pineapple and sugarcane plantations took over the bulk of viable farmland, sending their goods to the rest of the United States.

George “Sun” Hadley picks papaya at One Song, his six-acre food forest farm. All of his crops are native to the region.

By the 1930s, only 36 percent of the state’s food supply was grown locally. Now, at a typical grocery store on an ordinary day, a gallon of generic milk can run more than $6—twice the going rate for the mainland. Agricultural real estate is out of reach for the average grower, regularly selling for more than $300,000 an acre. Even the cows on the islands’ only two dairy farms eat grain that’s been flown in.

“If you talk to the traditional families ... they’ll tell you that when a hurricane comes, everyone scrambles for food. What they are expressing is that their food security is not what it used to be,” says Kawika Winter, director of the Limahuli Garden and Preserve, which works to preserve traditional Hawaiian agricultural practices.

Farmer George Hadley, who goes by Sun, agrees. “Why are we holding on to Hawaiian culture?” he asks. “Because it was right on. It was 100 percent sustainable. And we haven’t been able to achieve anything like it since.” Sun has managed to come pretty close; he’s operated a closed-loop food system across 11 farms without the use of chemicals or machines for 27 years—12 years longer than the USDA has offered organic certification.

This year, Sun started selling his plantains and collard greens to Hanai, a new local market on the island of Kauai, which has achieved what many thought couldn’t be done: Every single item, from its rack of venison to the asparagus, is sourced from Hawaiian land or seas. Supplied by farmers who live nearby and have so far been able to easily restock goods, Hanai has yet to experience a major disruption due to extreme weather.

It’s the type of supply chain embraced by a one-time political party and grassroots movement called Aloha Aina (“love of the land” in the Hawaiian language) that is garnering political and social support for food security through marches, voter registration drives, and community forums. Sympathizers are easy to spot with their “Grown Here, Not Flown Here” bumper stickers.

The group’s de facto figurehead, Dustin Barca, is a former professional surfer and mixed martial arts fighter. Aloha Aina’s supporters call him “the warrior.” In 2014, he joined the Kauai County mayoral race, integrating the movement’s values into his platform. Barca lost, though he far exceeded expectations, securing more than a third of the vote against popular incumbent and ex-Miami Dolphin football player Bernard Carvalho.

[quote position="left" is_quote="true"]I’m sick of complaining at the state building, so now I have my 8-acre farm.[/quote]

Last August, Barca led a march of 10,000 people through Waikiki, Hawaii’s tourist center, to demand rights for local farmers, who face unique hurdles. On some islands, it’s illegal to live on your farm. Elsewhere, vacant farmland is often improperly zoned as residential, while insurance premiums start at $1 million an acre. Though the protest was the largest in Hawaii’s history, Barca hasn’t organized one since. “I’m sick of complaining at the state building, so now I have my 8-acre farm,” he says.

At Ohana (“family”) Farms, Barca trains anyone willing to learn how to craft a sustainable garden to feed a family. Those without land to grow food are given access to his acreage. “What I am really pushing is the ideology of working with your environment instead of taking from it,” he says.

Despite Barca’s frustration with the slow rate of civic progress, food security’s role in state politics has quickly expanded. In 2002, the government established a Food Security Task Force, and an NGO, the Hawaii Food Policy Council, was formed in 2010. In 2012, The Pew Charitable Trusts funded an in-depth set of agricultural recommendations for legislation that would “decrease hunger, increase community food security, and strengthen the island’s economy.” That same year, Hawaii’s Office of Planning released a comprehensive $113 million food security plan.

Last year, Hawaii Governor David Ige designated the state’s first Community-Based Subsistence Fishing Area in the town of Haena on the island of Kauai. The landmark legislation set bag limits for lobster, octopus, and urchins. Up to two fishing poles are allowed per person, with no more than two hooks per line. Commercial fishing and spear guns are prohibited. Citizens, tasked with serving as a kind of neighborhood watch, report violations to rangers.

All produce and meat carried at Hanai Market is locally grown or raised.

Haena is Hawaii’s first community to co-manage its fisheries with the government, along with its farms and forests. The reef at Haena’s Makua Beach is already rebounding after decades of overfishing, says Ige. “It’s an outstanding example of self-determination.”

In September, Hawaii hosted the International Union for Conservation of Nature. Drawing 9,000 policymakers and scientists, it was the biggest environmental conference ever held in the United States, closing with a pledge by Ige to double the island chain’s food production by 2020.

[quote position="full" is_quote="true"]The natural world is a pendulum where one end is the complete destruction of natural resources and the other is the complete abundance that our ancestors lived in.[/quote]

“We, in islands, especially know the limits of our natural environment. ... We cannot afford to mess this up,” Ige stated, adding that, in the era of increased environmental awareness, “we need to change the downward trajectory of our natural resources, in Hawaii and around Island Earth.”

“The natural world is a pendulum where one end is the complete destruction of natural resources ... and the other is the complete abundance that our ancestors lived in,” adds Limahuli’s Winter, who attended the conference. Though pleased with Ige’s commitment, Winter thinks it could be more aggressive. “In all honesty, I don’t use the word ‘sustainability’ anymore because I think we need to aim higher than that. If we can’t figure this out in this small corner of the world, what does that say for Hawaii and for [other islanders]? We can clear a path for others.”