The new technology could merge the benefits of TV and live viewing for fans. 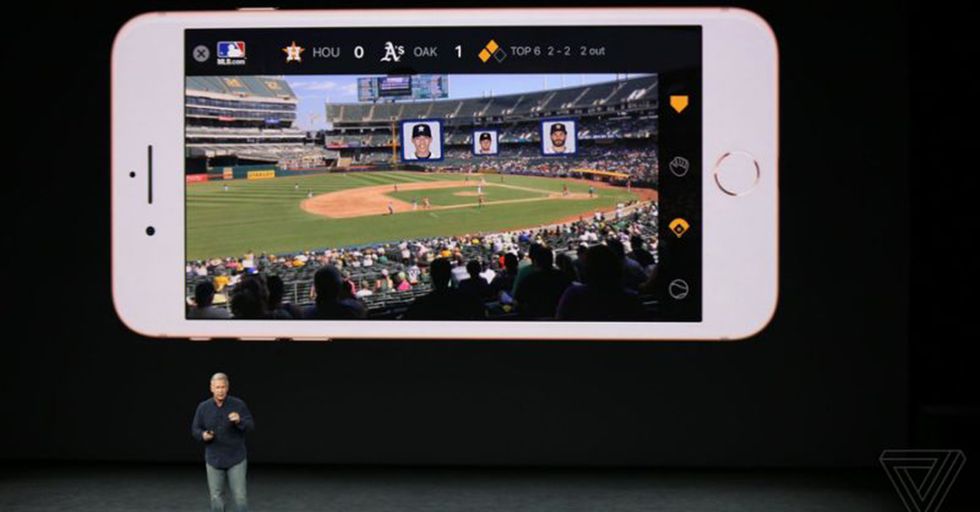 While yesterday’s Apple unveiling left the media with no shortage of talking points and takeaways, the sporting world was, for once, in on the fun during the reveal of the new iPhone 8 and iPhone X. In demonstrating the phone’s advancing AR (augmented reality) capabilities, the company addressed, using a profoundly telling image, an application that would serve as a game-changer for sports fans.

In-venue sports have a huge problem. AR is something that can actually make live viewing unique. Teams need to go a… https://t.co/YGisG4TEp9
— Matt Sebek (@Matt Sebek) 1505240047.0

As many sports fans, in concert with the population at large, have become used to being fed information during broadcasts, they are finding a personally richer game-time experience watching on TV rather than in-person. The image above, even devoid of context reveals the promise of AR in overlaying broadcast-like graphics over the field of play, bringing the benefits of television viewing to the ballpark.

The AR demonstration pictured above features technology from Major League Baseball Advanced Media (MLBAM), an arm of the MLB that has been leveraged by other sports as well. WWE, the PGA Tour, and the NHL are all partnering with the company to develop richer in-game experiences for fans. Adding to the promise of MLBAM’s sports partnerships is a $1 billion investment in the firm by Disney. The technology has been public knowledge for quite some time, but, as expected, a nod by Apple during their high-profile press event will certainly get people talking.

Others were quick to imagine its applications in other sports, not only for fans but for competitors as well.

There could be some awesome things for golfers with Apple's AR Kit. Basically get a view of all hazards and distances thru your screen.
— Ryan Ballengee (@Ryan Ballengee) 1505240374.0

For now, the technology is imminent only in the MLB At-Bat on the iPhone, but don’t expect baseball to be the sole provider of this tech for very long. Anything that makes for a better live experience will incidentally raise the intrinsic value of a ticket, which then means more money at the gate for teams. Considering how spend-happy sports owners can be, it’s unlikely that any league will allow itself to be lacking in this aspect for long.