Q&A with Rebecca Rusch on navigating landmines, her father’s journey, and the new documentary “Blood Road.” 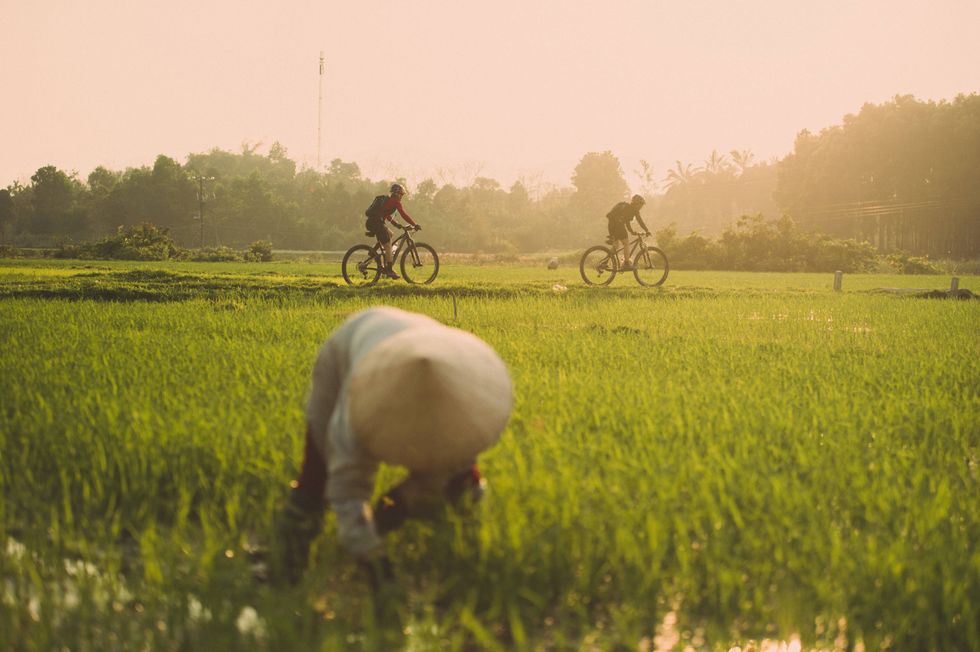 Rebecca Rusch is no stranger to grueling endurance challenges. That’s why the seven-time world champion mountain biker is known as the “Queen of Pain.” So the idea of riding 1,200 miles on the Ho Chi Minh Trail through Vietnam, Laos, and Cambodia — much of it unmapped and unridden — seemed a fitting journey.

Except this wasn’t an adrenaline-fueled adventure. Rusch was on a personal mission over 40 years in the making.

In 1972, Rusch was 3 years old when her father, U.S. Air Force Capt. Steven A. Rusch, and his co-pilot were shot down over Laos during the Vietnam War. It wasn’t until 2007 that a search-and-recovery mission finally discovered her father’s remains.

In 2015, Rusch set off on the tangled network of roads and trails in search of the plane’s crash site. She was joined by Vietnamese biking champion Huyen Nguyen. Together, they witnessed how the war affected — and continues to affect — the people in area. Their journey was captured in the documentary “Blood Road.”

I spoke with Rusch about why this was the most important ride of her life.

For 30 years, your family didn’t know what happened to your father. Growing up, what did you think happened?

I was a kid. I didn’t know how to process it. I didn’t have any memories [of him], so it was hard to miss something I didn’t know. All I knew was a single mother and my sister. As I got older, I wondered if he was still alive, had a Lao family, and had forgotten about us. I had a fantasy that I’d meet him one day and tell him what I’ve done, and he’d be proud of me. Looking back, I can see it was my way of missing him.

The film features letters your dad sent home from the war. When did your mom share these with you?

I saw them for the first time because of this film, in late 2014. She waited for us to ask about them. Honestly, I didn’t know letters existed.

This has been a unique process for my living family. If we weren’t doing this film, a lot of stuff would have remained unearthed. This whole trip and riding to the crash site has been an unexpected opening for me, a chance to get to know him.

When your dad’s remains were discovered at the crash site, how did you feel?

It was a relief to know he wasn’t a prisoner of war. He didn’t suffer. For me, that was closure.

What was the hardest part of the ride?

This was the longest, most complicated expedition of my life. Just mapping the route took so much research and collaboration. The skills I needed to draw from on this ride were a culmination of 30 years of experience as an athlete — navigational skills, expedition planning, logistical knowledge, teamwork, physical training for cycling, kayaking, even rock climbing, international travel. You name it. I needed it all for this trip. But the hardest part was being vulnerable and letting the trip unfold without having control of it.

Was it important to do the journey on your bike?

Looking back, I can see that it was important to ride the whole distance in order to strip away my defense layers. As a pro athlete and independent woman, I’m supposed to be strong and unbreakable. Being emotional is not my forte. I’m trained to put fear and insecurity aside and charge forward. If I wasn’t physically tired, I wouldn’t have been open to see the gifts the trail was giving me.

Toward the end, I felt a lightness, happiness, and stillness I’ve never felt while riding my bike. I was still moving the pedals, but I was free. I was completely at peace in the moment without having to strive for the next accomplishment. Looking for him at the crash site was really about finding out and understanding who I am and what is important to me.

Rusch and Huyen in the countryside. Photo by Josh Letchworth/Red Bull Content Pool.

Why was it important for Huyen ride with you?

She taught me to slow down, which allowed me to change focus from just me, look beyond my mission and open my eyes to the bigger world around me. This change in pace and perspective allowed me to experience the ride in a much more complete way. She would tell me how rice is planted and harvested and that the people we were riding by were probably laughing because they couldn’t believe that two women are out riding in the countryside by themselves. She would share stories about what her family went through during the war. She was so compassionate, intuitive, and supportive of my mission that we ended up becoming like sisters. We are now bonded for life from this experience.

What did you learn from the Lao villagers you met?

I appreciated how they can live in the moment and forgive. What happened 40 years ago is relevant today because there are still unexploded bombs, but they don’t harbor blame. They were so willing to help me find someone who was bombing them. If someone bombed my family’s house and 40 years later, their daughter came, would I instantly open the door to them? It’s a lesson in forgiveness.

The images of the bomb craters pocketing the landscape are powerful. What was your reaction to seeing them?

I felt ashamed and embarrassed. I felt sorry for the American solders and the conflict they must have felt dropping those bombs. My dad talked about it in his letters. It made me feel sad for both sides. I felt like my dad brought me there for a reason, like he’s fathering me even in his death. I came away excited because I have a new purpose for my riding. I can use my bike and my reach for change. This problem [of unexploded bombs] is big, but I can do something. It’s instructions from my dad.

[An estimated 60,000 people have been injured or killed in Vietnam and Laos from unexploded bombs. At the current pace of removal, it will take more than 100 years before all the bombs have been successfully cleared from the region.]

Your dad signed his letters “Be Good.” What does the phrase mean to you?

In Laos, you’ve partnered with Mines Advisory Group (MAG), which clears unexploded bombs from the land, and Article 22 to create “Be Good” bracelets using bomb scrap metal. What’s next?

I’m going to Laos in August to embed with a MAG team and watch them gather and detonate bombs. Then, I’ll ride to the village where artisans make the bracelets. I’ll plan another mountain bike trip on the Ho Chi Minh Trail, probably one trip a year. We’re showing the film in Laos and hopefully in Vietnam in Huyen’s town. I’m trying to get the film on Capitol Hill. There are many layers I haven’t uncovered yet.

What do you want people to take away from the film?

It’s two things wrapped together. Forgiveness, but that only comes from getting to know a person, situation, culture, or yourself.