The Sport That Changed Me: OITNB’s Alysia Reiner On Spinning Through Life 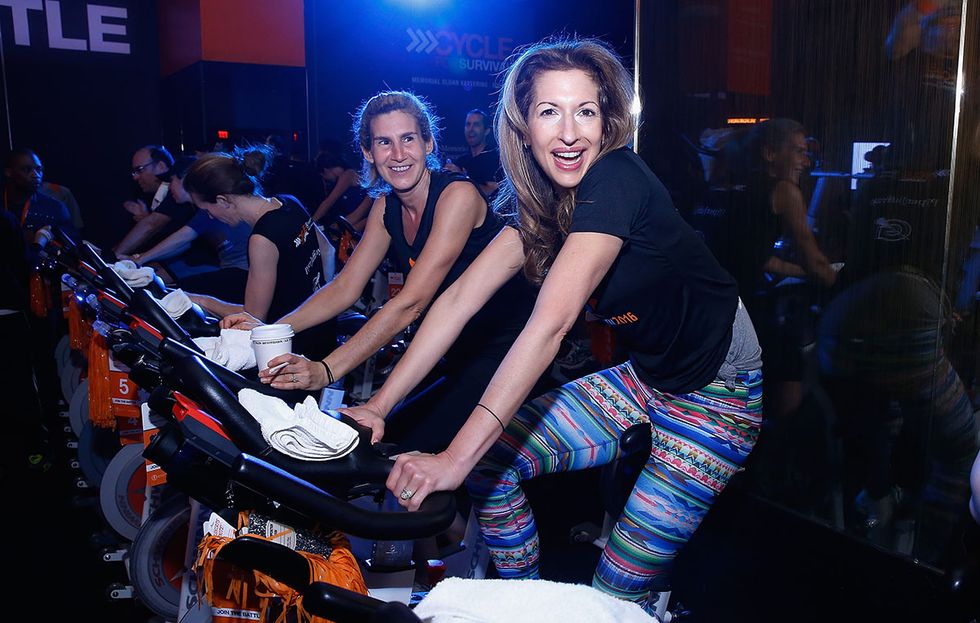 For actress/producer Alysia Reiner, perhaps best known for her role as Natalie Figueroa on the Netflix hit Orange is the New Black, daily exercise serves as a source of inspiration and fulfillment. Her relationship to exercise was very different in her teens, however. Reiner chatted with GOOD Sports about how she came to embrace working out, and how keeping active, well, keeps her active while pursuing her passions.

As a kid I was not as active at all. I was paralyzed by my self-consciousness, I was painfully shy. I was the fat girl and I was really teased for that. I hated gym as a kid, like hate, hate, hate. It was the diametric opposite of my truth today. I would get doctor’s notes and do anything to get out of it.

Then I found exercise in a not-healthy way in my teens as a way to control my body and as a form of self-flagellation. It had been about being skinny and getting approval. When I was 19, I found out I had a tumor. It was a big wake-up about my body and soul. From then on I made a commitment to make exercise about joy, health, fun, solace, and change—and that’s what it became.

Now, exercise and moving my body is my antidepressant—it is my drug of choice. I’m happy (due to) endorphins. It is my place of joy. It’s my place of solace. I come up with some of my best ideas when I’m working out. It’s like a place where I really relax my brain. I pretty much will only do a workout if I find joy in it. We have a trampoline, I do SoulCycle, I love yoga—I have to really love what I’m doing.

Working out also provides daily structure, and for an artist that is so important in the face of so much unknown in my employment—something artists know but more and more of America clearly feels. Working out gives me a sense of stability in that way.

I love what Cycle for Survival does! They’ve raised as a whole over $100 million. Personally, I think David (husband David Alan Basche) and I raised over $10K last year. It’s such a wonderful example of the way you can use sport for good. I have a lot of friends that run marathons in similar ways. It’s a great way—not only to raise money, but also raise awareness, encouragement, and excitement.

I lost my dad to cancer. He’s no longer in a human body and, hence, cannot use his body in that way. It makes me so deeply grateful for my body and the ability to do what I can do on a daily basis.

The election—it’s a call to action. I’m talking to SoulCycle about doing a ride for a charity that has been especially hit by the election, such as a Planned Parenthood. Additionally I have a friend who is a jewelry designer, and I said to her, “I would love to collaborate in some way for the holiday season so that when people buy some of my favorite jewelry, some of the proceeds go to a charity.”

We decided on a charity called KIND (Kids in Need of Defense), which focuses on kids who have come in from a different country, but have not immigrated yet and are in grave danger. KIND provides them with a way through immigration. They provide them with an immigration lawyer, pro bono, they help them get the services they need, they help them get into a school system. It’s a great, great charity.

I’m also planning on going to the Million Women March (the Women’s March on Washington). Also, I’ve done Celebrity Skifest. It’s put on by Waterkeeper (Alliance) and it’s really cool. Celebrities like me ski and compete and look really silly, and we raise a lot of money for clean water.

My workout: I do SoulCycle, I do cross training/boot camp-type stuff. I do kickboxing—I love boxing. I do my trampoline, which brings me outrageous joy. I do yoga, skiing. Patricia Moreno’s workout is great. I love, love, love doing as many different things as possible.