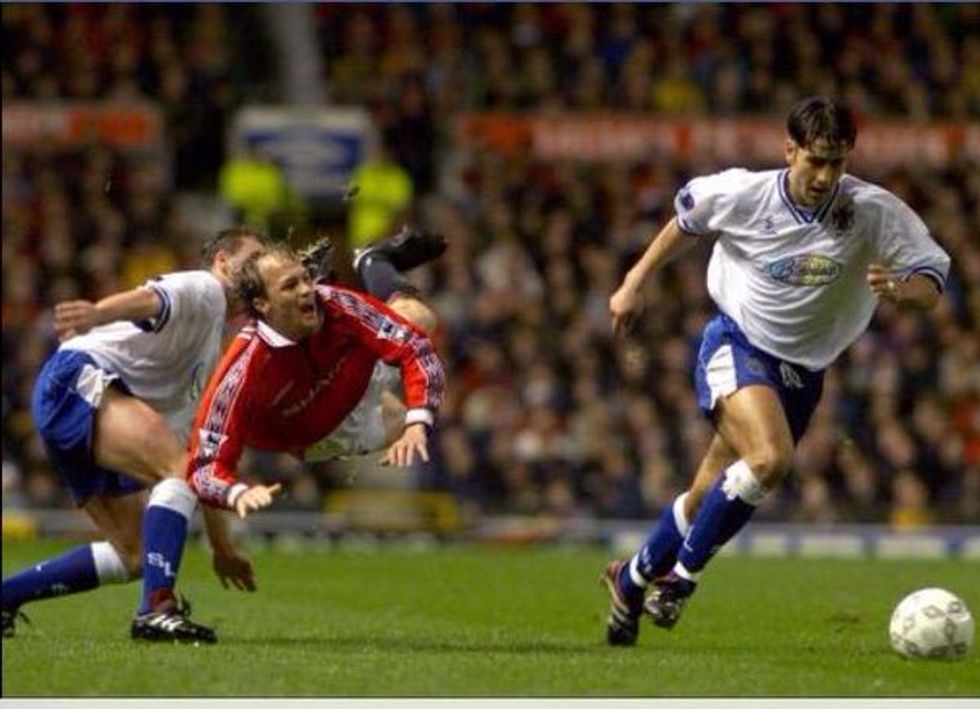 Andy Woodward (right) talked publicly about being a victim of abuse. (Image via Twitter)

Professional soccer players, including the former Crewe Alexandra player Andy Woodward, have been speaking out recently about their experiences of sexual abuse as children. They include alleged victims of soccer coach Barry Bennell, who was sentenced to nine years in prison in 1998, and are waiving their right to anonymity.

The UK’s National Society for the Prevention of Cruelty to Children (NPSCC) said a special hotline, set up after four professional soccer players spoke out about their abuse, received more than 50 calls in its first two hours.

These developments follow the conviction in March 2016 of former Sunderland player Adam Johnson, found guilty of grooming and sexual activity with a 15-year-old girl.

Sports, such as soccer, can be an ideal environment for trusting relationships between coaches and athletes to be developed—and exploited. Research has highlighted the “grooming process” in sport, in which a coach could abuse their position of authority to gradually erode the personal boundaries between athletes to subject them to sexual abuse.

Some coaches abuse their power

A large amount of power is invested in a sports coach. They can impose their version of reality on athletes. In this context, perpetrators of abuse can isolate victims from potential sources of support within that reality by controlling the psychological environment. This can be through direct emotional manipulation, psychological abuse, and the creation of a highly volatile, psychologically abusive training environment.

A recent study I worked on with Andrew Sparkes at Leeds Beckett University, focused on the story of “Bella”—not her real name—a female athlete, who was groomed and then sexually abused by her male coach. We drew on previous research to explore three main types of harrassing coaches:

Bella’s coach was able to shift between the personae and tactics of the different coaches in order to groom her and have “power over” and own her for many years.

While sexual abuse exists in many different sports, soccer embraces masculine characteristics which act like a cult—a subculture adhering to its own list of commandments situated in a type of “jock culture”. In the past, the commonly accepted ethos of “suffer in silence” and the traditional belief that children’s voices should not be heard, could too easily be used to disguise sexually abusive behaviors.

Often athletes believe that the “jock culture” of which they are a part takes precedence over any other authoritative structures outside their sporting world—a bubble which can cut them off from external support.

Men’s soccer, in particular, provides a platform to global celebrity, bloated salaries, corporate sponsorship, and fan adulation that can catapult male players to fame and fortune. Soccer coaches, similar to other positions of power, are the gatekeepers to this dream and this status comes with power that has the potential to be abused.

This power is reinforced when they are found to have committed serious violent or sexual offenses—but not punished. Evidence from the NFL regarding violence against women suggests that sportspeople are less likely to be “punished by the leagues, teams, or criminal justice system as harshly or consistently as their general public counterparts”.

Just sat in bed reflecting on the past week. Words can never say how thankful I am for all your support. This momentum WILL save people.
— Andy Woodward (@Andy Woodward)1479975954.0

The overwhelmingly high value placed on men’s sport, specifically men’s soccer in the UK, might mean that abusers think they can get away with abusive behaviors which might include sexual or child abuse. Many victims are made to believe by the perpetrator that they were the only one who was abused—that they were “special” and would not be believed if they came forward. It can also be extremely difficult for men to admit to being a victim. Speaking out about abuse means breaking codes of masculinity and camaraderie that are closely tied to sporting identity.

While it is important for people to tell their stories, we need to be careful that the news does not create moral panic which leads to a culture of fear around coaches as “dangerous individuals.” While the players who have spoken out are very courageous, it’s important not to cast suspicion on all coaches.

Many of the effects of abuse on victims—such as drink and drug abuse, depression, suicidal feelings, and sexual disturbance—are misunderstood. The culture of silence surrounding sexual abuse in sport can perpetuate feelings of isolation for victims of abuse. Speaking out about their abuse enables victims, bystanders, and other sportspeople to become whistleblowers who challenge the culture of silence that seems to exist in soccer and other sports about this kind of abuse. After all, the shame lies completely with the abuser, not with the abused.

The four players speaking out continues to have a positive impact, as the NPSCC says the hotline for players who have been victims of sexual abuse received more than 800 calls in its first week. The hotline is available 24 hours per day. The UK number is 0800 023 2642.