Honoring the Dead By Feeding Them 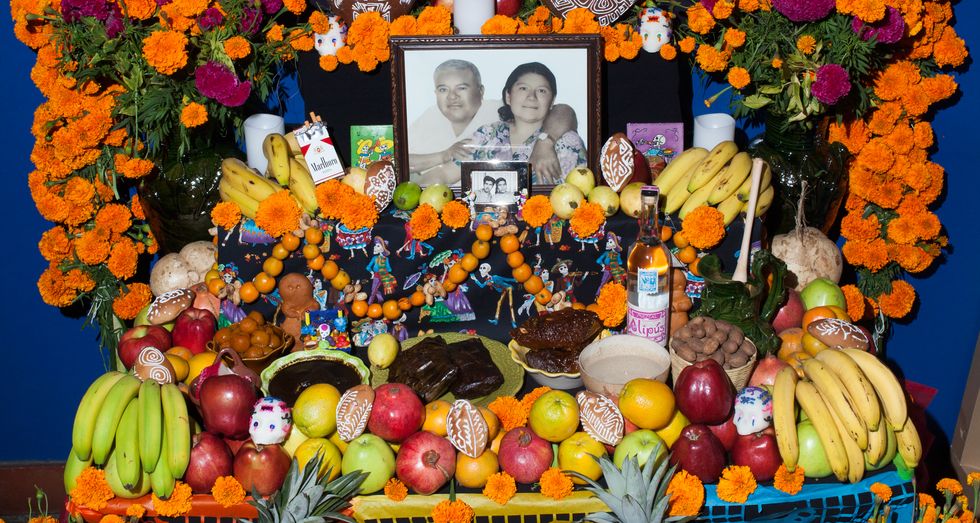 You may not have noticed, but the elaborate Día de los Muertos altars that pop up this time of year are full of really good-looking (and presumably good-tasting) food. They’re loaded with freshly baked pan de muerto (an anise-and-cinnamon-spiced sweet bread baked only at this time of the year—and exclusively for this purpose), platters brimming with things like dark mole made from scratch, and piles of ripe fruit. Not to mention unopened bottles of the beers, wines, and spirits that deceased honorees liked to drink when they were alive.

Food is a vital component to Día de los Muertos. Though the hugely popular Mexican holiday traditionally celebrated on November 2 has its roots in the pre-Hispanic ages (meaning way before the 1500s), things have only intensified with time in Mexico, as well as other Latin American countries and basically anywhere the Mexican diaspora can be found. The holiday has become especially popular in Los Angeles, with its defining Mexican-American population. This year, besides the countless home altars, there are more than 40 public Día de los Muertos events in Los Angeles alone.

Growing up, I visited the beautiful Día de los Muertos altars at the Self Help Graphics & Art Center in East Los Angeles year after year. It was one of the first places in Los Angeles to publicly celebrate the occasion before everyone—from city parks to public cemeteries—started doing it. I remember as a teenager slowly walking around the ornate altars and getting a kick out of seeing the type of foods that were offered to the spirits, since you can tell a lot about a person by what they eat (or rather, ate). Not to mention that the food looked amazing and I kind of wanted to taste it, too. But what would happen if I actually took a bite? Would I be cursed with bad food for seven years?

“Well, it is believed that if you took a bite of any of the foods that are on the altar after Day of the Dead, the food has no flavor anymore because the spirit has already eaten it,” says Maria de Jesus Monterrubio, co-founder of L.A.’s iconic Guelaguetza restaurant. I never sneaked a nibble of the offered food to find out if this was true or not.

Large loaves of pan de muerto baked only at this time of year for Día de los Muertos.

Monterrubio shows me altar photos she snapped back in her hometown of Mitla, Oaxaca, where every house has an altar built into its façade. (Coincidentally, ‘mitla’ is the Nahuatl word for ‘place of the dead.’) The altars are adorned with green banana bunches as chandeliers and tiny Mexican hawthorne apples tied together like popcorn on American Christmas trees. “The essential foods that must be present during any Día de los Muertos in Mitla are pan de muerto, dulce de manzanita (a traditional Oaxacan apple candy), nicuatole (a milk custard gelatinized with toasted corn powder), freshly made chocolate, fruit, mezcal, and anything else that the spirits personally enjoyed eating when they were alive,” she says.

At 9 a.m. sharp on November 2, you lay the food and drinks out on clean or new plates for the spirits to eat as if they are alive, so they can go back to wherever they come from with full stomachs. “You even leave the doors unlocked so the spirits come in as effortlessly as possible; everybody does this,” Monterrubio says. With an air of foreboding she then whispers to me, “And if you don’t make any kind of altar or offering, some people have said they hear and sometimes see their deceased loved ones crying.” No wonder people pimp their altars every single year.

Freshly made Oaxacan Mole Negro (with about 17 ingredients), Tamales Oaxaqueños in banana leaves and candied pumpkin in Mexican piloncillo syrup are some of the deceased loved ones favorite foods.

Any kind of shortcut is frowned upon: You must use only the best, freshest food available. In Oaxaca, that means slaughtering a turkey for the mole and properly toasting cacao beans for the chocolate. For Mexicans in the United States, that may mean buying the same high-quality food that you would eat yourself. Aside from containing costly ingredients, many of the food preparations take serious time and effort. Some altars cost more money than the median income in Mitla. Yet regardless of class, everyone is equally lavish with their offerings.

Here’s what Monterrubio’s mother requested to be served in the afterlife before she passed away: a mug of hot atole blanco (an unsweetened hot milky beverage made with nixtamalized corn and water), a caldo blanco (plain turkey soup cooked in the style of her hometown with plenty of aromatic, licorice-flavored hoja santa herb), and a pile of freshly made corn tortillas.

To this day, Monterrubio continues to serve this combination of foods to her dear mother every Día de los Muertos. Of course, everything is served warm, ready to sip and savor. Love isn’t the only thing that is believed to be eternal. Food is, too.