She won it in a raffle. 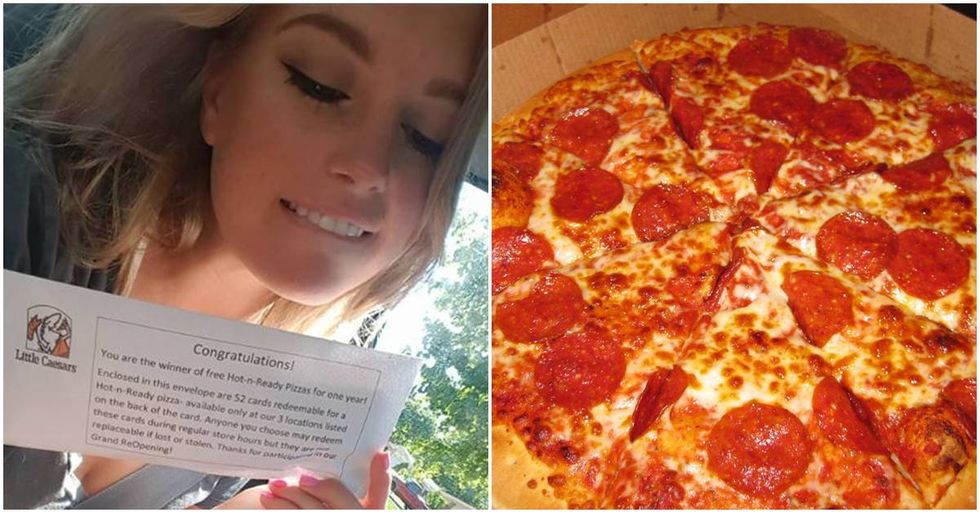 In August 2016, 19-year-old Hannah Spooner of Detroit, Michigan, won one of the greatest prizes a teenager could ever receive — free pizza for a year from a Little Caesars.

After entering a raffle, she was randomly selected to win $500 worth of pizza. Since a large Hot-N-Ready pie is only $5, that amounts to about 100 large pizzas, or 800 slices, over 365 days. But instead of living out 2017 in a pizza-fueled utopia, Spooner decided she would pay it forward and donate her winnings to charity.

“Detroit is going through a lot of negativity,” Spooner told Inside Edition. “I wanted somewhere close to home that would be affected by my donation.” So she and her boyfriend looked into some local charities before finally deciding on giving her winnings to Covenant House Michigan, a shelter for homeless youth ages 18-24.

Carolyn Millard, Covenant House’s development manager, was thrilled with the donation because the kids at her shelter “love” pizza. “They get very excited,” she said.

After hearing the news of Spooner’s generous donation, Little Caesars threw a pizza party at the shelter. The party celebrated the house’s Total Me program which invites students from local colleges to mentor the at-risk youth.

Since her donation, Spooner has gotten a lot of attention for her good deed. “I’m so happy others get to hear our story and make a difference in their communities as well,” she wrote on Facebook. “It’s easy to get overwhelmed in our daily lives and to be consumed with the negativity in the world, I’m hoping that people take a step back and realize what is truly important in life!”