Infographic: With Donations, Corporations Love Japan, Haiti Not as Much

Compared to Haiti, corporations are rushing to donate to Japan, where they have more colleagues and customers. The American people not so much. 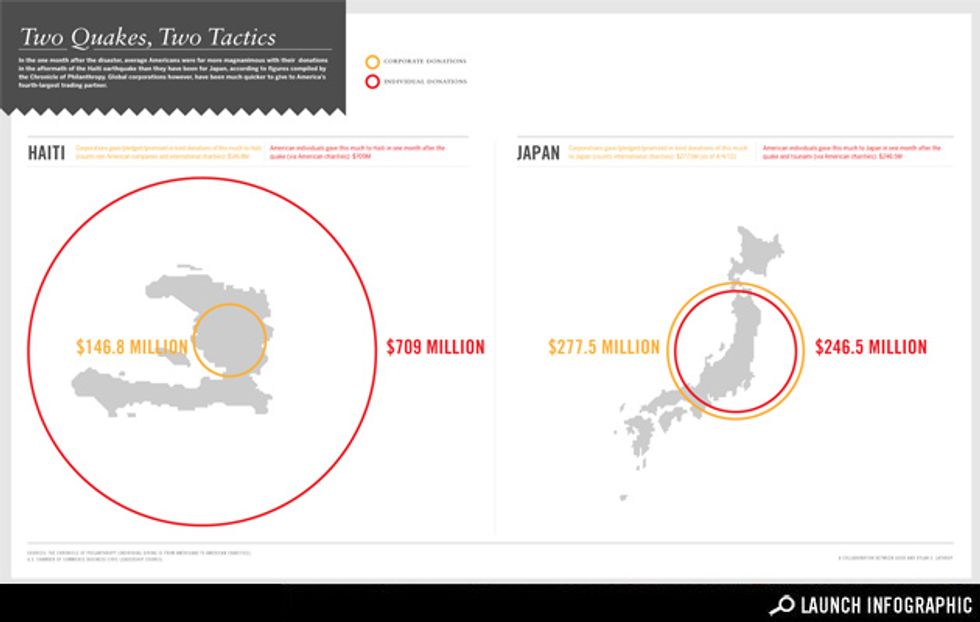 According to a comparison of post disaster donations by the Business and Civic Leadership Center of the U.S. Chamber of Commerce, companies from around the world have donated, pledged, matched, or offered in-kind services of $277.5 million to Japan relief in the first month. That's compared to $146.8 million to Haiti, to date.

So why the difference? There are a few reasons.

The 7.0 quake below Port-au-Prince crumbled most of the city, killed more than 200,000 people and created an immediate and persistent public health and humanitarian emergency that has yet to abate. In Haiti, the human toll was far greater, and more vivid. Responding to the emergency, individual Americans rushed to give, texting in micro amounts to the Red Cross and other disaster relief groups almost instantly. Our hearts pained seeing families hold vigil by piles of crumbled concrete waiting, hoping, for miracles from beneath the jagged slabs.

From Japan, we saw towns swept away by killer waves, and heard about heroic efforts in the dark tunnels of a nuclear plant, but the scenes of personal suffering involved were still less vivid. And while the earthquake and tsunami is being called the most expensive disaster in history because so many expensive, high-tech facilities were damaged, that economic toll didn't motivate the average American to give in the same way.

Businesses however, rushed to give to Japan. They have more connections there, more business partners, suppliers, employees, and yes, customers. It makes sense for companies to give to the communities they deal with. They have a greater connection and a greater stake in recovery where they operate, and they operate more in Japan than in Haiti. The business community responding to the Japan quake also includes companies like Toyota, who are working to increase giving in various ways.

By day three of the Haitian tragedy, Americans had donated $97 million. By day three of the Japanese quake, Americans had donated $24 million, according to figures provided to GOOD by the Chronicle of Philanthropy. A month later, that ratio holds. In one month, American individuals donated $709 million to Haiti, more than the $246 million they've giving so far to Japan, 69 percent of which has gone to one organization, the American Red Cross.