He just won’t let this go, and it’s appearing less and less like a joke. 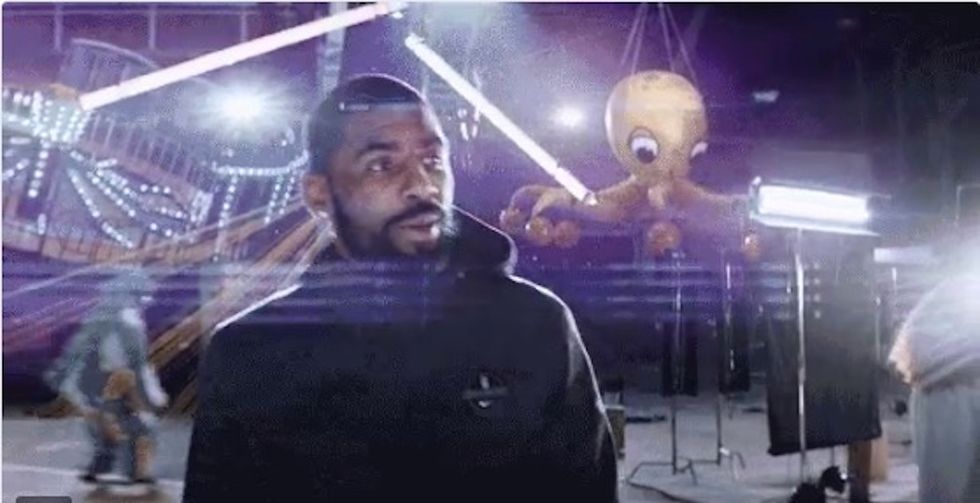 To sports fans, Kyrie Irving is known as one of the league’s premier point guards, having quickly helped elevate the Boston Celtics to dominance just half a season after leaving Cleveland after a well-publicized rift with megastar LeBron James. However, Irving’s also grabbed his share of headlines with his questionable stance on the shape of the Earth.

In what the star has stated was just an opaque way of trolling fans, he went on record saying the Earth was flat, much to the delight of the dozen or so “flat-Earthers” who refuse to believe that the Earth is round.

He may not have science or logic on his side, but Irving still hasn’t let the issue go, joke or not. He has since claimed that he made the outrageous comments in order to get people to “do their own research.”

Now, in a Nike commercial that Irving himself directed, he’s surrounded by “Earths” that spin like flipping coins rather than rotate.

A couple days later, his shoes appeared atop a curious spinning apparatus that, once again, shows a representation of the Earth as a flat two-sided disc.

Irving’s on-court achievements could speak well enough on their own, but for some reason, the NBA star appears resolute in having his name attached to this goofy outlook on the world. Sure, it’s keeping his name in the headlines, but does he really want to be remembered as the terrific basketball player who’s clueless about the shape of his own planet?