A former Marine saw the need for American humanitarian aid. Now, he’s a U.S. Senator fighting for food, and freedom, for all. 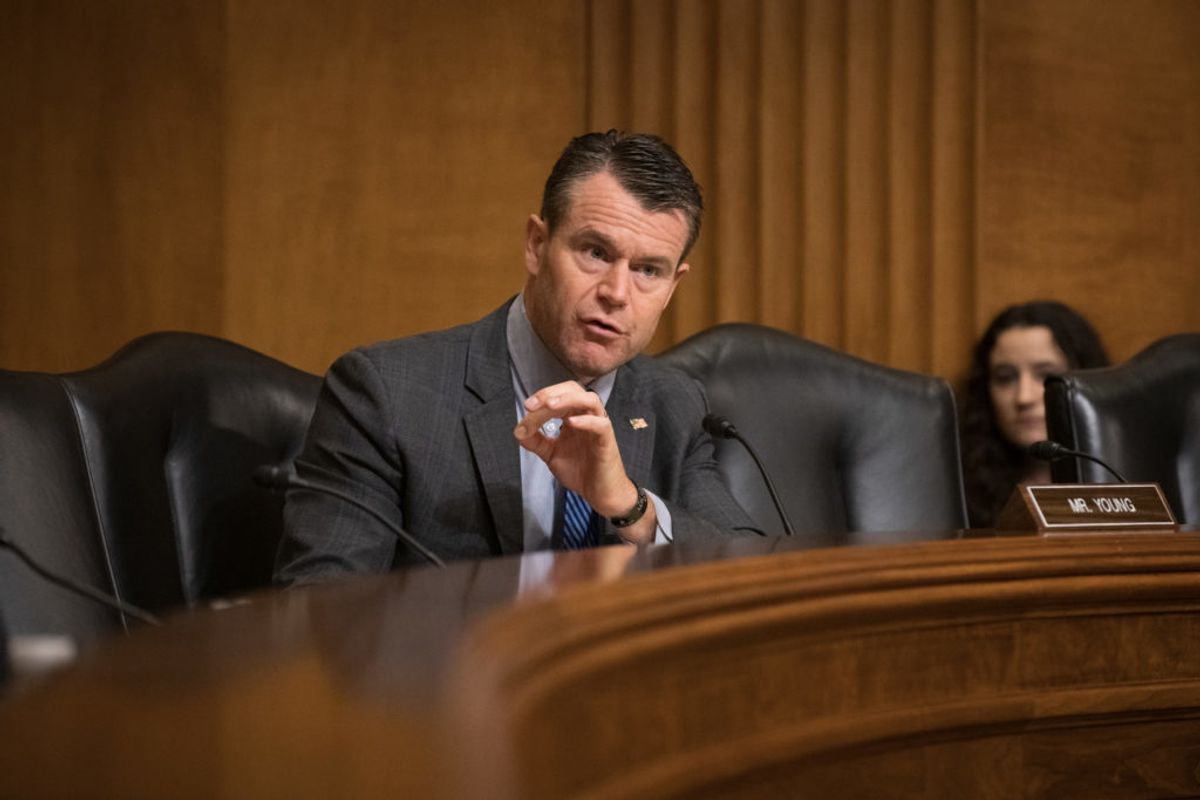 This article was produced by the World Food Program USA, which has an ongoing consulting relationship with GOOD | Upworthy. You can read the original article here.

For decades, American leaders from both sides of the aisle have fought to end global hunger. Senator Todd Young is one of these leaders. From Marine to Congressman to Senator, Senator Young has dedicated his career to ensuring food security for people at home and abroad. We recently sat down with Sen. Young to learn more about his commitment to helping others, the drivers of global hunger and the policies and programs he's promoting to solve it.

WFP USA: Throughout your career in public service, you've been a leader in fighting for global food security. What stemmed your passion for this cause?

Sen. Young: As a Marine Corps officer and a staffer for Senator Richard Lugar, I saw firsthand the necessity and effectiveness of America's helping hand.

As I started my first term in the Senate, I chaired a Senate Foreign Relations Committee hearing on the humanitarian crises in Nigeria, Somalia, South Sudan, and Yemen. Listening to the witnesses speak about the four famines, I realized I had not understood the human cost of the crises confronting the world.

That hearing has made me read, study, and reflect – specifically on these root causes of conflict. After that hearing I not only investigated the humanitarian crises but also asked how I could make a positive difference as a Senator.

Looking at the crises around the world, I became focused on the situation in Yemen for a few reasons:

WFP USA: This past year, you led efforts to ensure safe access for humanitarian aid in Yemen – a country on the brink of famine caused by civil war. Specifically, you demanded that food not be used as a weapon of war. Can you explain how food is used as a weapon of war – not just in Yemen, but in conflicts around the world?

Sen. Young: Despite public outcry and numerous UN Security Council resolutions demanding unfettered humanitarian access, armed actors continue to block the delivery of aid. Whether it be Syria, Burma or Yemen, the delivery of lifesaving aid is either hindered or fully blocked.

In Syria, we saw President Bashar Al-Assad use food as a weapon, allowing humanitarian actors to provide assistance in areas controlled by his regime, but denying lifesaving assistance whenever it crossed into opposition held territory.

In Burma, we have seen the military deny safe access to humanitarian actors and United Nations missions.

In Yemen, the Houthi authorities and the Republic of Yemen government construct bureaucratic hurdles that prevent the delivery of aid to people in need. We also saw Saudi Arabia block access to Yemeni ports.

WFP USA: Why, as an American Senator, has global food security been a priority for you? Other than moral imperative, why should Hoosiers (Indianans) and Americans more generally, care about hunger in a land so far from home?

Sen. Young: Hoosiers, like many Americans, know that global events matter because the consequences – both good and bad – reverberate at home.

They affect our sons and daughters, fathers and mothers who are serving in uniform by contributing to the risk of violence and terrorist acts. They also impact our economy by contributing to global instability which can negatively impact Hoosier producers and consumers.

Global events matter because the consequences – both good and bad – reverberate at home.

Hoosiers expect their elected leaders to fight for the values and rights that we believe to be universal. We also believe that our nation has a moral obligation to engage around the globe to help alleviate the suffering and deliver justice.

More simply, we know that reducing suffering and injustice in places around the globe, is not just the right thing to do but it also makes our nation more secure.

WFP USA: For the past four years, hunger has been on the rise and its number one driver is man-made conflict. How can addressing hunger help to reduce instability around the world?

Sen. Young: The civil war in Yemen is an unmitigated national security and humanitarian disaster. The longer the civil war continues, the more influential Iran and terrorist groups will become in Yemen.

Meanwhile, nearly 16 million people are on the verge of famine. In recent weeks, there has been progress made toward reaching a political settlement, but this progress must continue.

In Yemen, unlike other famines and food shortages around the world, the crisis is completely man-made. Sadly, using food as a weapon of war only pushes more Yemenis toward Iran and its proxies — giving terrorists increasing opportunities to threaten Americans, our partners and our interests. It is essential to America's national security interests and our humanitarian principles that the administration use all available leverage to forge an enduring peace agreement to this conflict.

We have seen the same thing in Iraq during the rise of ISIS. As you know, many Iraqis did not share ISIS's radical ideology but aligning with even terrible terrorist organizations could help ordinary Iraqis to provide food and security for their families.

These are a few examples, but we see the same things in countries across Africa, in Venezuela, and elsewhere. When food and medicines are held for only those with a certain belief or political affiliation, that has a radicalizing effect on the population and a destabilizing effect on the country and the region.

We also see it as the root cause of migration flows when we look at our own southern border and also in Europe. Many of these individuals did not just wake up one day and decide to leave their home countries, but it is often a result of food insecurity or other security concerns that cause these families to take on these risks and move.

While I firmly believe in securing our southern border, I also believe that more must be done to intervene in the lives of those fleeing to create the conditions where they are comfortable and secure in their home countries.

WFP USA: Development assistance is just one tool in America's foreign policy toolbox. As a former Marine, you're intimately aware of our defense capabilities. How can American development, defense and diplomatic actors work together to tackle the problem of hunger around the world?

Sen. Young: We must first hold to our moral principles. We have a moral imperative to help people in dire need of humanitarian assistance. The United States must publicly embrace its role as the world's leader in the humanitarian system that has succeeded for so long.

The United States must reject transactional diplomacy and publicly call out those that seek to barter away our humanitarian principles. We must also voice the importance of humanitarian assistance to our national security interests.

Some critics will assert that we have to choose between our security and our principles. That is a false choice as the two are intrinsically linked.

The President's National Security Strategy rightly demands that development be a strong and equal partner with diplomacy and defense in collective pursuit of a world that promotes peace, security and opportunity for all.

Going beyond that, earlier this year I was proud to serve as a co-chair, along with my colleague Senator Cory Booker, of the Task Force on Humanitarian Access at the Center for Strategic & International Studies (CSIS).

As a part of that Task Force and our report, we found that U.S. security partnerships, designed to strengthen partner military and defense forces, are failing to adequately address the humanitarian impact of military action by partner forces.

We must prioritize advancing long-term stability and security in fragile states, but in order to do so, we must do a better job of balancing the need to meet basic humanitarian needs of vulnerable populations with responding to national security concerns.