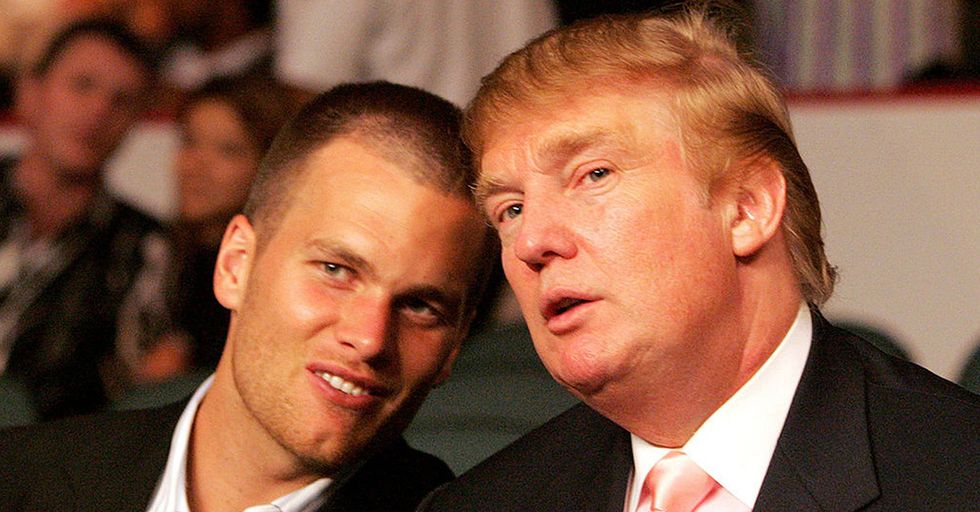 Last night at a rally in New Hampshire, Donald Trump pulled out the time-tested strategy of appealing to voters by playing to their hometown sports allegiances. In this instance, he claimed that Patriots star Tom Brady had already voted for him. He also purported the team’s head coach, Bill Belichick, had written a letter of endorsement which Trump read from the stage.

Trump said to the crowd, convened in Manchester:

This guy is a true champ so he writes, Coach Belichick,

“Congratulations on a tremendous campaign. You have to help with an unbelievable slanted and negative media and have come out beautifully. You have proven to be the ultimate competitor fighter. Your leadership is amazing. I have always had tremendous respect for you for the toughness and perseverance you have displayed over the past year is remarkable. Hopefully tomorrow’s election, the results will give the opportunity to make America great again.

The use of “tremendous,” a staple of Trump’s own lexicon, and Trump’s prominent history of fabricating endorsements from athletes, called into question the veracity of the letter, but it’s sounding like the sentiment and letter from Belichick is real.

CSN New England is confirming that the star coach “did indeed drop a note to Donald Trump on Monday,” and implied that the note Trump read was, in fact, the one Belichick sent.

As for Brady’s (alleged? possible?) endorsement, that saga continues with a little less clarity.

Trump said in the rally that he received a phone call from Brady that the star QB had voted early for the candidate.

But Brady said later yesterday that he hadn’t yet voted (for Trump or otherwise), and when Gisele Bundchen, Tom Brady’s wife, was asked if she and Tom were voting for Trump, she was a little less diplomatic on her Instagram comments:

So there you go. Trump may have (gasp!) oversold the reality of things to make himself look more popular.