Chris Christie Snagged A Foul Ball At The Mets Game, And The Crowd Was Not Happy

The rival team’s announcer got a nice dig on the despised governor too. 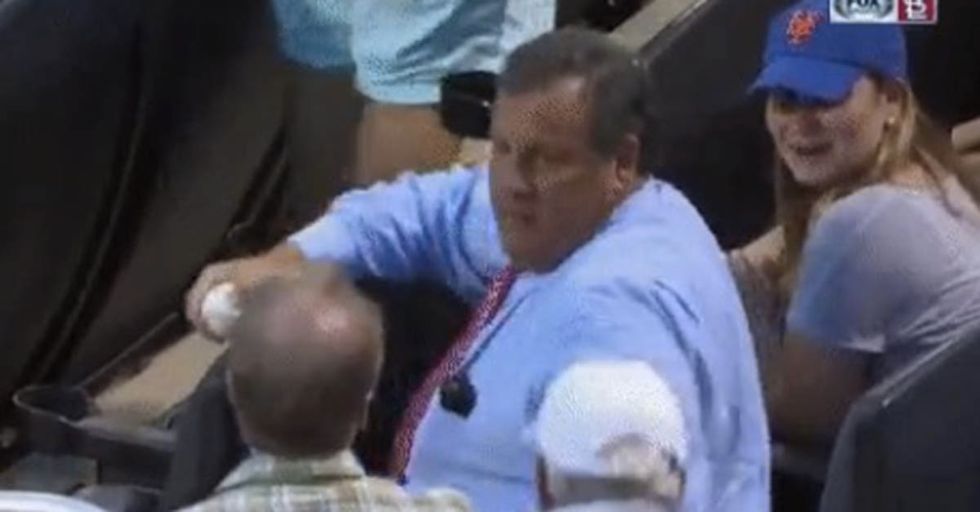 Last week, Governor Chris Christie, amid some historically bad approval ratings, was put on the defensive by an irate caller on a sports radio show. Yesterday, he ventured out to Citi Field to watch a Mets game where he managed to catch a foul ball to a deafening chorus of boos by fans.

Chris Christie caught a foul ball at Citi Field, then got heavily booed and dunked on by a dopey play-by-play guy https://t.co/n2GpN0EEQd
— Chase Woodruff (@Chase Woodruff)1500423033.0

The governor’s public perception has gone from bad to worse following his Fourth of July outing to a public beach he closed over budget concerns, and his vilification didn’t just manifest in the crowd’s reaction but the announcer’s as well.

Cardinals announcer ripping Chris Christie is outstanding. "Nice to see him get from the beach to the ballpark." https://t.co/pzKyGeoJdy
— Joe Giglio (@Joe Giglio)1500429123.0

The governor was nice enough to give the ball to a kid, but not before ruining it with his signature first.

While the man’s politics and personality may leave something to be desired, his appearance was nothing short of a comedic blessing for Twitter.

This is the farthest @GovChristie has ever moved to the left in his life https://t.co/cmoBfbGqL2
— Brendan Prunty (@Brendan Prunty)1500427178.0