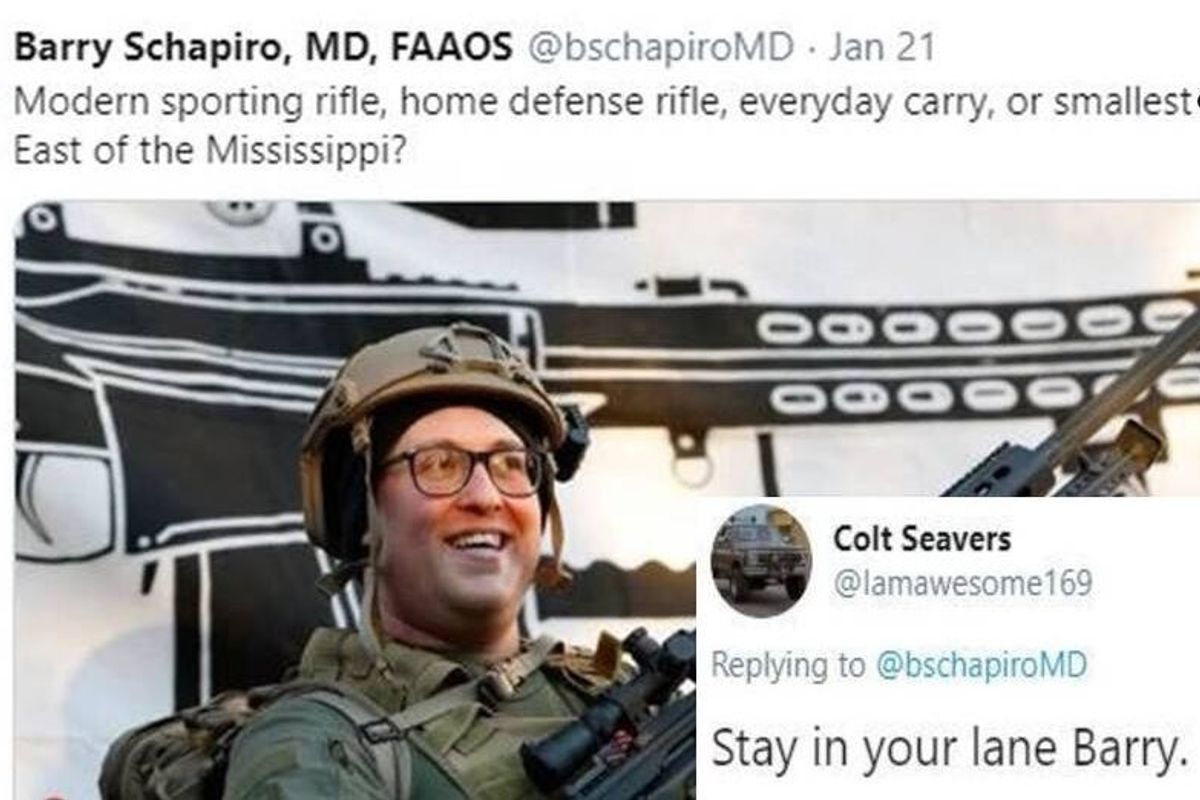 The phrase "stay in your lane" is usually lobbed at celebrities who talk about politics on Twitter by people who disagree with them. People in the sports world will often get a "stick to sports" when they try to have an opinion that lies outside of the field of play.

It's all an attempt to delegitimize someone's opinion that they don't like.

But when it comes to political issues that affect us all, we should all have the ability to speak out. That's what living in a Democracy is all about.

A Twitter user by the name of Colt Seavers got owned on Twitter after he told the wrong person to "stay in your lane" in a tweet thread about guns. He got burned so badly, the tweet trended on r/MurderedByWords on Reddit.

It all began when Dr. Barry Schapiro, a gun violence prevention advocate, tweeted the photo of a man armed to the teeth at a pro-gun rally in Richmond, Virginia. Dr. Schapiro mocked the guy in the photo saying he was overcompensating for his manhood by holding a massive assault rifle.

The picture was taken on Monday when thousands of activists descended on Capitol Square to protest a "red flag" law that would allow authorities to take guns away from those deemed dangerous to themselves or others.

Seavers responded to the tweet with "Stay in your lane Barry."

To which Dr. Schapiro pulled out his Leonardo DiCaprio in "Once Upon a Time … in Hollywood '' flamethrower and roasted him with the response.

Dr. Schapiro is a board-certified Orthopedic Surgeon, that has performed surgeries on gun violence victims. His daughter was a student at Marjory Stoneman Douglas High School in Parkland, Florida when a gunman killed 17 people.

Schapiro's daughter hid in a closet for three hours to protect herself during the massacre and its aftermath.

Oh yeah, Schapiro also has a concealed carry permit and is a gun owner. So this topic couldn't be more in his "lane."

After Schapiro's brilliant burn, Twitter brought out the body bag.

After the burn, the conversation continued and Schapiro ended it with another flame-broiled gun nut.

Hey Thomas, let me explain how stupid that comparison is.

In the end, gun violence is an issue we should all be able to discuss because it affects all of us personally. In a country with nearly 400 million firearms, each of us in real danger of being shot. So we have the right to protect ourselves and loved ones by advocating for laws that can diminish the chances of it happening.

From Your Site Articles
Related Articles Around the Web
parkland dad
Trending Topics
THE DAILY GOOD
Start your day with something GOOD.
Trending Stories