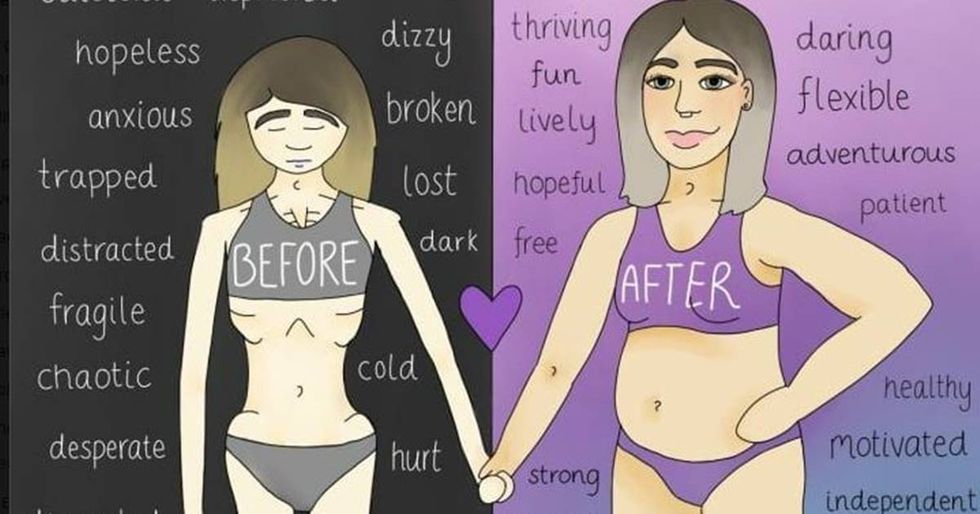 Art is not only a wonderful tool for self-expression, it’s one of the most therapeutic outlets we have. During challenging times, art can help us channel our grief into positive expressions to help us to heal or simply get through the day. For 24-year-old, Sydney illustrator, Christie Begnell, art has helped her combat a dangerous eating disorder.

Begnell first noticed symptoms of an eating disorder after her life fell in disarray. Troubles in her family, work, and school lives were confounded by a painful breakup. “With my world falling apart, suicidal thoughts and self-hatred were at their peak,” she told BuzzFeed. “I had started dieting after gaining a bit of breakup weight but it very quickly became an obsession.” Begnell checked into a private clinic for her eating disorder where she found solace in illustrating her struggles.

In her illustrations, Begnell’s eating disorder is personified by a character known as Anna. The name comes from a term anorexics on web forums commonly use to refer to their disorders. Recently, Begnell collected her illustrations in a book called, “Me and My ED.” Its goal is to help readers gain insight into what it’s like to live with an eating disorder. “I want to keep educating people and I want to keep helping people feel less alone,” she told Buzzfeed. “At the moment I’m just taking it all day by day and seizing every opportunity that comes my way.”