Humans could be next 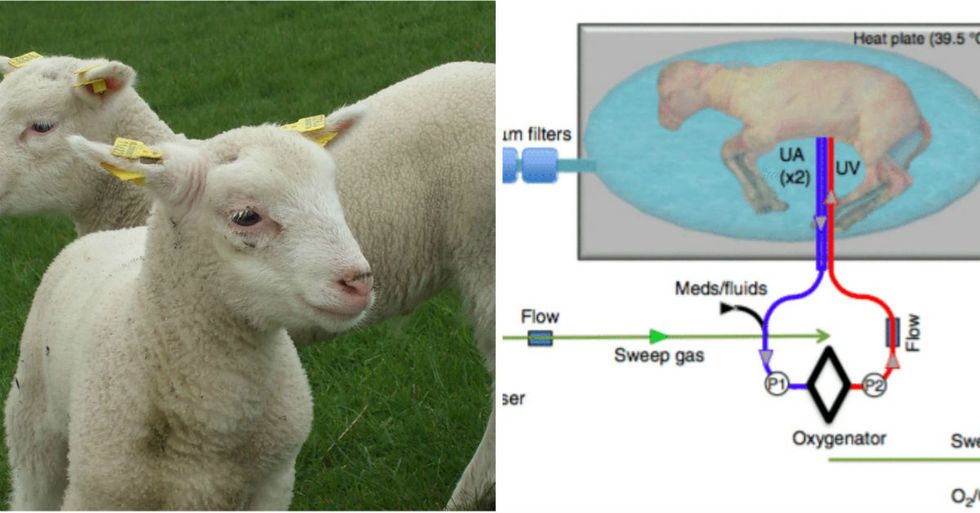 An incredible new scientific experiment successfully took unborn lambs and grew each of them inside an artificial womb called a biobag. Over the four-week process, the lambs could be seen on camera moving in ways that replicated the growth process of babies inside a human mother’s womb.

Researchers at the Children’s Hospital of Philadelphia created the artificial womb, which basically looks like a giant Ziploc bag with filled with clear fluid. The environment of each artificial womb allowed all of the lamb fetuses to survive and thrive.

“I’m still blown away, whenever I’m down looking at our lambs,” Children’s Hospital fetal surgeon Alan Flake told reporters. “I think it’s just an amazing thing to sit there and watch the fetus on this support acting like it normally acts in the womb.”

You can watch a video of one of the lambs moving inside the biobag here.

Lambs were used because of their close genetic proximity to humans. While all eight lambs survived the incubation process, seven were then euthanized so they could be studied. However, one had grown so much it was considered viable and remains alive today.

The researchers say the experiment offers great promise for replicating the process with human fetuses, with tests likely to begin within three to five years.

Now, before you start thinking this is one of those infamous scenes from The Matrix come to life, it’s important to understand that these lambs were not conceived inside artificial wombs.

“I don’t want this to be visualized as fetuses hanging on the wall in bags,” Dr. Flake said.

Rather, they were removed from their mother’s wombs and placed inside the artificial incubators. The idea is that such artificial wombs could one day soon be used to save human fetuses that would not otherwise survive premature births. Neonatal intensive care units around the world already do an incredible job of saving the lives of premature babies. However, those that are born before 26 weeks only have a survival rate of around 50 percent.

But the artificial womb could help revolutionize the process and extend human viability for babies that are not able to remain inside a human womb for whatever reason.