Can positivity be “toxic”? 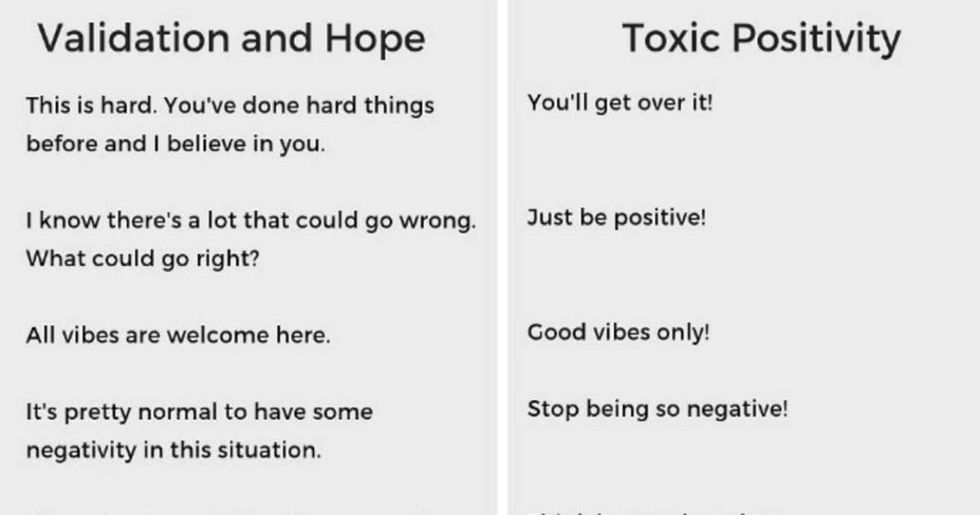 A Helpful Chart to Explain the Difference Between Support and 'Toxic Positivity" was originally published on The Mighty.

There's no denying that positivity can be powerful. I know when I'm struggling with anxiety and negative thoughts, if I can hold onto an ounce of hope — that I'll make it through, that I'm not defined by my thoughts, that I'm not as bad as my brain is making me out to be — I can cope a little better. The positivity we hold within ourselves, when we can manage it, makes it a little easier to get by.

That being said, perhaps counterintuitively, positivity isn't always the best way to help others. You can't make someone be positive. You can't sprinkle positivity dust on them and make their problems go away. And honestly, when people are seeking help and support, they're usually not looking for straight-up, inspirational poster positivity. More often, they're looking for validation that their negative feelings are OK.

I've always kind of known this but didn't think about it in a tangible way until I saw a graphic made by Whitney Hawkins Goodman, LMFT, owner of The Collaborative Counseling Center. She runs the Instagram account @sitwithwhit, and after she posted an image explaining “Toxic Positivity," I started seeing it all over social media.

The graphic shows the difference between supporting someone with validation and hope, and trying to support them with “toxic positivity." According to Whitney, it's the difference between, “This is hard… I believe in you," and, “Just be happy!" If you could never pinpoint why simple “inspiring" quotes didn't sit well with you, this could be the explanation.

It reminds me of a popular animated video about empathy, which uses the words of Brené Brown. If sympathy is shouting down at someone while they're stuck in a hole, empathy is getting into the hole with them. If “toxic positivity" is telling someone to just “look at the bright side," support is putting yourself in someone's shoes, and accepting their feelings for what they are.

Of course, when we throw around phrases like, “Think positive," or, “Stop being so negative," we're probably coming from a good place. You're spreading these messages because you want people to be happier, damn it! So what's wrong with reminding people to be positive?

The hard-to-face truth is, supporting people isn't about being “positive." In fact, when you force positivity down someone's throat, it can actually have the opposite effect. “Toxic positivity" can make people feel unsafe expressing their negativity, and negativity thrives in isolation. It can make people think there's something wrong with them for not simply “choosing" happiness, and shame is negativity's enabling best friend.

When we're supporting someone who's hurting, we need to leave room for positivity to grow. And you don't yell at a flower to “just" grow — you water it. In this case, you water it with listening, with validation, and with unconditional support. It's OK to experience negative emotions, and with support, we can help people who are stuck in negativity find their own way out. Simply telling them to “be positive" doesn't cut it.