These Girls Thought Their Dress Code Was Ridiculous. So, They Taught Their School A Lesson.

Have shorts ever prevented you from learning algebra? 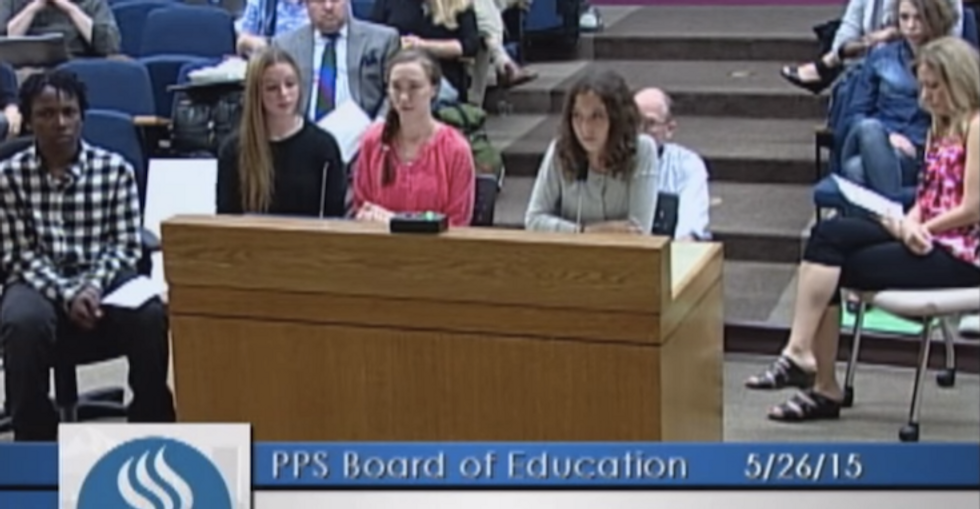 When four Portland middle-schoolers felt their school’s dress code was unfair, they didn’t complain about it in secret or give up and get in line — they took action and launched a powerful discussion.

Upworthy shared a story from a seventh-grader named AnaLuiza, whose friend was pulled aside by a teacher for wearing a too-short skirt. While waiting for disciplinary measures, AnaLuiza’s friend missed hours of class and was left feeling “humiliated.” Outraged by the school’s lack of compassion and blind adherence to what she saw as outdated rules, AnaLuiza decided to do something about her school’s policies.

[quote position="right" is_quote="true"]The only reason I go to school is to get my education. [/quote]

In a meeting with Portland school board that took place in May 2016, AnaLuiza said, “The only reason I go to school is to get my education. When I get dressed in the morning, my intention is not to provoke or be sexualized. My intention is to feel comfortable in my own skin.”

This wouldn’t be the first time a school has shamed students for their apparel. In August 2015, students protested when one Illinois high school punished girls for exposing their shoulders, while in Kentucky, administrators sent one young woman home for wearing a shirt and cardigan that slightly exposed her collarbone. Not every student who violates a dress code is sent home, however; some are asked to cover up with oversized shirts or sweatpants that one Florida mother has deemed “shame suits.”

AnaLuiza’s classmate Sophia told the board that, at least in her school, the majority of students receiving dress code violations are female, pointing to innate inequalities. “My problem with the dress code is that 100% of the students that get sent home are female,” she said. “In a way, you’re telling [a girl] that boys are more entitled to their education than she is. And I don't think that's acceptable.”

[quote position="left" is_quote="true"]100% of the students that get sent home are female… You’re telling [a girl] that boys are more entitled to their education than she is.[/quote]

Damn straight, Sophia. Strict dress codes that mainly apply to girl’s clothing not only distract from a school’s primary purpose — to educate young minds — but also inadvertently reinforce the sexualization of young girls. By placing the burden on young female students to avoid “tantalizing” their male counterparts with their clothes, these dress codes may perpetuate rape culture, as reporter Laura Bates pointed out in Time magazine in May 2015:

“When a girl is taken out of class on a hot day for wearing a strappy top, because she is ‘distracting’ her male classmates, his education is prioritized over hers. When a school takes the decision to police female students’ bodies while turning a blind eye to boys’ behavior, it sets up a lifelong assumption that sexual violence is inevitable and victims are partially responsible. Students are being groomed to perpetuate the rape culture narrative that sits at the very heart of our society’s sexual violence crisis. It matters very much indeed.”

Thanks to AnaLuiza, her friends, and the committee that formed to combat the issue, Portland’s public schools now have a more reasonable, gender-neutral dress code that will hopefully result in fewer violations and missed class time.