Throughout much of the last century, a lethal and terrifying virus besieged America. Then, as now, the fear of contagion gripped ordinary Americans. And then — unlike now — a president displayed decisive leadership in fighting the virus, maintaining an unfailingly good humor and leaving the immunology to the experts.

The scourge was infantile paralysis, or polio, and the president, Franklin Delano Roosevelt, was its most famous victim. First clinically described in the late 19th century and persisting deep into the 20th century, the virus invaded the nervous system and destroyed the nerve cells that stimulate muscle fibers, resulting in irreversible paralysis and sometimes death.

The tally in heartbreak and death was staggering. In "Polio: An American Story," the historian David M. Oshinsky chronicles the loss. In 1949, of the 428 cases recorded during an outbreak in San Angela, Texas, 84 victims — most of them children — were left paralyzed and 28 died.

In 1946, there were 25,000 reported cases across the country. By 1952, the figure had jumped to 58,000. Unlike the Spanish flu, whose special horror was to strike down the healthy in the prime of life, and COVID-19, which places the elderly at greatest risk, polio targeted children mainly, crippling and killing with what seemed an almost premeditated malice.

Always on the alert for symptoms, generations of parents felt a chill of their own when a child contracted a cold, complained of a headache or had a stiff neck. 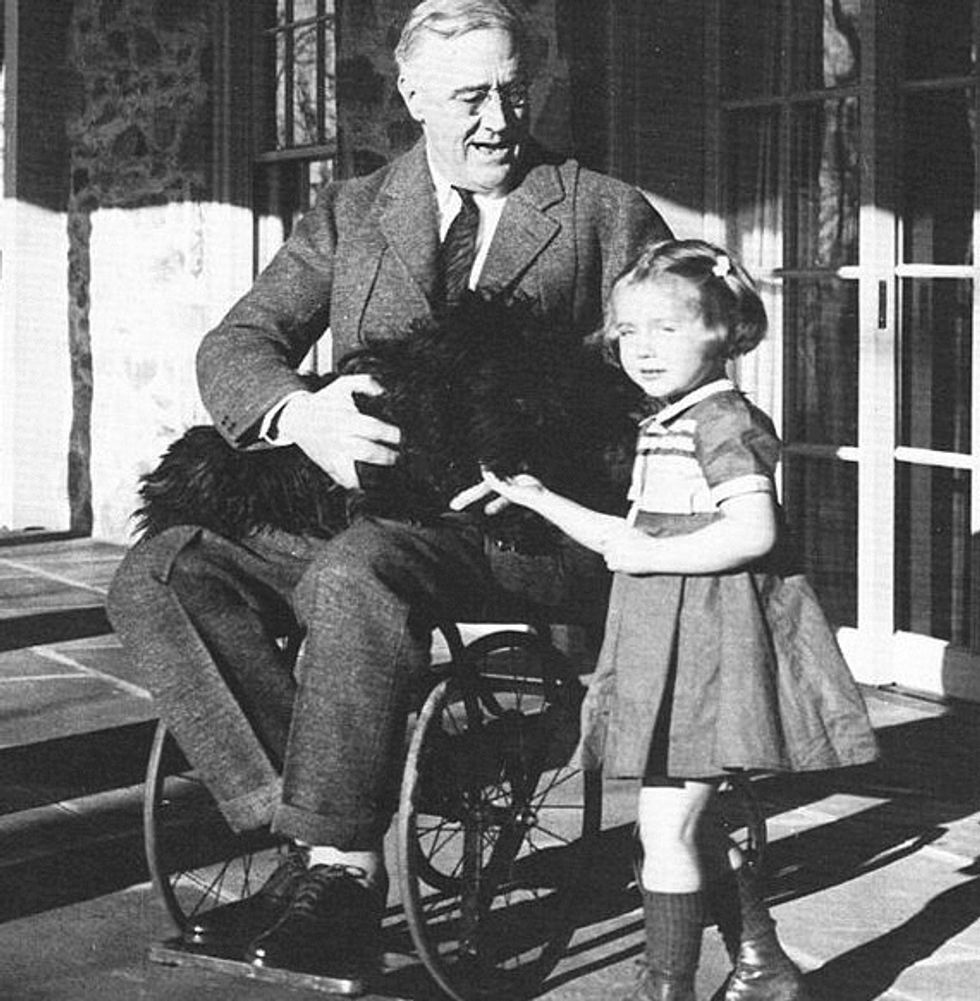 In this sense, FDR was both a statistical anomaly and cautionary lesson. He was stricken with the disease in 1921, at the age of 39, grim proof that wealth and privilege granted no immunity.

Against long odds, he was elected governor of New York in 1928 and, in 1932, to the first of four terms as president. During his first presidential campaign, Republicans whispered that a wheelchair-bound "cripple" was unfit for the duties of the presidency.

"It is perfectly evident that you don't have to be an acrobat to be president," snarled Al Smith, the former New York governor.

As president, FDR made the eradication of polio his personal business. For media historians like myself, FDR has always been a towering figure for his prescient orchestration of electronic media — in this case, the radio — to forge his persona and further his policies.

"My friends," he would begin intimately, in his calming, conversational "fireside chats." Less well known perhaps is his pioneering role as executive producer of a programming evergreen: the celebrity-driven fundraiser.

Beginning in 1934, he dedicated his birthday, Jan. 30, to a nationwide series of charity galas and "birthday balls" held to benefit the Warm Springs Foundation for Infantile Paralysis, named for the polio treatment site in Georgia he had been visiting since 1924.

First Lady Eleanor Roosevelt — not just FDR's strong right arm but his legs as well — typically took on hostess duties, circulating among the guests and hustling back and forth among ballrooms around the capital.

And what swell parties they were. The 1937 bash attracted 15,000 donors and lookie-loos angling to get a glimpse of the main attractions, Metro-Goldwyn-Mayer stars Jean Harlow and Robert Taylor. FDR called the money raised from the annual events his "finest birthday presents," but he was not loath to accept other party favors.

"Surround me with pretty girls at the luncheon," he instructed the organizers of the 1941 celebration — and he was seated between Lana Turner and Maureen O'Hara, as a bemused article in Variety magazine recalled in 1945.

In 1937, FDR announced the establishment of a new charity created expressly "to lead, direct and unify the fight on every phase of this sickness." It was called the National Foundation for Infantile Paralysis, but everyone knew it as the March of Dimes. 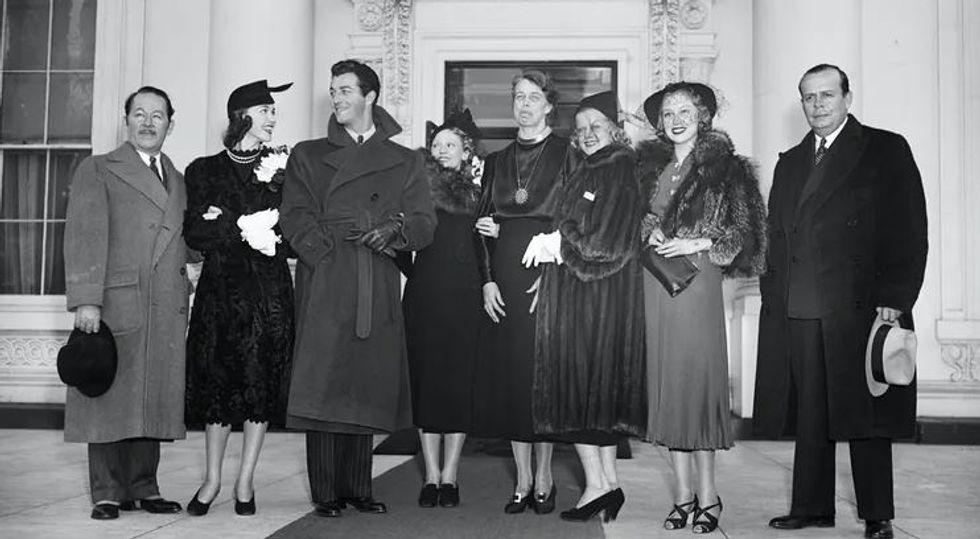 via Library of Congress

Radio and motion picture superstar Eddie Cantor coined the phrase in 1938. He reasoned that even Depression-battered Americans wouldn't begrudge a dime to a good cause.

Cantor's annual March of Dimes variety shows were simulcast by all the major radio networks, featured the biggest entertainers of the day and set a template for every all-star telethon broadcast by radio's successor.

"A little change from big people will mean a big change in little people!" chirped Molly of the radio duo Fibber McGee and Molly, the Hollywood Reporter reported in January 1942. Dime by dime, the campaigns raked in millions.

However, as with the victory over Japan and Germany in World War II, the conquest of polio was a surrender ceremony FDR did not live to witness. On April 12, 1945, he died of a stroke while visiting the Warm Springs spa.

Repurposed now as a fitting memorial to the late president, the March of Dimes campaign soldiered on. And, eventually, the medical research it supported paid off. On April 12, 1955, on the 10th anniversary of FDR's death, the field trials for the oral vaccine developed by Dr. Jonas Salk were declared a success. A wave of nationwide jubilation ensued.

In those days, there was no such thing as an anti-vaxxer: Almost every American knew someone who had been stricken. By the mid-1960s, together with a more easily administered oral vaccine introduced by Dr. Albert Sabin in 1961, polio had been effectively eliminated as a public health menace in the U.S. It exists now only in isolated pockets in the poorest regions of developing nations.

Shortly after the success of the Salk vaccine, FDR's fight against polio was given an elegiac salute in Dore Schary's play "Sunrise at Campobello," named after the island off the coast of New Brunswick where FDR was first stricken.

It showed the late president as Americans never saw him — flat on his back, carried on a stretcher, falling on his face and crawling backwards up the stairs — before he reemerges to public life, in braces and crutches, at the 1924 Democratic Convention.

A generation of hard-boiled theater critics waxed sentimental at the portrait of a president many had voted for four times. A "deeply moving chronicle … of a vigorous man struck down by a terrible illness," wrote Brooks Atkinson in The New York Times. "What rose from the invalid's chair was greater than what had climbed into it."

"Sunrise at Campobello" opened on Broadway on Jan. 30, 1958 — the president's birthday — and the film version premiered in New York on Sept. 23, 1960, in time to give another patrician Democrat with liberal credentials then running for president a vicarious boost. The opening night's proceeds from both the stage and screen versions were donated, of course, to the March of Dimes. It was a reminder of the other great battle that FDR waged, in public and in private.

From Your Site Articles
Related Articles Around the Web
coronavirus