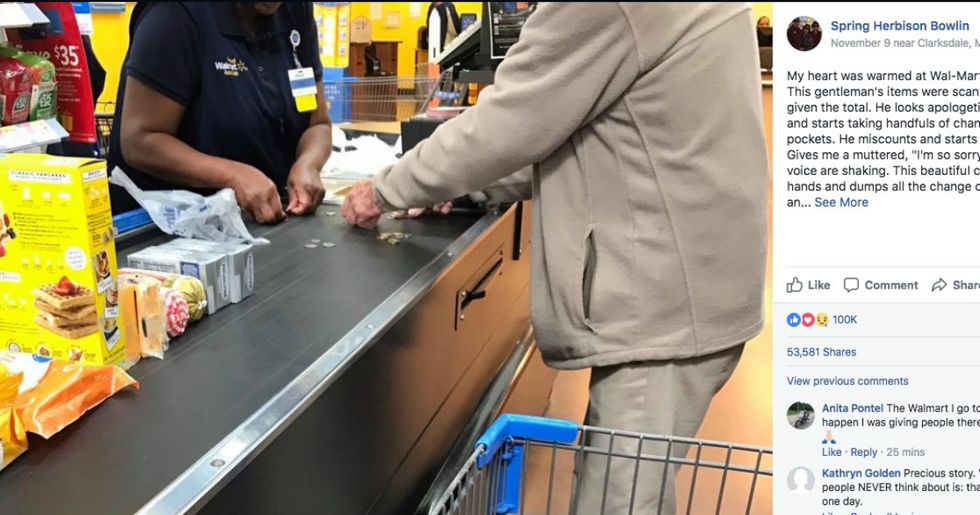 With all the talk these days of frightening stories about mass shootings, sexual predators, and escalating nuclear tensions, it’s easy to forget that most of our lives are lived outside of the headlines. People everywhere are performing acts of kindness and beauty, but we seldom hear of them. A great example of someone taking a simple interaction and creating a heartfelt moment comes from a Walmart in Mississippi.

On Nov. 9, Spring Herbison Bowlin posted a photo on Facebook of an elderly man and a Walmart cashier counting his change together. It’s already been shared over 53,000 times. “My heart was warmed at Walmart during lunch,” Bowlin wrote in a comment on the photo.

Bowlin was standing in line when an elderly man was having a difficult time counting his change while his groceries were being scanned. The man had miscounted his money and was growing frustrated, so he turned to the people behind him in line and muttered, “I’m sorry.” Then, the cashier took his change, dumped it on the counter and said, “This is not a problem, honey. We will do this together.”

After the man paid for his groceries and was on his way, Bowlin praised the cashier saying, “Thank you for being so patient with him,” and the cashier had a wonderful response. “You shouldn’t have to thank me, baby. What’s wrong with our world is we’ve forgotten how to love one another,” she told Bowlin.

The cashier’s simple words of wisdom are as beautiful as they are true.